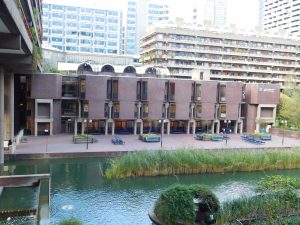 Guildhall School of Music & Drama is pleased to announce the remaining events in its summer season. A mixture of live and pre-recorded events from across all School departments will be broadcast for free via the Summer 2021 pages of the website.

Co-directed by Oliver Dimsdale and Victoria Moseley for Filter Theatre, devised with the Company

A small provincial town is shaken from its lethargy by the imminent arrival of a major railway line. Two railway engineers sweep into the lives of the locals with the force of a gale, challenging stale romances, sour marriages, and the power of local government.

Does the railway represent progress or a grave danger to the local community?

This bold new version of Gorky’s 1906 play is created by Filter, renowned for their original devised work and reimagining of classics texts, together with the Company of Guildhall School.

Escape into a fantastical world with Jonathan Dove’s spellbinding chamber opera, offering a story of magic, humour, romance, and drama told through vivacious and heartfelt music, in this online production which was created during the 2021 lockdown.

The production has been transformed from the physical to the digital stage, with the creative team and artists from across the School bringing the productions to life from their homes.

Written in 1994 for the Batignano Opera Festival, The Little Green Swallow is adapted from Carlo Gozzi’s 1765 fable of the same name, L’augellino belverde. It takes place 18 years after the end of another of Gozzi’s stories, perhaps more familiar to opera audiences: The Love for Three Oranges by Prokofiev.

Guildhall School premiered Adam Pollock’s English translation of The Little Green Swallow in June 2005 with a production conducted by Dominic Wheeler, directed by Martin Lloyd-Evans and designed by Dick Bird. The trio reunite for this new online version of the opera, bringing Dove’s enchanting work back to audiences once more.

Guildhall’s summer Chamber Music Festival returns with highlights from three days of performances from some of the School’s most accomplished chamber groups and student–professor collaborations, featuring renowned performers from the chamber music faculty.

Offering the chance to enjoy much-loved chamber music repertoire, the festival will include a performance by the Consone Quartet – BBC Radio 3 New Generation Artists and Guildhall School’s current Chamber Music Fellows – plus masterclasses with members of the Endellion String Quartet.

The spotlight shines on artists from Guildhall School’s Electronic Music department in this online showcase.

DAWs Open – a title referencing ‘digital audio workstation, or DAW’ – will serve to shine a spotlight on the body of work emerging from the School’s Electronic Music department, as well as allowing aspiring music producers (and Electronic Music fans) to gain an insight into the creative processes of artists and producers.

The student-led event will see a diverse line up of performances by students from the School’s Electronic Music department, which hosts a wide range of musical styles and disciplines within electronic and produced music – from Popular Music to Sonic Art.

The post-Second World War wave of immigration from the Caribbean to Britain brought with it a creative group of musicians who would make an important impact on British jazz and contribute to a more multicultural Britain. In this concert the Guildhall Big Band, led by Scott Stroman with guests including bassist Gary Crosby and saxophonist Steve Williamson, explore the music of Jamaican-born alto saxophonist Joe Harriott and the legacies of St Vincent-born trumpeter Shake Keane and Barbadian trumpeter Harry Beckett.

The performance will be preceded by a symposium chaired by University of Liverpool professor Catherine Tackley and featuring Williamson and Crosby; journalist, broadcaster and author Kevin Le Gendre; and trumpeter Gabriel Garrick discussing the influence of Caribbean jazz musicians on the British jazz scene past, present and future.

The Guildhall Jazz Orchestra is joined by three-time Latin Grammy nominee Jovino Santos Neto for a concert celebrating Brazilian jazz featuring the music of Hermeto Pascoal and Ivan Linz as well as Santos Neto’s own compositions for big band. Directed by Scott Stroman.

Three of Guildhall School’s jazz vocal ensembles come together for a joint year-end performance and celebration. Join the Guildhall Jazz Singers directed by Scott Stroman, the Vocal Jazz Ensemble directed by Clare Wheeler, and the Jazz Choir guest directed by Kevin Fox to mark the end of the academic year at Guildhall School.

Guildhall School’s pioneering BA (Hons) Performance and Creative Enterprise (PACE) programme was established in 2015 as a joint initiative between Guildhall and the Barbican with the aim of training visionary, socially engaged, multi-disciplinary, autonomous artists.

In Of Shadow and Light – a title inspired by a line from June Jordan’s poem Big City Happening – the graduating PACE class of 2021 present three richly diverse evenings of innovative, poetic and politically resonant performance works.

Following their performance, each artist will be in conversation live from Guildhall with Gilly Roche, Head of Interdisciplinary Practice and Programme Leader for PACE.

Please note some of these student-devised performances contain strong language and adult themes and content.

On the day of her 21st birthday party, Zoey realises she’s not quite ready to be a real adult. But an unexpected guest might just change her mind…

This uplifting dramedy aims to serve as a reminder to be courageous, to take things one step at a time, one day at a time, one bite at a time… and just keep moving.

Esra Jackson – A Piece of the Universe

A solo performance piece, incorporating music, acting and movement, which hones in on the topic of loneliness and its effects.

Through this experience, viewers will be encouraged to feel forms of meditation whilst listening on headphones, allowing one to move freely or not in the environment one feels most comfortable.

A live performance of Jasperi’s hauntological folk EP, exploring society’s weakness for nostalgia and the danger it brings. Featuring an orchestral backing and theatrical performance, this film is the first in a series from Jasperi of multimedia art exploring wider themes of fascism.

Marlow Mitchell – Queer Tales from Inside Your Closest

Riwa Saab – What Will I Tell My Children?

This piece of documentary theatre remembers the summer of 2006 in Lebanon from the perspective of people who were around six years of age at the time. Using performance, verbatim audio and shadow puppetry, the piece asks the question “how can we centre ourselves in the narrative to change the way we talk about politics and break the cycle of generational trauma?”

This performance contains descriptions of war, explosions and themes of suicide.

This performance explores themes of mental health, including anxiety around identity, cultural appropriation and isolation.