The Caribbean suggests sun, sea, calypso, and lazy days quaffing pina coladas on pristine white sand beaches – we’ll forget hurricanes for the moment!  But for we Brits that mostly very much relates to that part of the Caribbean which was at one time colonised by the British and the French.  But of course there is also Cuba which has something of a different vibe perhaps nowadays exemplified as much, if not more, by Miami than Havana.  The former, in many parts, is more Cuban than American.  Here calypso tends to be replaced by mambo and salsa and by mojitos, daiquiris and Cuba libres with table and bar top dancing by skimpily clad ladies and muscular men. 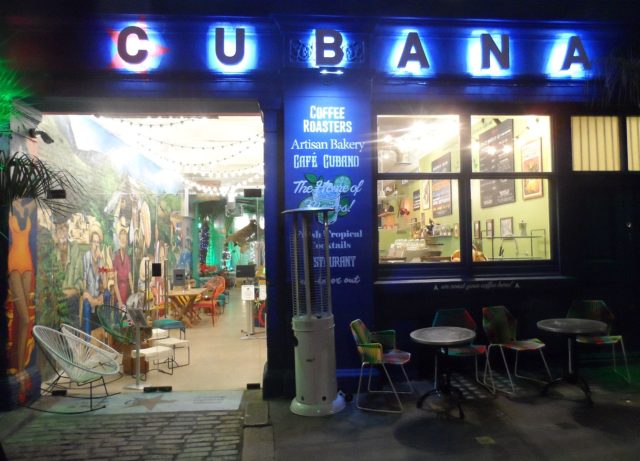 There’s a new Clerkenwell restaurant on Charterhouse Street, opposite the north side of Smithfield market and next door to the slightly more staid Comptoir Gascon.  This is Cubana which attempts to channel some of this Cuban vibe into the London bar/restaurant scene.  While there may not be table top and bar top dancing, Cubana offers a really bright and airy, could be described as garish, Cuban decor and environment and with reasonable cocktail prices can soon get you into the swing of things.  On cocktails the Happy hour – or rather Happy three hours – runs from 4pm to 7 pm and offers many of the cocktails at a two for one price which could mean a very late lunch could end up disappearing into a tropical haze by extending it through to the evening, although if bookings are strong you may get moved on.

Cubana Smithfield is not a one-off.  It is a second branch of the long established Cubana Waterloo in Lower Marsh so the concept of providing a Caribbean style atmosphere has a successful precedent already.

However the new Smithfield bar/restaurant has been a long time in its conception and launching.   It took nearly five years to get the permits, licences and planning consent to turn a derelict Smithfield warehouse into what is now a Cuban coffee roastery, bakery, Mojito bar and café-restaurant .  It reckons to have built on Cubana Waterloo’s increasingly strong food offer to also include an artisan bakery and coffee roasting featuring a 15 kilo batch Giessen roaster, to complement its Mojito and tropical cocktail bar. 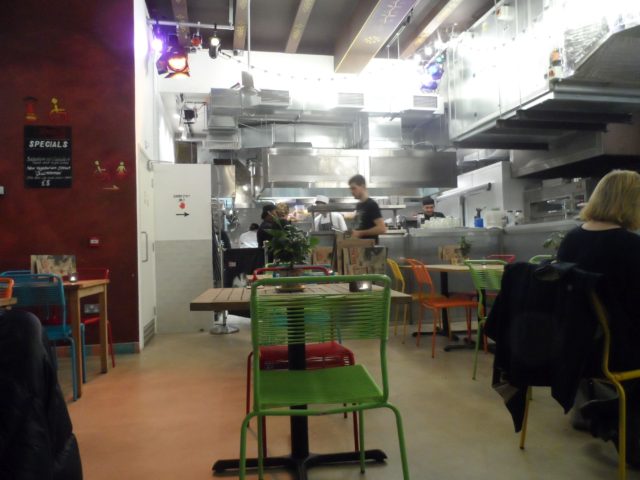 Part of restaurant area showing open kitchen at the back

The restaurant section is open for breakfast from 8.00am weekdays, serving waffles, orange-scented pancakes and cinnamon-vanilla French toast alongside omelettes, sourdough breads (baked on site), smoothies and fresh tropical fruits.  Lunch and dinner feature Cubana Waterloo favourites ranging from tapas through to salads, sandwiches, traditional Cuban dishes such as ropa vieja and slow-roasted marinated Cuban pork with black beans – alongside ‘barbacoa’ food grilled on the robata grill.  Cubana’s Street Food, much loved by Waterloo lunch-timers – is also available 11.30am-2.30pm – the bar-restaurant is currently licensed for early dinner to 9.30pm

“Cubana has always had a strong focus on food,” says Cubana founder and managing director, Phillip Oppenheim. “We serve authentic Cuban dishes and street food, but we’re probably best known for our famous cocktails and late night Salsa…. At Smithfield we aim to take our Cuban and Latin American food to a new level. We’ve always focussed strongly on quality ingredients and sourcing – we were one of the first restaurants to become 100% free-range and we’re delighted to say that we’ve recently received awards and commendations from Compassion in World Farming for our free-range policy.”

Cubana has also been certified by the Marine Stewardship Council and serves only MSC wild fish. Over recent years, the company  has built up a trusted relationship with Cuba resulting in a good supply of the very best Cuban mountain coffee to roast onsite – guaranteeing total freshness for the coffee made by expert baristas.

Cubana Waterloo, on which the Smithfield bar/restaurant is a almost a natural extension, is already known as ‘the place’ which introduced Mojitos to the UK in the 1990s. Since then, Cubana, with its bold mural of a Cuban lady across from the Old Vic theatre, has become a landmark of SE1.  The new restaurant features a similar striking mural at its entrance.

We went along on to the new Smithfield location on a Wednesday evening and were greeted friendlily as we entered and seated in the bright and airy restaurant area within a decor that looked more beach than traditional restaurant, with open kitchen at the end.  Naturally we started with Mojitos while perusing the rather unfamiliar menu with so many new dishes to try.  So we needed another Mojito each to help us make up our minds!  Plenty of Cuban white rum, lime ice and mint made the cocktails go down very easily indeed. 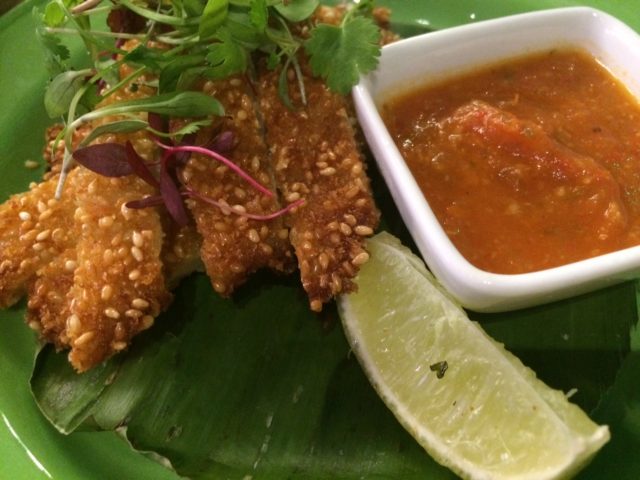 We decided to start by sharing three tapas dishes between us and then would decide on what we might want as main courses.  The dishes were the camarones con gabardina (prawns in a tempura batter) with a chili and mango salsa  highly recommended (£5.50) Papas Rellenas, described as a  Cuban and Latin-American favourite – a crunchy outer coating of sweet potatoes and potatoes, stuffed with Cuban-style lightly spiced beef, served with home-made tomato salsa, also very good (£5) and Pollo frito al escabeche con sésamo y salsa (marinated  chicken breast in a sesame panko tempura batter, served with fresh home-made tomato salsa) (£6) – good, but perhaps not quite so special as the Camarones.  There are also mixed tapas sharing plates offered at £7-10 which look to be great value as a shared starter. 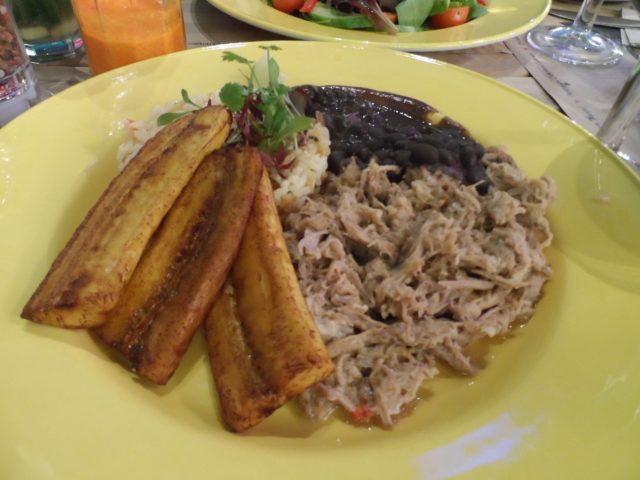 After these three we were reasonably full so we decided on sharing a single main dish between us, and a salad to go with it and we chose the Slow-roasted Cuban-style pork, marinated and slow roasted, served with Cuban black beans, chilli-rice and plantain. (£11).  Not overly impressed.  It was good but perhaps not special, but for value in comparison with main course dishes at most other restaurants in the area, was remarkably good value.  The accompanying salad though was top rate.  It was a mixed leaf salad with avocado at a very good price of £4. 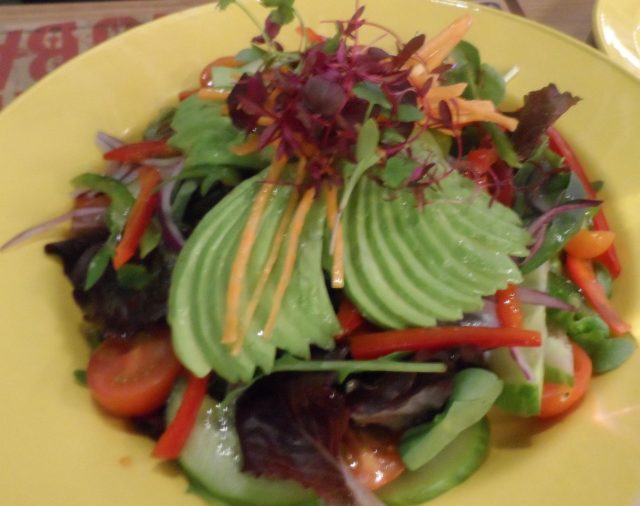 The beautifully-presented salad with sliced avocado

We did have a couple of desserts – home made gelato at £4.50 and the lime meringue marshmallow pie (£5).  Both satisfying the sweet tooth pretty well, although the choices were fairly limited.

There is a fairly limited wine list, but again relatively inexpensive with bottles available for between £15 and £22.  A few are available by the small and large glass and we chose a Chilean Carmenere and a Spanish Verdejo, both at around £6 for a large glass. But the big emphasis alcohol-wise is on Caribbean cocktails – particularly rum based one.  There is a large range of mojitos, daiquiris, coladas, caiparinhas and margaritas available as well as other Caribbean and Latin American cocktails and standard British ones.  The cocktails mostly come in at around £6.50-£7.00 and many are available by the jug.  Some are even less costly –Cuba Libre at £5.00 and the very British summer cocktail – a Pimms No.1 also at £5.  Jugs come in at £12.00 for the two latter cocktails and at £18 or £!9 for most of the others.  As noted above many are available 2 for 1 during the happy three hours!

There are other dining options – with variations through the day – it’s worth looking at the Cubana website to check these out – www.Cubana.co.uk .  These include breakfast, street food and Cantina lunches, pre-theatre and takeaway options among others.  It also sports a bakery/patisserie counter (excellent bread was provided with the meal) and its specialist coffee roaster specialising in Cuban mountain coffee.  At the time of writing it was offering filter coffee at £1 a cup!

So overall – great value as far as eating out in the Smithfield area is concerned – our meal and drinks cost was around £37 a head, but given that included a couple of mojito cocktails each and large glasses of wine accounting for just over half of that it does mean Cubana provides a lively, low-cost eating out option with the chance to explore a somewhat different cuisine.  There is live salsa music on Thursdays from 8.30 pm and on Fridays and Saturdays from 9.30 pm.  Not for the staid diner looking for something traditional in the way of food and ambience, but should appeal very much to the more adventurous in search of different tasty food and a very laid-back ambience.