Chefs at the Grange City Hotel in the City of London stepped in to provide breakfast for a group of Royal Marines who are attempting to break the World Record for the longest group drum roll, as part of a year of celebrations marking the 350th anniversary of the Royal Marines and to raise money for the Royal Marines Charitable Trust Fund. 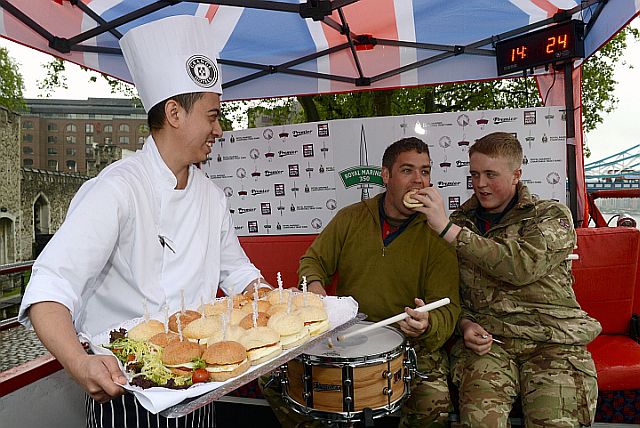 The Guinness World record attempt is taking place at the Tower of London and Chef Renard Ebasco (33) and his colleagues, who are based at the Grange City Hotel nearby, decided that they would provide bacon and egg butties in true Royal Marines style.

The attempt was launched on Wednesday evening by Hollywood star Tom Hardy, who said: “As a huge supporter of the Royal Marines, I wanted to show my continued support to these professionals in their 350th year and it is an honour to be invited to start this epic challenge.”

Corporal Bugler Stuart Warmington, who came up with the idea said: “I am overwhelmed with how the idea has grown. Originally it was going to take place in a car park in Portsmouth and now here we are at the Tower of London. We really hope to reach our £166,400 target for the Royal Marines Charitable Trust Fund, who do such incredible work on a daily basis.”

Richard Kenworthy, head of fundraising at the Royal Marines Charitable Trust Fund, said: “Fundraising like this is so important to our work supporting past and present Royal Marines and their families. We have an ambitious target of raising £6,000,000 by the end of the year which we sincerely hope we meet so we can continue to help those in need.”

Jamie Clarke, from Guinness World Records Limited, said: “We are really happy to support the Royal Marines and their charity fundraising appeal during this record attempt; we wish them every success!”
The Corps of Drums have their origins in the Royal Marines since day one (28 Oct 1664).

The drummers were very much part of the Royal Marines Infantry, which is why they have the thin-red stripe on their ceremonial trousers, like the Royal Marine Commandos, and not the thick-red stripe that the other musicians wear in the band.

The bugle was introduced in the mid 19th century as a device for signalling. Drummers in the Royal Marines were then expected to play both the drum and bugle and have been known as Buglers since 1855.

The Corps of Drums became fully integrated with the Royal Marines Band in 1979.

They are recognised as the leading Military Drum Corps around the world.

The Royal Marines were formed on the 28th October 1664, as the Duke of York and Albany’s Maritime Regiment of Foot.

The role of the Royal Marines and the Royal Navy is to protect our nation’s interests worldwide. Royal Marines units are either on operations, held on high readiness able to deploy quickly, or are engaged on military exercises.

Royal Marines recruit training is the longest basic modern infantry training programme of any NATO combat troops. The Royal Marines are also the only part of the British Armed Forces where officers and other ranks are trained at the same location, the Commando Training Centre Royal Marines (CTCRM) at Lympstone, Devon.

To see more of the Royal Marines Band in action, come along to the Beating Retreat at Horse Guards parade on the 3rd and 4th of June, and visit www.royalnavy.mod.uk/RM350 for further information.