All reports we are seeing suggest that there has been a flow of previous centre city residents seeking moves to the leafier suburbs, and further afield as companies perceive the financial benefits of having their staff work from home – at least part time.  This has enabled companies to downsize their city centre locations and thereby reduce overheads, as well as providing employees with a perceived better work-life balance.  But has this adversely affected Barbican property valuations?

Well, initially the move away from central city locations certainly seems to have had an initially negative impact on Barbican flat prices, but there are increasing signs that this may prove to be a temporary phenomenon.  As one of our local estate agents puts it: “At long last we are seeing a meaningful return of buyers to the Barbican.  I think a combination of vaccine confidence and shops re-opening have been the turning point to serious buyers returning to the City.  Not so much City workers (still only about 30% have retuned) but retired and semi-retired buyers are back.”

This agent goes on to note: “Interestingly Far Eastern buyers, China providing the main group of prospective purchasers, have started to look at the Barbican, this is is providing a new market not previously seen before.” 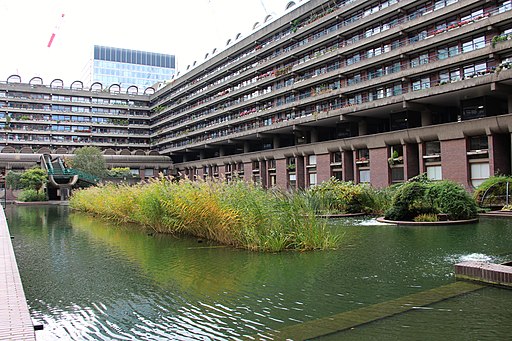 A boost within this category appears to be coming from prospective buyers from Hong Kong in particular – borne out by some other findings too (see below):

Crossrail too may, at long last, be beginning to have an impact on Barbican flat prices. Despite a four year delay, latest research, also by Benham and Reeves, has found that house prices surrounding Crossrail stations are still largely outperforming the wider areas in which they are located.

Last week, a ‘crucial milestone’ was reached as testing began on this long-awaited route and the research suggests that, on average, property values in postcodes home to a Crossrail station sit 17% higher than the wider area.  The Barbican will benefit from Crossrail stations at both the eastern and western extremities of the estate in Liverpool Street/Moorgate and Farringdon/Barbican stations.

The Liverpool Street area, where prices are supposedly benefiting by as much as 55%, is said to be home to some of the largest Crossrail property price premiums.  However none of the Barbican’s specialist estate agents are yet mentioning this prospective boost to prices, but it could increasingly become a defining factor in the resumption of property price growth in the months and years ahead.

Since Crossrail was approved in July 2008, research is reported to have shown that property values in postcodes due to benefit from a station have climbed by 65% on average, far higher than the 39% seen across the UK as a whole. Crossrail stations within London have seen prices increase at an even greater rate, up 71% since 2008, although this rate of growth sits at a somewhat similarlevel as London as a whole!

Benham and Reeves has also analysed London property market activity since July of last year, when Boris Johnson announced that up to three million Hong Kong residents are to be offered the chance to settle in the UK.  Since this announcement, there have been an estimated 51,228 residential properties sold across London. This is a decline of -35% when compared to the 51,228 homes sold between July 2019 to April 2020. Across prime central London alone, transactions are estimated to have fallen by 45% during the same time period.

Research by lettings and estate agent, Benham and Reeves, for has shown that the announcement of the BNO visa offer in July of last year has seen transactions from Hong Kong homebuyers climb by 144% in the capital.  (If you’re from Hong Kong and are a British national (overseas) you and your family members can apply for a British National (Overseas) – BNO – visa. This allows you to live, work and study in the UK.)

However, while the London market overall has stuttered, the research quoted has found that the BNO offer has seen the number of Hong Kong homebuyers transacting across the capital climb.  Since July 2020, Hong Kong nationals have accounted for an estimated 4% of London market activity, up from just 1% in the same period the previous year.

As a result, it is estimated that Hong Kong buyers have transacted on some 270 homes in the prime London market since July of last year, and 1,932 across the capital as a whole.  This means that when looking at Hong Kong buyer interest alone, the prime London market has seen a 106% increase as a result of the BNO visa offer, with a 144% uplift across the entire London property market.

The Barbican, with its gardens and lakes, and brilliant public transport access (at last about to be further boosted by the advent of Crossrail), makes for an interesting compromise destination for would-be rural movers who can’t quite bring themselves to break away from city living.  Given that most companies which are planning to allow some staff to work from home, will still insist on occasional attendance at their city centre offices, then that makes an ultra long distance move somewhat less attractive, and expensive to keep up in terms of an occasional lengthy commute.

With thousands of workers now working from home since March 2020, having employees set up a desk at the kitchen table has become an attractive option for companies looking to reduce overheads and slash rents.  According to the Office for National Statistics, almost half of British workers have been working away from their office or factory, with many companies now planning to embrace a mix of home and office working.  This sudden change in circumstances has meant many people have taken on an unanticipated amount of running costs. If you are working from home, you may be able to claim tax relief for some of your bills.

If you have to work from home, because your office or factory is closed, then you can claim tax relief, but only for the things to do with your work. These include business telephone calls or the additional cost of gas and electricity for your work area.  However, if you use things for both business and private use, such as broadband access, then you cannot claim for these.

You cannot, as a rule, just claim any tax relief if you choose to work from home. However, if you decide to work from home voluntarily, there may be other expenses you are entitled to. For example, if you set up a business from home, and you operate as a sole trader or partnership, you can include your business costs in your self-assessment tax return. These include a proportion of the cost of things such as council tax, heating, lighting, phone calls and broadband.

The above advice comes from Victoria Pearson, a Partner at Perrys Chartered Accountants (https://perrysaccountants.co.uk).

Glen Cook at Hamilton Brooks:  We are now seeing the Green Shoots Of Recovery, sales viewings have tripled and slowly but surely offers are trickling in, the relaxing of shops/bars/restaurants opening have produced a 20% increase in City footfall which is great news for Retail in the City. We are also seeing a return of double vaccinated buyers feeling safer returning to the City to conduct viewings which is more good news.  I don’t predict price rises, I think the market is too fragile but at least the opportunity to sell has returned.

We have also seen the emergence of Chinese buyers, not really seen before, I put this down to all the fashion shoots that take place in the Barbican which make it into overseas Fashion magazines and on-line, the Barbican is/was now perceived as ‘cool’ and ‘edgy’ for younger overseas buyers.

Presentation of a property is now more important than ever, please seek advice on what may need to be done to present any property in its best light, most issues are simple and solvable.

The outlook in the absence of another outbreak later in the year is very good in my opinion, but prices need to be realistic.  www.hamitonbrooks.co.uk

Marco Fugaccia at Hurford Salvi Carr:  And before we could imagine, its Spring 2021. !As we see sign of “unlocking” taking place we have also seen an increase in buyer registrations, especially for Barbican apartments. In fact our last two Barbican sales resulted in multiple interest. We hope that as we move into the expected busiest semester of the year and more workers return to see signs of green shoots.

Although there are certainly positive signs, buyers are still being cautious and it is imperative that properties coming onto the market are correctly priced to attract interest.  www.hurford-salvi-carr.co.uk

Nicola Lee at Nicola Lee Ltd: I’m delighted to say that we have turned a corner; buyers have returned and are keen to view everything from studios to the 3- to 4-bedroom properties. Under lockdown there were 12 tower flats on the market – I have never known this many to be up for sale simultaneously in my 25 years of selling in the Barbican. This amount probably caused prices to drop, as buyers had a choice of properties on which to make an offer. A number of these flats are now under offer, and we have had potential buyers missing out on a property; this level of interest helps prices stabilize, and may even lead to an increase. Historically, spring/summer is a pivotal selling time and this year is no exception. I am looking forward to the coming months as the City of London removes its mask and breathes more life back in to flat sales! www.nicolalee.co.uk

Nick Scott at Scott City:   Due to the Covid restrictions being lifted and seemingly us as a country having the epidemic now under control there has been a marked improvement in the sales market in the Barbican. We have also been helped by the stamp duty holiday and low mortgage rates and with the City generally busier confidence has returned to the market.  If you’re thinking of selling please do not hesitate to contact us for a no obligation valuation of your property.  www.scottcity.co.uk

Tina Evans at Frank Harris:  We are still seeing a lot of interest from tower flat buyers, people are looking to re-locate into town despite the newspaper reports to the contrary, but we have very few tower flats remaining on our books, if you are considering selling a tower flat please do let us know. Buyers are coming back to the City centres and with most of the City offices requesting staff to come back a few days a week from June I predict an uptick in sales of the smaller properties as the summer continues.  www.frankharris.co.uk

Glen Cook: Still a tricky market, we have seen rental re-negotiations on renewal’s, but as we see a bigger return of commuters in June, we should see a pickup in demand, from commuters who don’t want or like commuting.

Lindsay Lee at Nicola Lee Ltd: Now that spring has arrived, and people are returning to the City, we are getting many more rental enquires. It’s good to see that, although rental values haven’t yet returned to previous highs, they have stabilized. As ever, presentation is key, and properties in good condition find a tenant faster.

Nick Scott:  Demand for Barbican rental property is very good and rental values are showing a sign of an increase with the footfall and confidence slowly returning to the City. We have a good selection of studio, one and two bedroom flats available