Foxlow, the Hawksmoor offshoot on St John Street which opened in November, hopefully will not suffer the fate of its predecessor, North Road, the Scandinavian themed restaurant which gained a Michelin Star in its first year and closed down shortly thereafter still being unable to attract sufficient custom to keep it going. A Michelin star obviously doesn’t guarantee success!

Somehow we doubt Foxlow will attract a Michelin accolade. Its offerings, and even perhaps its décor, are just not of the type which is likely to appeal to the Michelin inspectors – but nonetheless is none the worse for that. Foxlow has totally transformed the space – indeed as is one of the modern-day restaurant styles has added stark white walls and distressed white tiles into the décor to make it look a bit like a converted older warehouse/industrial space. Wooden tables, floors and chairs and black leatherette banquettes (red banquettes upstairs) complete the makeover. It has also added a further restaurant area on the 1st floor so now has the space to generate very good revenue providing it can fill it – which it certainly seems to be able to do so far. 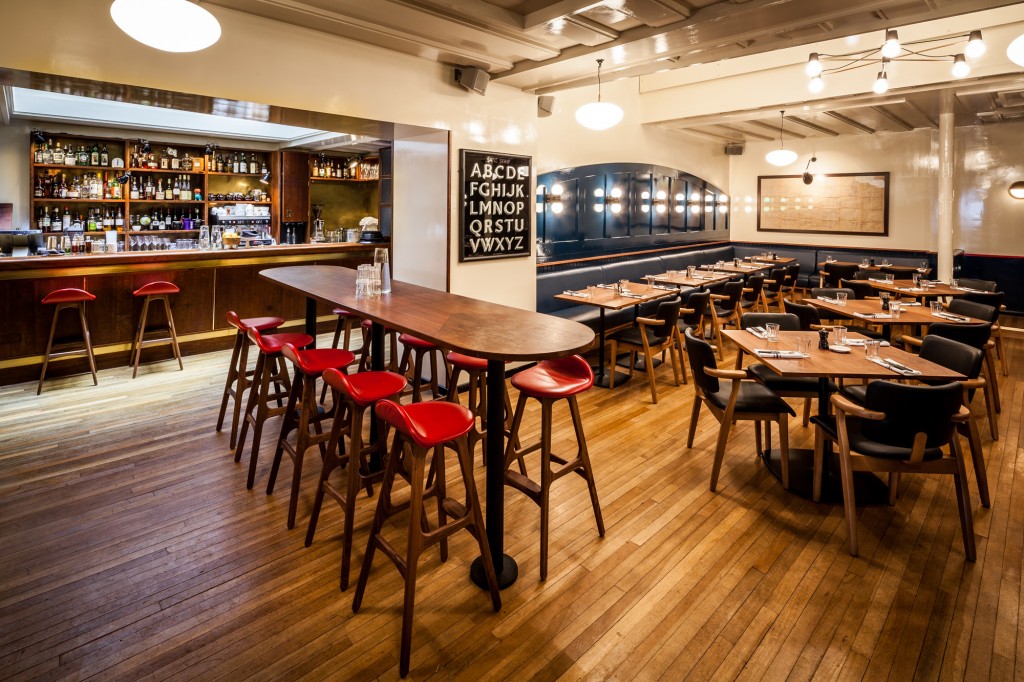 The food and ambience undoubtedly does appeal to the diners. It was just about full on the Wednesday evening we ate there with clientele from a broad mix of ages and I have to say the dishes we were served were of a high standard as befits its Hawksmoor parentage. Indeed the restaurant appears to have found a formula for providing what the average diner may want to eat regularly, rather than the fancy, and usually very pricey, creations of the high end foodie establishments.

Foxlow’s initial promotional material described its ethos as to become a ‘neighbourhood’ restaurant – which is fine, except the neighbourhood – Clerkenwell/Smithfield – doesn’t have a huge number of residents apart from the Barbican and Golden Lane estates, which are close enough, and a few converted loft apartments. So Foxlow is probably having to rely for its clientele on city and city fringe office workers – and as a destination restaurant for those Hawksmoor aficionados who want to see what is going to be different about its progeny – and in this it certainly seems to have had considerable success.

One restaurant critic described the Clerkenwell area as beginning to catch up with Brooklyn and Queens across the East River from New York in terms of restaurants and quality, but it doesn’t have the population strengths of those areas, although I’d reckon its latest mix of restaurants as being as good as, if not better than, the trendy North American area quoted. I have a son living in Brooklyn so have been to a few recommended restaurants in that vicinity and I would suggest Foxlow is better in terms of ambience and cuisine than any I have eaten in there.

We were persuaded into sampling a house cocktail (didn’t take much persuasion!) and I’d certainly recommend the St John’s cocktail (£8.25) – (Gin, Prune Eau de Vie, Honey and Lemon) – probably excellent for a sore throat too. Had wanted to try a Dr Pierre Extra-Ordinaire (£7.75) – (Calvados, Absinthe , Peach and Lemon) but they were out of one of the ingredients.

As one would expect from a Hawksmoor macho carnivore-appeal establishment, steaks and other large meat dishes dominate on the Foxlow menu. As well as three standard steak offerings – rib fillet at £18, D-rump at £20 and Deckle at £22 – there are also some impressively sized and priced other cuts available on the daily specials board. And the steak offerings are supplemented for the carnivore by the Eight Hour Bacon Rib with Maple & Chilli (£16), Ten Hour Beef Shortrib with Kimchi (also £16) and Iberico Pork Pluma (£18). There are also two fish dishes on the grill menu – Monkfish with Chermoula at £18 and House-cured Salmon (£12) and a vegetarian option in Imam Bayildi (a spiced aubergine dish) at £10. The menu is not huge. Apart from the starters, salads and sides there is nothing else in terms of savoury dishes and one supposes that if none of the mains appeals one could always have two or three starters or double up on the very interesting looking salads. 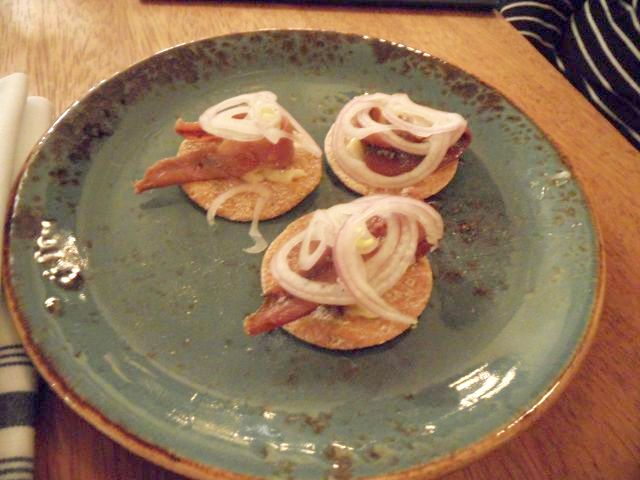 I have to say service was excellent and our waiter well versed in the intricacies of the menu – and as one can see from some of the menu terms noted above also adept in translating some of the unfamiliar terminology on the written menu for us.Also prospective diners should be warned that the mains are served without any accompaniments which does effectively force one to order one or two sides (probably large enough for sharing) which does up the overall cost.

To begin we were tempted with a starter snack of anchovy and goats butter crisps (£3). We both like anchovies so these went down extremely well. A simple combination but very tasty indeed. For starters I chose Crispy Five Pepper Squid (£7) while my companion chose the Asparagus with Ricotta and Hazelnuts (£8.50). Both well presented and good dishes. 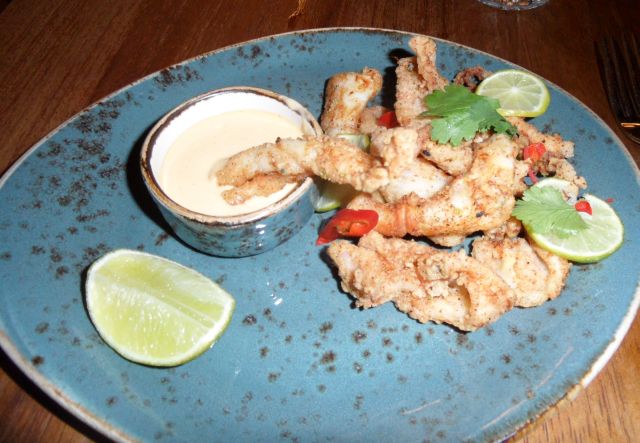 For the mains we went with the rib fillet steak and the monkfish with skin-on fries with chicken salt (£3.50) and spring greens with lemon and garlic (£4.50) as sides. The steak was cooked as ordered and was nicely tender and tasty. The fish appeared to be a whole skin-on monkfish tail, perhaps less appreciated, while the sides were of a high standard. Plenty of food for the money.

Desserts: We avoided the Elvis Presley sandwich (£5.25) – a potentially heart stopping (literally) concoction comprising ice cream with peanut butter and banana compote and sandwiched between brioche fried with cinnamon sugar, topped with peanut butter sauce and candied bacon cooked in maple syrup and are thus still alive to report that such an indulgent sweet is available. Instead we went for Milk Panna Cotta with Yorkshire Rhubarb (£5) and Chocolate Orange Delight (£5.75) both of which were rather lighter and very good indeed.

Overall a very pleasant meal – washed down with wine by the glass. Interestingly Foxlow has a seemingly better value wine list than most other restaurants in the area with house wines starting as low as £16 a bottle – and for even better value you can bring your own bottle(s) on a Tuesday evening which will be served back to you with a £5 corkage charge.

Cost for a typical three course meal at Foxlow with a bottle of house wine would come out at around £40-50 a head – probably a little less than at one of the Hawksmoor restaurants. Additional indulgence in some of the excellent recommended cocktails however would, of course, further up the ante! We are blessed with a number of excellent eating establishments within walking distance of the Barbican and we can certainly recommend Foxlow as being in among the best of these.