We do receive the occasional hugely self-indulgent treat from running this website and Barbican Life magazine and this week we were invited to participate in a GB/French oyster tasting competition hosted at Boisdale of Bishopsgate and sponsored by Boisdale, Wright Brothers and the City of London distillery.  Oysters are not to everyone’s taste, but they are to the writer’s, who participated with gusto. 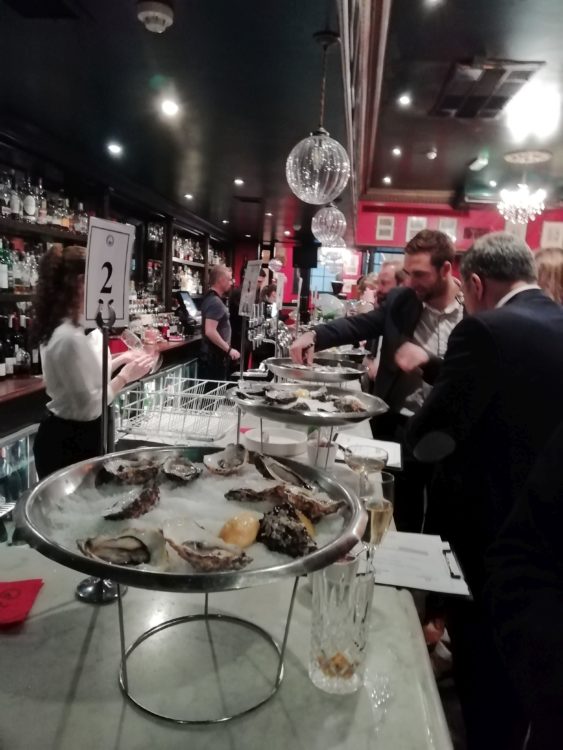 Oyster tasting at the Boisdale of Bishopsgate Oyster Bar

After an hour or so of judging and almost 1,000 oysters shucked, the results from this, the fourth Boisdale & Wright Brothers Oyster Championship 2019, a blind tasting was held to identify the finest oysters in the UK & France. This saw two varieties of oyster tasted from the British Isles and France and eight producers, were represented in front of some 60 judges including notable chefs, food critics and restaurateurs.

After the rigorous and nail-biting blind tasting, overseen by food writer Bill Knott  alongside Ben Wright and Robin Hancock of Wright Brothers, the judging panel  awarded Gold, Silver and Bronze in Rock and Gold in Native categories. The judges marked the oysters on appearance i.e. meat-to-shell ratio, flavour & minerality. The winners were as follows:

Boisdale founder and owner Ranald Macdonald said, “It was an extraordinary event with the mission to elevate the profile of the humble oyster. Most of the legendary London fish restaurants, including Boisdale of Bishopsgate (formerly Bentley’s Oyster Bar & Grill 1969-2001) – were invariably oyster bars to start with, where one could enjoy delicious molluscs cheaply and with abandon.  Oysters provide the human body with a number of unique nutrients and minerals and are one of the most sustainable things to eat, certainly the most sustainable to come from the sea. By hosting this Championship annually, we are hoping to change the perception of oysters as a luxury item for the few and get everyone eating oysters again.”

Wright Brothers co-owner Ben Wright says, “Once again, it has been a pleasure to bring together some of the UK and France’s finest oysters as well as many of London’s finest chefs and ostreaphiles.

The quality of the oysters this year bears testament to the renaissance in both oyster farming and consumption which has taken place over the last five years, with growers taking a quality and craft-driven approach more akin to winemaking, whilst chefs and consumers are increasingly interested in variety, quality, different tastes and flavours as well as more creative ways to enjoy this wonderful seafood. In December 2002, Wright Brothers Wholesale sold a few hundred oysters to 20 customers. This Christmas, we will sell half a million oysters to several hundred customers.

With increasing public interest in sustainability and clean oceans, and initiatives across the globe to restore oyster reefs in order to regenerate the great estuaries and waterways of the world, the future looks bright for these miracle molluscs.  Unlike any other food I can think of, the more we produce and eat, the better the environment. Today was a fitting celebration.”

While one has to bow to the selections made by the panel of true experts, the writer has to admit that he chose neither the winner of the Rock Oyster nor the Native Oyster categories.  In each case he unwittingly chose British varieties as his favourites.  For the main Rock Oyster tasting he rated the eventual bronze medal winner from Morecombe Bay as his favourite, followed by the eventual silver medal winner from Cadoret Riec-sur-Belon from north Brittany.  So reasonable taste obviously but not complying with the expert consensus.  For the Native Oysters he chose the Fal Estuary oysters from Cornwall supplied by the Cornish Shellfish Company as his favourite.