For perhaps a lighter choice of restaurant food it is hard to beat the more flavoursome take on French style Galettes and Crepes and L’Ami Malo in Artillery Passage, close to Liverpool Street Station, does these really well.  It offers a good choice of savoury galettes and sweet crepes to whet one’s appetite and these are filling enough to more than satisfy the discerning diner.  Indeed the range of flavours on offer makes this small, very French, restaurant down a tiny narrow street, packed with bars and restaurants, a great choice for something a little different from your average restaurant fare. 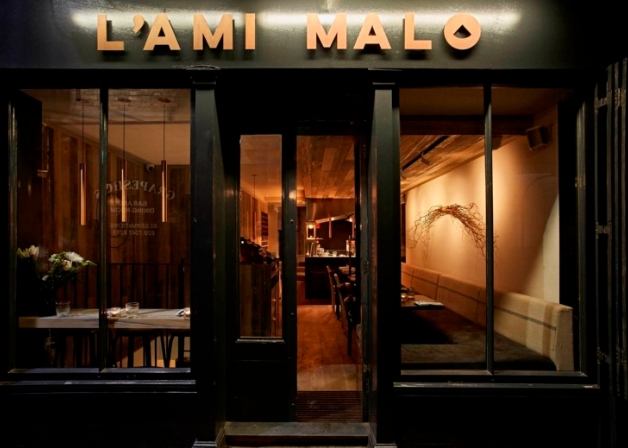 We were there for an early meal on a Thursday evening and the restaurant, which we were given to understand can accommodate around 40 diners on ground floor and basement eating areas, was busy.  We were seated at a small table set in an alcove opposite the open kitchen which had the advantage of having no other diners close and also enabled us to hold a civilised conversation without being drowned out by loud piped music (there was some but it was kept at a really low volume) or the voices of other diners.  It was only a table which would seat two diners, so for larger parties it wouldn’t have worked.

Although the menu is not a large one, it was fascinating to read and we took our time ordering helped by recommendations from our attentive waitress.  There was so much which looked good on the menu.  Unsure how large the servings were going to be, we opted to order starters and then when we’d had these we’d order the mains later. 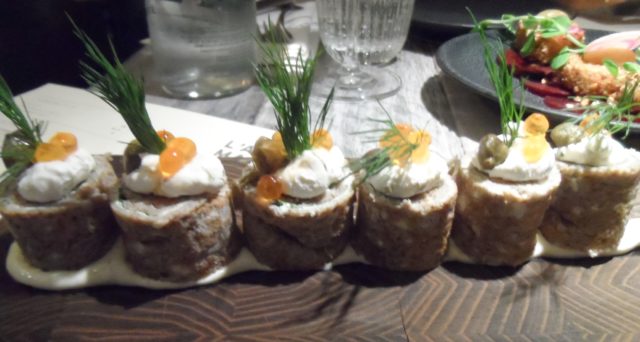 We eventually opted for the smoked salmon maki roll with capers, keta caviar, dill, shallot on a smear of crème fraiche (£8.50) and Buckwheat goat’s cheese croquettes, roasted heritage beetroot, kasha seeds (an East European variety of buckwheat), and a honey and thyme dressing (£7).  Both were excellent and beautifully presented. 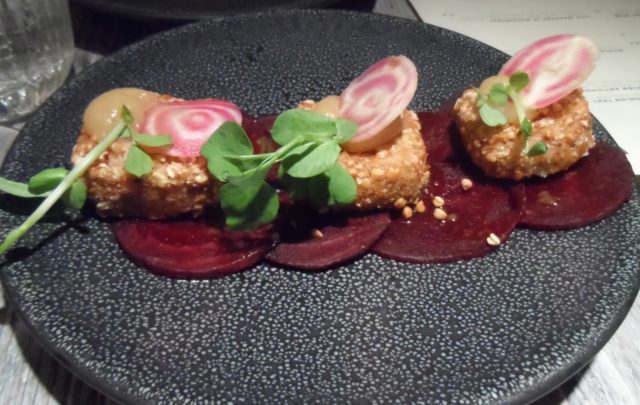 As I was on antibiotics I laid off the alcohol and stuck to diet coke (£2.50), served on ice with a slice of lemon.  My dining partner had a glass or three of an organic Touraine rosé wine (£8.50 a glass) which she declared to be extremely good.  There is a limited wine list with all available by the glass, but wine by the bottle (all French) was from a slightly pricy £23 up. 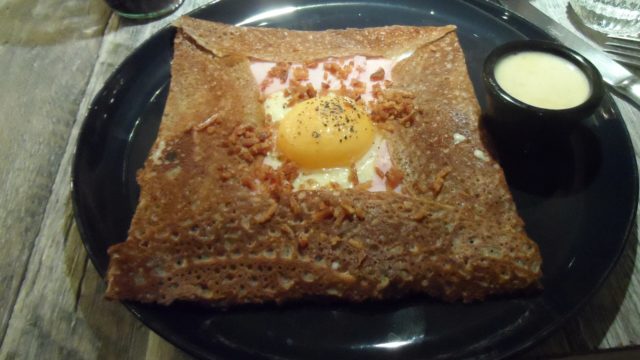 Having safely disposed of our starters we checked out the menu again for main course – mostjy galettes – and I chose the smoked ham one with a prominent duck egg , maple cured bacon, and a comté cheese sauce (£9) a very tasty combination which went down well with the diet coke.

My companion went vegetarian with a Mushroom fricassée galette, served with spinach, mixed leaf salad, parmesan, and a tarragon chimichurri sauce (£9.50).  We both sampled each other’s dishes and would recommend them, particularly if one is looking to keep the costs down. 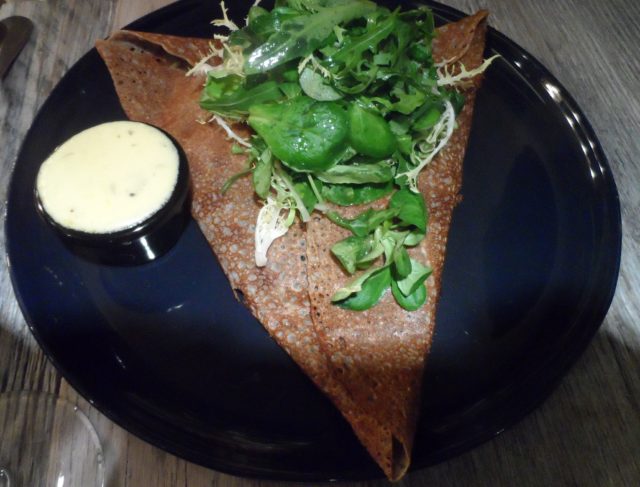 Unlike crêpes , which are usually made from wheat flour, galettes are made with buckwheat, which would seem to have positive health attributes, and are gluten free.  Galettes, as made in French Brittany (and as at L’Ami Malo), are generally savoury and made with the aforementioned buckwheat flour, water, and eggs.

And so to dessert!  We had found the first two courses decently filling so we opted to share a dessert and chose the Soufflé lemon & blueberries crêpe (£9).  Given the preparation time for this there was a slight wait, but that was well worthwhile.  It was delicious. 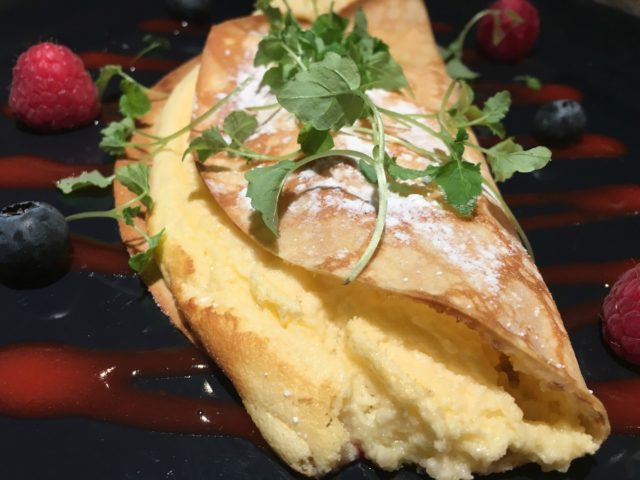 All in all, the food came to a total of £43 for two – by London standards a pretty low cost meal out and with some great flavour combinations is highly recommended if you hanker for genuine French-style savoury galettes and sweet crêpes.  Accompanying drinks are a little on the expensive side if one goes for alcohol, but perhaps no more so than most licensed restaurants.

If you are thinking of trying it out it might be advisable to book given the relatively small restaurant size.