Game on at the Jugged Hare

Game on at the Jugged Hare

Since its opening nearly two years ago, The Jugged Hare, on the corner of Silk Street and Chiswell Street, at one end of the old Whitbread Brewery buildings which now house the Montcalm City hotel inside its listed façade, has developed a reputation of being one of the best London restaurants if one wishes to eat game in season.  It was the site of the former Kings Head pub – a then favoured drinking haunt of students from the Guildhall School of Music and Drama just down the road.

Wild game is now well and truly in season with hare becoming available on August 1st, Grouse on the ‘Glorious 12th’ of August and pheasant on October 1st – not to mention other game such as wild boar, wild duck and partridge appearing on the regular menu, which also features jugged hare,  or as game specials.  The latter change daily and the day’s offerings may be viewed on the website – www.thejuggedhare.com.  The website notes that the daily-changing specials board often features less common species such as black grouse, moorhen, golden plover, even squirrel, as well as wild boar and deer. 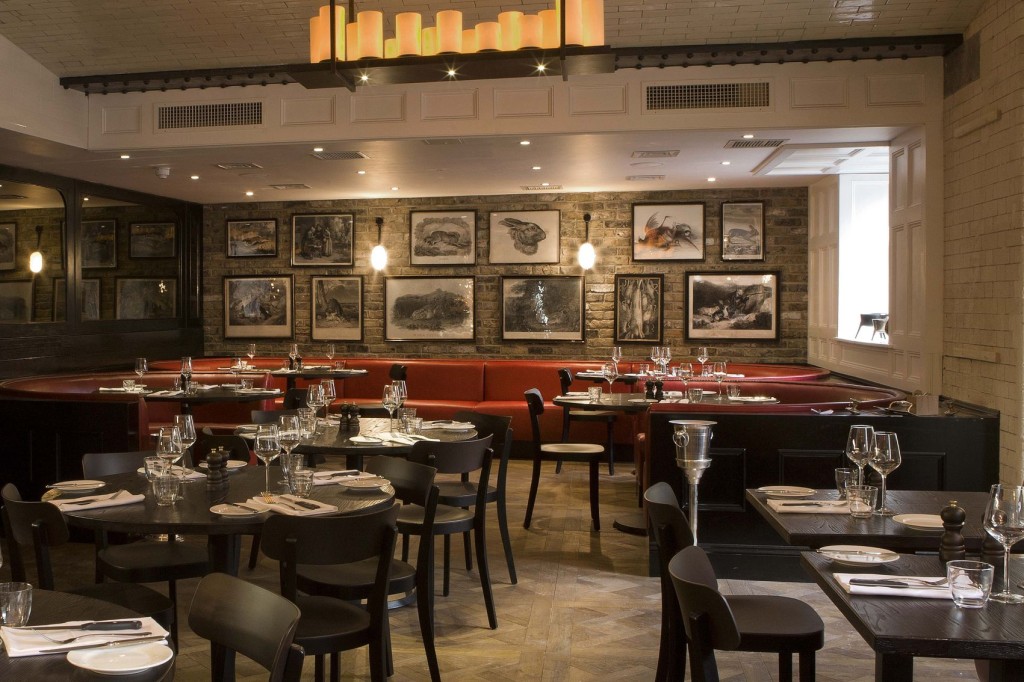 We were invited to try out the new game menu and accepted with alacrity as we are definitely partial to the taste of game – indeed we might even prefer it to be longer hung, and thus more ‘gamy’, than likely to be served in any restaurant as one suspects the majority of people might be turned off at a perhaps a ‘high’ serving of pheasant, and one doubts that health and safety authorities would see it as acceptable either.  But then we like fresher game too so were unlikely to be disappointed providing the dishes were well prepared and served.  And this was very much the case at The Jugged Hare.

Lest readers of this who are perhaps not so keen on game should be put off, The Jugged Hare’s main menu is more mainstream with only two or three game main dishes on offer every day.  There is plenty of other fare available to suit almost any taste and, of course one can mix and match.  There is, as noted above, also a chalkboard with the additional daily game specials noted – in season.

The meal started well with a game terrine en croute from the specials board and dressed dorset crab with lemon mayonnaise and melba toast from the main menu, both of which were excellent.  The game terrine is normally served with piccalilli but I had mine without as piccalilli is not exactly one of my favourites!

The main courses were even better.  We had whole roast partridge off the specials menu and whole spit roast grouse from the main. Both were served with the Jugged Hare’s take on game chips (lattice crisps), savoy cabbage, pate en croute and red wine jus.  The partridge, perhaps because it is a smaller bird than the grouse, also came with mashed potato and remarkably tasty and partly crispy puy lentils.  Both birds were extremely tender and very good indeed.  Warning though – if you don’t like your grouse medium rare make sure you ask for it well done as it tends to be prepared on the rare side – or at least was when we had it. 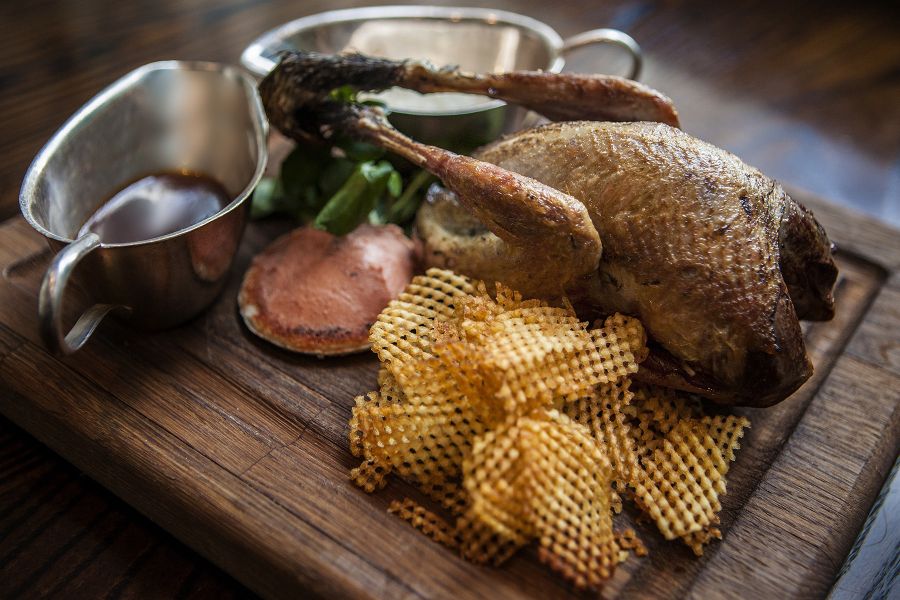 We washed the first two courses down with a very pleasant bottle of Argentinian pinot noir red wine and a bottle of sparkling water.

The desserts were not quite such a success.  The Jugged Hare’s take on bread and butter pudding was deemed stodgy and didn’t really seem to go with the butterscotch sauce provided – but perhaps that’s just a matter of taste.  It was far away from the traditional offering with crunchy edged slices of bread in a sultana loaded egg custard.  Note to chef – sometimes traditional versions are best!  I ordered blackberry and pear cobbler off the presented dessert menu – not a blackberry in sight and although pleasant enough didn’t seem to contain pear either, but peach. I didn’t send it back as I’d eaten about half looking for a blackberry, obviously without success!  I now note that the menu on the website only has peach cobbler, but I don’t think I dreamt that it said blackberry and pear on the menu we were presented with and as I do like blackberries in desserts the peach cobbler delivered was somewhat disappointing!

The Jugged Hare is obviously a great success – it was packed on a Tuesday evening – making it a little noisy.  Its main problem as a venue is that one can have literally to fight ones way through the bar area – which was heaving – to get to the restaurant section. Obviously success brings its own problems!

However, I would definitely recommend the restaurant’s game offerings on the evidence of what we were served.  It is obviously an aspect that the restaurant managers, ETM Group, and its owners, Ed and Tom Martin, are personally particularly keen on and this shows in the choices available and their preparation.  If you like game it is very well worth a visit, and even if you don’t there are plenty of other well prepared offerings on the menu.  You can even take in your own brace of pheasant or grouse (already plucked) and the restaurant will prepare and cook them for you at a negotiated price.

Service started off good and attentive, but slowed somewhat when it came to the time to order desserts – but then the restaurant was exceptionally busy for a Tuesday.

There is a bar snack menu – much of which is also available in the restaurant as an additional appetiser.  It includes game offerings in season like crisp fried grouse legs with spiced bread sauce (tasty but not sure about the spiced bread sauce), various game meat sliders and wild boar head croquettes.  There is also a more comprehensive pub menu, although where anyone would find space to eat it during the evening rush I don’t know.

Pricing is probably around average for the area – more than the Cote Brasserie across the road, but less than at many other Clerkenwell restaurants – perhaps £30-40 a head for three courses without wine.  The Jugged Hare does serve very drinkable house wines at £17.50 a bottle and there’s plenty of variety in the £20-£40 range.  For those who have come into money – city bonuses? – there are some, presumably excellent, ultra high priced offerings, although have never had the spare cash to try them out!

Reservations (advisable) may be made on  020 7614 0134, or can be made online at www.thejuggedhare.com.  The pub and restaurant is at 49 Chiswell Street, EC1Y 4SA around 50 yards from The Barbican Centre’s main entrance.  It is open for breakfast, lunch and dinner seven days from 7 am.  Kitchen opening hours are from 7.00 to 10.30, noon to 3.30 pm and from 5 pm to 11 pm (extended to midnight Thursday to Saturday).  Bar food is available from noon to closing.  For those attending Barbican or Guildhall School events there are also pre-theatre and post theatre options