It’s game on at The Jugged Hare as the start of the shooting season approaches. The London gastropub – the nearest restaurant for some Barbican residents –  that reckons to be fast becoming the authority on game will be plucking, trussing and cooking up a storm this game season right through to February next year.

As the name suggests, The Jugged Hare in the City of London is dedicated to enthusing and educating its diners about game. Innovative menus with daily-changing specials, sourcing from respected suppliers throughout the UK (and further afield into France, Germany and the Czech Republic) and exciting seasonal activities including the Glorious Grouse Race, traditional game tasting dinners and even a ‘Pheastival’ in November make it the only restaurant to shoot down to!

The Jugged Hare’s open season kicks off with its eponymous 18th century dish, jugged hare. Wild hare returns to British menus on 1st August following the six-month ban on hunting which allows the animals to breed. Cooked in a traditional tall jug, the slow-braised hare meat is finished off with a sauce of its own blood and is one of the finest examples of this under-used meat you will find in the capital. Now is the time to taste it at its very best.

Come The Glorious Twelfth (12th August), ETM chefs and Ben Weatherall of Yorkshire Game will be venturing out onto the stunning Yorkshire heather moors at dawn to bag the first braces of the season. With their heads firmly in the game, they will then race down from the north-east to The Jugged Hare to bring lucky customers a dish that often doesn’t appear on menus until 13th or 14th August at the earliest. Witness the Land Rovers screech to a halt outside The Jugged Hare before sitting down to a delicious British Game & Fine Wine Dinner at 7.30pm. Guests will be able to follow their dinner’s progress throughout the day via @TheJuggedHare #gloriousgrouserace. 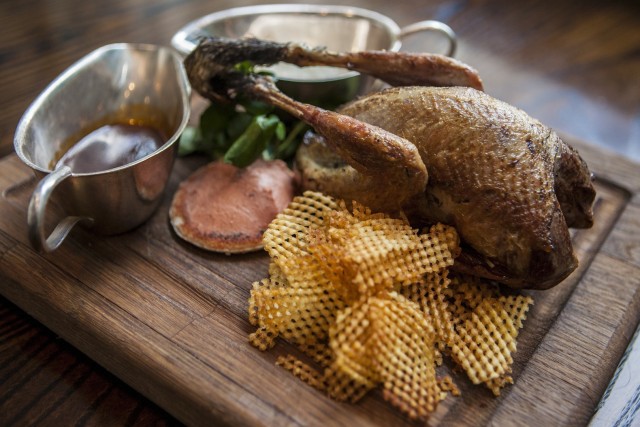 Want to give shooting a go? ETM Group will host a clay pigeon shooting day on Thursday 17th September at a renowned shooting ground followed by a game and wine feast back at The Jugged Hare.

Do your bit to save red squirrels…by eating the pesky grey ones! During National Red Squirrel Week 28th September – 4th October, The Jugged Hare will be transformed into The Jugged Squirrel complete with new signage and a whole host of squirrelly specials to try. Don’t feel too guilty, The Jugged Hare will make charitable donations from all squirrel dishes sold during the week to the RSST (Red Squirrel Survival Trust) to help the cute critters hold their own against the dominant greys.

Still not had your fill of the field sport? November is the start of pheasant season so Monday 16th – Sunday 22nd November will be hailed by ETM Group and The Jugged Hare as the nation’s first National Pheasant Week. Anyone from the most seasoned chef to humblest of home cooks will be invited to share their best pheasant recipes, tips and menus via www.nationalpheasantweek.com to encourage the UK to get behind this underappreciated bird.

Step away from the fried chicken and check out London’s hottest fast food for game season – a Finger Lickin’ Pheasant Bucket. Eight moreish pieces of pheasant fried in the Jugged Hare’s secret recipe coating served with handcut chips and coleslaw. The limited edition dish will be available across all ETM Group sites for National Pheasant Week only, making it one for every game fan’s bucket list.

The Jugged Hare and the Blackface Meat Company have joined forces to create ready-made Pheasant Boxes that can be delivered straight to your door for you to cook in the comfort of your own home. Each box (£39.93 including delivery) will contain: one oven-ready pheasant, one boned and stuffed pheasant with sausage, four skinless pheasant breasts and two pheasant breasts stuffed and wrapped with bacon – all prepped and ready to pop in your oven for the ultimate pheast. Visit www.nationalpheasantweek.com for a special ‘unboxing’ video and to buy online.

Culminating a week of pheastivities will be The Jugged Hare’s ‘Pheastival’ on Saturday 21st November. Expect a cooking and plucking competition with some of the UK’s top game chefs, game stalls and tastings, live music and much more!

Sourcing from Yorkshire Game as well as several other small, select gamekeepers and riflemen up and down the country, ETM Group will again get creative with game this season. Innovative and delicious dishes include: venison shank; roast grouse with bread sauce and game chips; salt-baked grey-legged partridge with skirlie and juniper jus; snipe kiev with pickled cabbage; devilled game giblets on toast and the ‘Jugged Hare bomb’, delicious jugged hare encased in a pastry bomb delivered flaming to your table using a rosemary “fuse”! Look out for delicious bar snacks such as Wild Boar and Black Pudding Lollipops with Guinness HP; Venison Scotch Eggs with Cumberland Sauce; Hunter’s Sandwich and Partridge Sausage Rolls with Sloe Gin Jelly.

More traditional game fare is available in the pub’s grouse feasts for parties of six. Roasted whole and served with game chips, bread sauce and a rich, game gravy this is the perfect way to enjoy the most delicate of game birds.

Learn to pluck, truss, butcher and dress various game birds at a Jugged Hare Game Masterclass. Available upon request from October to February, classes are of 8-16 people and cost £150 for a three-hour class, which includes a three-course game feast, matching wines and a sloe gin cocktail on arrival.

For those who like their food ready dressed and prepped, try one of the Gourmet Game Suppers at The Jugged Hare or sister gastropubs, The Gun, Docklands and The White Swan, Holborn. Five delicious courses are designed to give you a taste of game and each is matched with a specially selected fine wine.

Full calendar of events below: