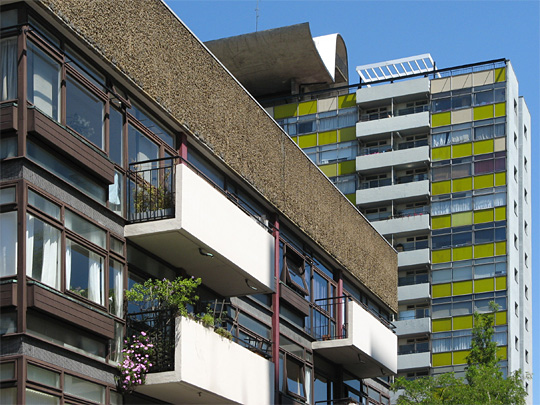 Located immediately to the North of the Barbican Estate, Golden Lane is very much the sister complex to the Barbican, with a shared history and similar conceptual approach. Pre-dating the construction of The Barbican blocks by 10-20 years, this ’50s housing estate was architects Chamberlin, Powell and Bon‘s initial project to renew this area of the City of London which had being nearly obliterated by the bombing of World War II, doing so in a radical modernist style influenced by Le Corbusier. The development of The Barbican as an urban microcosm, a modernist model for social housing and urban living and a triumph of Brutalist architecture can be seen to have its roots in the work done at Golden Lane, which is in many ways a prototype for ideas which were developed further in the subsequent construction of the more ambitious and extensive Barbican.

Initially established as social housing, many of the Golden Lane properties became privately owned following the right to buy policies introduced in the 80s, are the estate is becoming increasingly desirable in the property market over time, with listed status.