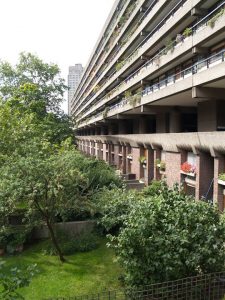 The Barbican is a residential and arts complex built during the 1960s and the 1970s in the City of London, in an area once devastated by World War II bombings and today densely populated by financial institutions. It contains, or is adjacent to, the Barbican Arts Centre (containing concert halls, cinemas, theaters, gallery space, restaurants and even a large jungle-like conservatory), the Barbican Estate (residential housing for around 4000 people), the Museum of London, the Guildhall School of Music and Drama, the Barbican public library, the City of London School for Girls and a YMCA. The complex is also flanked to the North by the earlier Golden Lane Estate which can be seen as a prototype for the Barbican development by the same architectural team. The area is a prominent example of Brutalist architecture, making bold and innovative use of exposed concrete, forming an integrated urban microcosm isolated from the traffic of the city in a network of pedestrian highwalks, gardens and lakes.

Barbican, 1969 – a film from the London Metropolitan Archives

How others see us

Those interested in the Estate may also be fascinated by how the Barbican is depicted as an Utopian place to live in an article first published in the Norwegian Air Shuttle inflight magazine a couple of years ago.  Who are we to disagree!

To read the article in full click on Our Concrete Utopia which also contains some great photography of Barbican features.