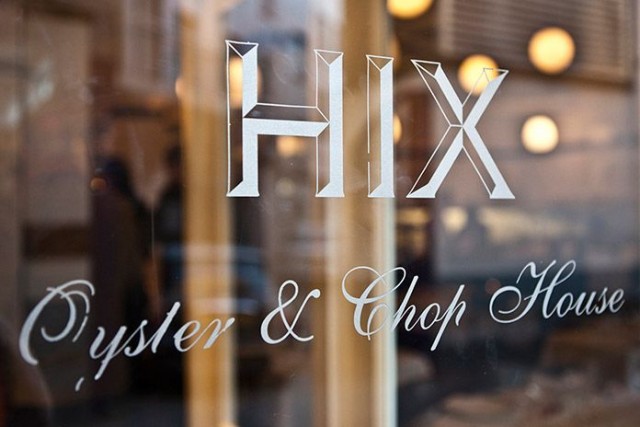 This is one of my favourite restaurants. The atmosphere is warm and comfortable and food uncomplicated, delicious, seasonal with a strong emphasis on British produce. And it is so close to home – it’s going out minus the inconvenience (almost half the walk is undercover through or round the edge of the market). Dark wood flooring and white tiled walls with substantial bar in the front half of Hix are original features from the old Rudland & Stubbs fish restaurant days, the previous occupier of the site. Launched in 2008 Hix Oyster & Chop House was the first of several restaurants that Mark Hix opened following seventeen years with Caprice Holdings (The Ivy and Le Caprice). 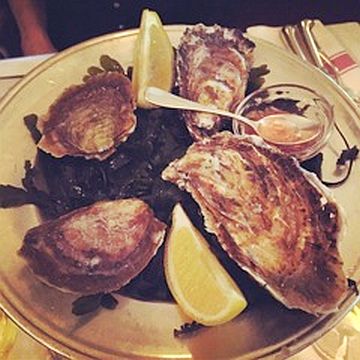 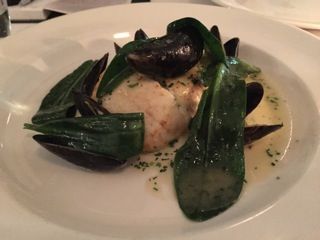 Fillet of Peterhead hake with mussels

Lavinia’s main dish is delicious – steamed fillet of Peterhead hake with mussels and garlic/parsley butter served with a few sea purslane leaves. Saint-Véran Tradition Domaine des Deux Roches Burgundy 2011 (Chardonnay) (£10.25/glass) is a perfect partner. According to Matthew Jukes of Quintessentially Wine “… very few wines have the elegance and classiness of this beauty.”

South Devon Ruby Red fillet steak, on the bone for flavour, (£36) is a pure pleasure – rare and extremely tender. It is served with baked bone marrow (mixed with breadcrumbs, shallots, parsley, mustard) and three little pots of sauce: béarnaise; Tewkesbury mustard; horseradish & Dijon. In the future any lesser steak will simply be a punishment. The engaging Jean Michel, who looks after us so well this evening, recommends Les Obriers de la Pèira, Côteaux de Languedoc, France 2011 – from musician Rob Dougan and winemaker Jeremy Depierre’s small vineyard (£46/bottle). The Rhone Report’s Jeb Dunnuck says “…one of the top estates in the Languedoc, the 2011 Les Obriers is an intriguing blend of 65% Cinsault and 35% Carignan. …notions of red and black fruits, old leather, rose petal, and background herbs. Turning more and more floral and elegant with air, it’s a beautiful wine.” 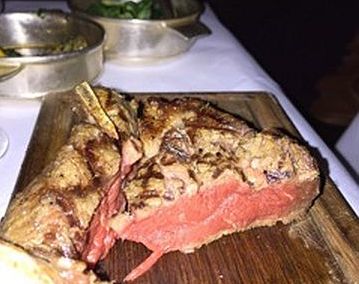 For dessert we share a Bakewell pudding (butter puff pastry, almond cake with blackberry jam, flaked almonds on top, served with almond ice cream (£7.25). The evening has been really lovely and we look forward to returning soon – and don’t forget they are open on Sundays too.

The restaurant is open seven days a week, Sunday to Friday 12 noon to 11.00 pm (9 pm Sundays) and Saturdays 5pm-11pm . Lunch is served from 12 noon and then open all through the day serving dinner until 11pm. The bar is open late Monday to Saturday.