There are five Michelin starred restaurants within easy walking distance of the Barbican and Barbican Life has just had the pleasure of eating at the newest of these, although we think perhaps the least known to Barbican residents.  This is HKK – the offshoot of the hugely highly rated Hakkasan – which has been set up in the ground floor of a fairly nondescript new office block in Worship Street, which runs between City Road and Bishopsgate.  Indeed the restaurant is seemingly confident enough in its destination status to have no sign or menu outside to signify it is indeed one of England’s top Chinese restaurants and one of the relatively few offering Asian cuisine to have achieved Michelin starred status.

HKK does have impeccable roots in terms of gourmet Chinese food – no special fried rice or chop suey here.  Hakkasan, from which it sprang is credited with having transformed the perception of Chinese cuisine in London and has held a Michelin star since 2003.  Its executive chef, Tong Chee Hwee – nowadays the top chef in the Hakkasan empire (which now has offshoots in India, the Middle East, China and the USA as well as its founding London restaurant) –  is in personal charge of HKK and, reportedly, set it up as a showcase for all that is best in Chinese Cantonese cooking – primarily presented in terms of tasting menus.  Its appeal to the Michelin judges may also be that perhaps the fare can be likened to the best of French nouvelle cuisine – smallish dishes impeccably presented and offering sensational tastes.

On entering, the modern bar is right ahead of you – it is possible to reserve seating to dine at the bar – with a private dining room behind.  The main restaurant is to the right and is quite a large and airy area but only seats around 48.  Decor is minimalist and perhaps a little dark, with a view through to the open kitchen. 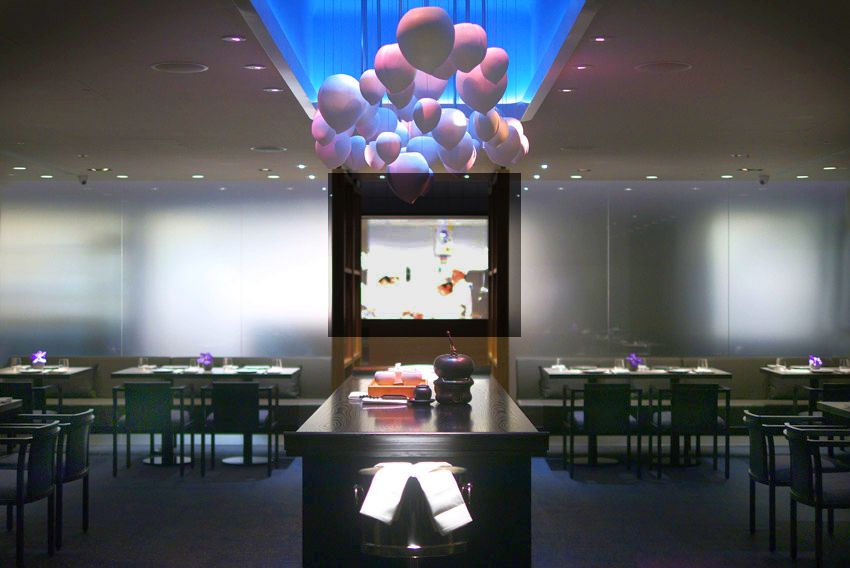 To compare the food at HKK with that of any standard Chinese restaurant I’ve eaten at would be a bit like comparing what’s served at a top restaurant with a downmarket greasy spoon.  In the 10 course tasting menu we sampled there was little, if anything, apart perhaps from very succulent Peking duck carved at a serving counter in the centre of the main restaurant area, which might be considered amongst the fare one might find at even a reasonably upmarket Chinese restaurant elsewhere – indeed not a grain of rice passed our lips throughout the whole eating experience – and experience it certainly is!

One of the things which is particularly good on both the service and food preparation side is that one is asked at the beginning about any dislikes, food allergies etc. and your individual tasting menu would be adjusted accordingly.  The restaurant also offers regular and vegetarian versions of its tasting menus.

We had the 10 course tasting menu which seemed adequate – we have read one or two comments that the 15 course standard dinner menu is just too much food, although the individual courses are small, but not tiny!  And, I have to say, every single course I had was a delight – both in presentation and taste – maybe I should have had the 15-course option.  I’m sure I could have found room!  We were served matching wines chosen by the sommelier.   In effect we were presented with a different wine with every two dishes.  Each course was described in detail to us by our attentive waiter as it was served, as was each glass of wine by the sommelier (service was impeccable). 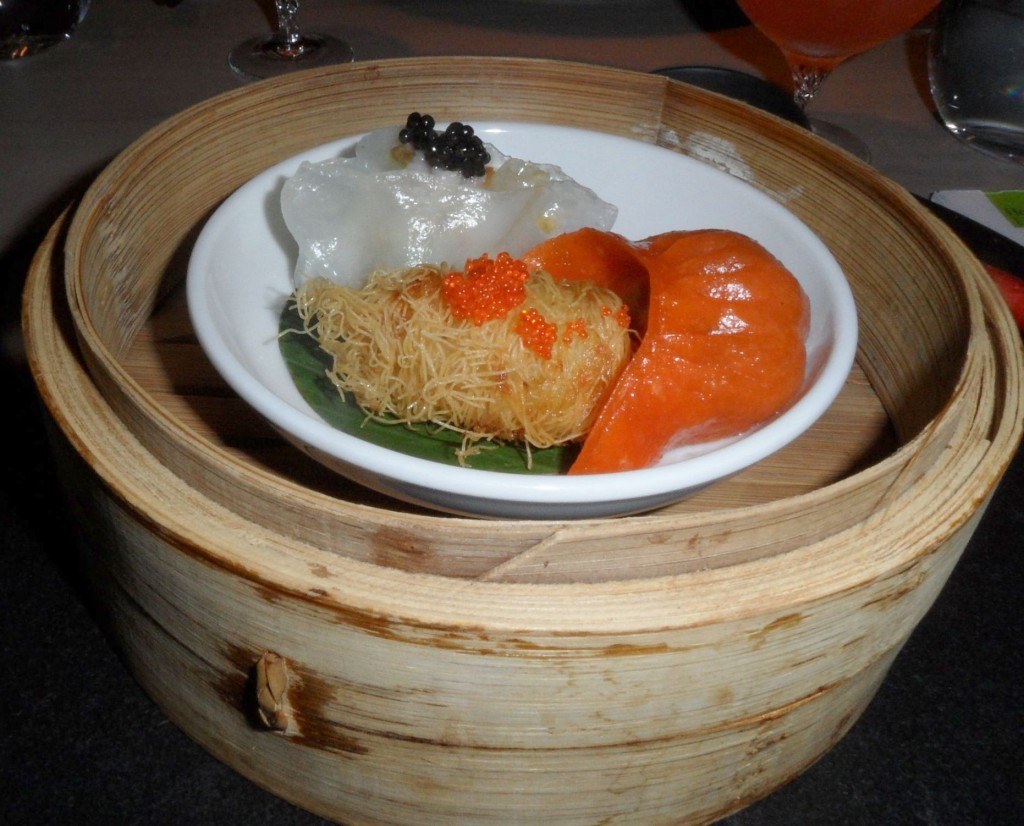 We started with the crispy taro puff with Canadian scallop, followed by a great dim sum trilogy. Then came the cherry wood roasted Peking Duck followed with truffled seafood soup served with Osmanthus flower (whatever that might be – but the overall taste combination was great).  Then came wok fried lobster (in fact a meaty lobster claw which did take a little digging out, with garlic sesame sauce.  Then chargrilled Chilean seabass, followed by a vegetarian dish – sugar snap peas, lotus root and water chestnut in XO sauce – all freshly prepared.  The final savoury dish was seared Rhug Farm organic lamb.  Every single one of these was terrific.  My favourite – if I had to choose – would probably be the dim sum trilogy – or perhaps the sea bass, or the lobster or maybe …..  I’m not always a lover of Chinese food but this was all exceptionally good to my taste. 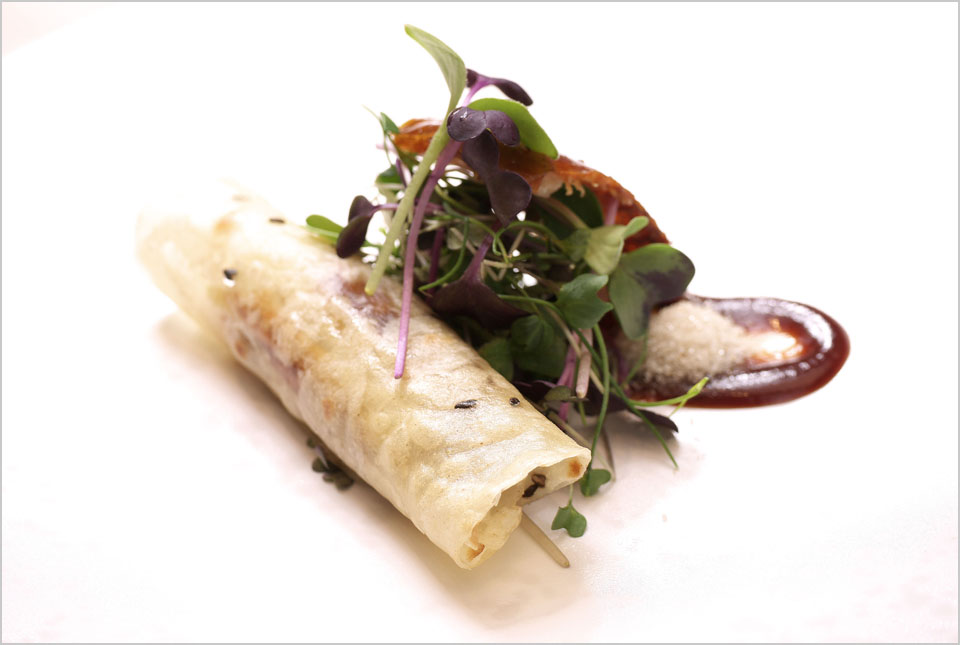 The wines we were served were a Louis Roederer champagne, a pinot noir from Germany (unusual and very pleasant), a premier cru Chablis, an Australian cab sav/merlot blend and then a sparkling Muscat d’Asti with the desserts.

Sometimes at Barbican Life we are accused of being perhaps too enthusiastic in the reporting of some of the restaurants we have been reviewing – but one has to accept that nowadays new restaurants, if they are to survive, have to offer good food and service and with plenty of competition in the area on which we focus one has to say that most of the restaurants we cover do indeed meet these criteria.  But, lest we are considered too full of praise for HKK one might consider some of the accolades heaped on it from mainstream restaurant critics – and some of the awards it has garnered, let alone the Michelin star, should put our praise for it in context.

For example, Giles Coren,writing in a Saturday edition of The Times, commented thus:  ‘I hate tasting menus. But not here. Each dish in turn became the greatest Chinese mouthful of my life’.  While this may indeed also be true for this reviewer too I can’t claim to have eaten as much high class Chinese food as the illustrious Mr Coren, so perhaps such a comment coming from me would be somewhat spurious!

Zoe Williams (no relation – it is after all the third most common surname in the UK) writing in The Daily Telegraph said it was ‘tasting-tastic’.  Richard Vines, Bloomberg’s chief restaurant critic, reckons it to be one of the best Chinese restaurants in London and interestingly describes the lunch menu options thus: “I can’t immediately think of a lunch in the City that offers such quality ingredients and cooking for so little.”

But we feel this is very much a restaurant for the special occasion – at least at dinner time – and Michelin starred 10 or 15 course tasting menus don’t come cheap at £75 for the former and £98 for the latter – and that’s without the wine or cocktails.  The wine flight we had cost £40, but wine is available by the glass or bottle instead and there are some just about reasonably priced ones available – right up to £4,074 a bottle for a 1982 Chateau Latour Premier Cru Classé.  At lunchtimes though, as Richard Vines was commenting,  HKK does offer well priced smaller menus – a four course regular or fish menu for example at £28.50.  It’s probably worth looking on the restaurant’s website for the latest menus (they are updated seasonally) and prices.

A nice touch at the end is that each diner is presented with a printed and signed (or chopped to use the correct term for a Chinese signature seal) copy of the menu from the chef.  Invaluable for a reviewer trying to make sure he gets all the names of the various dishes correct!