Hutong – A northern Chinese treat in the Shard

Hutong – A northern Chinese treat in the Shard

One has to say that one has been spoiled in terms of restaurants being reviewed recently.  Maybe not Michelin starred dishes – which may often be too fancy and pretentious in every respect anyway – but in terms of restaurants with good food and fantastic views, albeit very much the same views, the only difference being separated by two floors of the Shard.

Now Chinese food has not always necessarily my favourite cuisine, but that opinion has up until now been based on the kind of fare served up in most Chinese restaurants in the UK.  Its OK, but I wouldn’t go out of my way to partake.  However Hutong in the Shard is something of a revelation – primarily serving food based on northern Chinese cuisine which differs very much from the usual Cantonese dishes which seem to be the norm in this country.  But then perhaps a really high quality Cantonese style restaurant would also prove to be something of an eye-opener for the writer.  The Hutong menu is largely based on Sichuan cooking, renowned for being much more spicy and the reality, combined with the superb views from the 33rd floor of the Shard, certainly made for a great eating experience.

Hutong is managed by the same group as Aqua Shard, along with some other restaurants in London.  But the restaurateurs have Chinese roots with their flagship, also called Hutong and the restaurant on which the London version is based, in Hong Kong. The restaurant itself, with floor to ceiling windows all around, is attractive with dark wooden tables set with red Chinese paper lanterns, removed when you take your seat and large cushionless chairs, perhaps awkward to manoeuvre into place.  There are a number of screened off smaller areas for groups, also offering the great views and an attractive bar area. 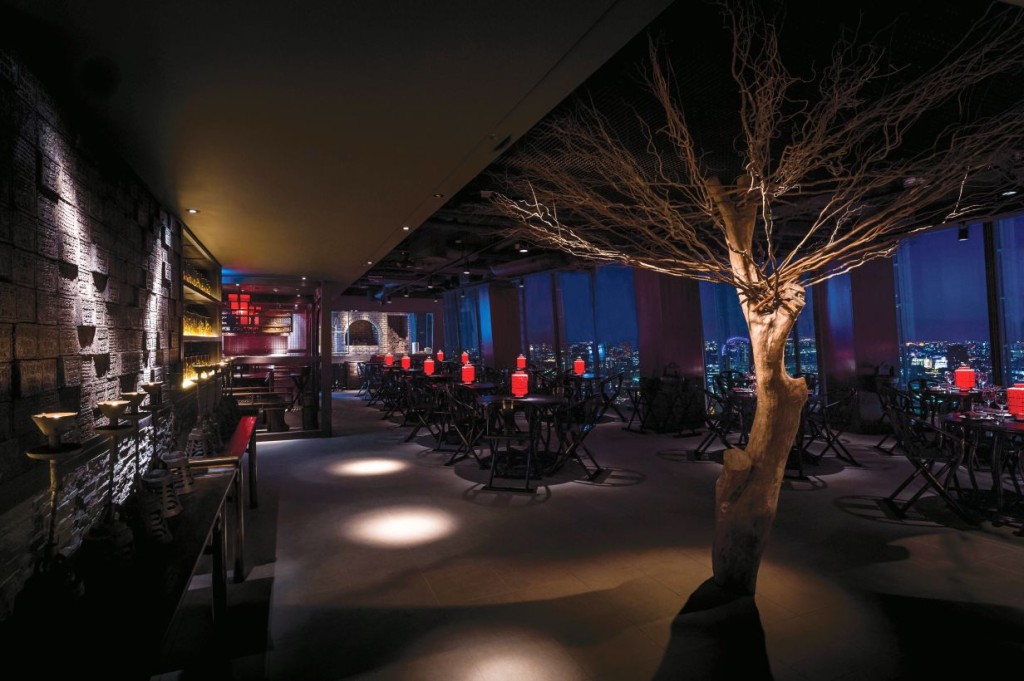 The Hutong menu appears dauntingly large with lots of choices for starters and fish and meat main courses and is perhaps ideally suited for large parties all sharing.  Not really knowing where to start for just two people we chose the set Signature menu (£55 a head for a minimum of two people) – effectively an eight course tasting menu.  Perhaps a bit of a cop out, but then this is effectively the restaurant’s own choice so should give a good cross section of the kind of food served.  In this we were not disappointed.

No eating utensils are provided, apart from chopsticks and one wouldn’t dream of losing face and asking for a fork, but eating two of the starters with just chopsticks in terms of very slippery chilled thinly sliced scallops and almost equally slippery chilled spiced razor clams was indeed something of a challenge for someone brought up with knives, forks and spoons.  But we managed!  A third starter – Hutong’s crispy vegetable spring rolls was less of a problem.

Having seen off the starters, all excellent, the real pièce de resistance arrived in terms of a large round ornamental bowl – the restaurant calls the dish Red Lantern – filled with crispy fried softshell crab on a bed of Sichuan dried chilli peppers.  We asked the waiter if the peppers were edible – he said yes – but wouldn’t advise us trying.  We didn’t, but when we tweeted this on the barbicanlife twitter feed a young lady responded that her boyfriend did and almost cried!  Apparently a wise choice on our part.  They apparently are mega hot!  However the peppers served to infuse the crispy coated softshell crab with about the correct degree of heat and the overall effect was both visually and gastronomically extremely pleasing. 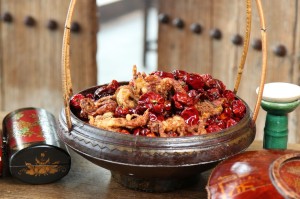 Along with the softshell crab we were served with the other seafood dish – fried prawns with jasmine tea – the tea leaves being cooked a bit like crispy seaweed, a standard Chinese speciality.  Again beautifully presented and very tasty.  There was actually some confusion with the waiting staff as to whether the tea was jasmine or possibly oolong, but either way this unusual combination worked well.

This was followed with crispy de-boned lamb – served perhaps similarly to Peking Duck – with pancakes, a sweet-sour sauce and thin slivers of spring onion.  Very pleasant but somehow the lamb seemed to lack taste, but perhaps that was just because of the spicy dishes which it followed – but  we might have preferred crispy duck instead which we could see being prepared in the duck oven at the end of the restaurant.

Alongside this there was spicy minced pork fried with thinly sliced green beans and chilli.  One couldn’t complain about lack of taste here – my companion described this as the best dish of all.

Then came dessert – mango cheesecake with sesame dumplings and passion fruit sauce.  The dumplings were coated with peanuts (not flagged in the menu and definitely not for those with a peanut allergy) and were melt in the mouth along with the delicious cheesecake and a pleasant sauce.

We followed this seeming marathon with coffee (no decaf available) and jasmine tea.  All in all a very pleasant eating experience.  Service was truly excellent.  The price compares with that of tasting menus in many other good restaurants – and the views incomparable (except I suppose from those from the Shard’s other two current restaurants.

We washed the meal down with wine by the glass – a reasonable selection.  We had a New Zealand sauvignon and I had to venture to taste a Chinese red wine which was smooth and very good at a reasonable price.

Like its sister restaurant, Aqua Shard, two floors below, Hutong is a great special occasion destination with its breathtaking views over the City, an attractive décor, good ambience and great northern Chinese food served with style.