The area within easy walking distance of the Barbican is blessed with a huge range of restaurants – from the sublime to the mediocre. And City Social in Tower 42 certainly ranks in the former category. It was virtually impossible to find fault with our dining experience there – perhaps the only quibble being the signposting to the restaurant entrance at street level! But maybe we were just being dense.

For those not aware, Tower 42 was the first true City of London skyscraper when it was built back in the 1970s as the National Westminster Tower and it started out as the tallest building in London – then virtually entirely as banking offices with first occupancy in 1980 (and was formally opened by the Queen in June 1981).

The City Social restaurant is on the 24th floor offering great heart of the City views as it wraps around three sides of the tower block with the private dining and kitchen areas taking up the other side. Even the loos have spectacular views! The current restaurant was opened in May 2014 by chef/restaurateur Jason Atherton’s company and followed on from Gary Rhodes’ Rhodes 24. City Social quickly became one of the City’s destination restaurants and the overall quality was recognised by the award of a Michelin Star within the restaurant’s first year of operation. No mean accolade! 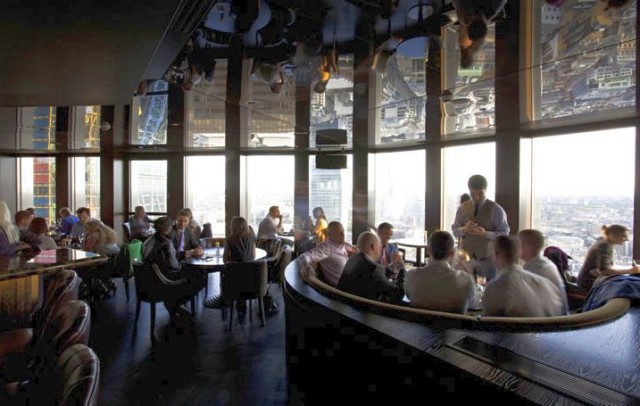 I have to say the restaurant is impressive in all respects. The immediate views on entering are spectacular and the restaurant decor itself suggests class. The quality and presentation of the dishes is immaculate and the service exemplary. It belies the theory that food suffers when there are great views. It was already pretty full when we arrived just after 7.30 pm and those tables which were unoccupied on our arrival were also soon taken. It seats around 100 – but even so it’s definitely advisable to book ahead.

We were seated at a small, but adequately sized table against the windows looking directly across to the Heron Tower as dusk drew in with the cityscape gradually lighting up around us.  My colleague was even provided with a stool specially for her handbag.  Well she was impressed! 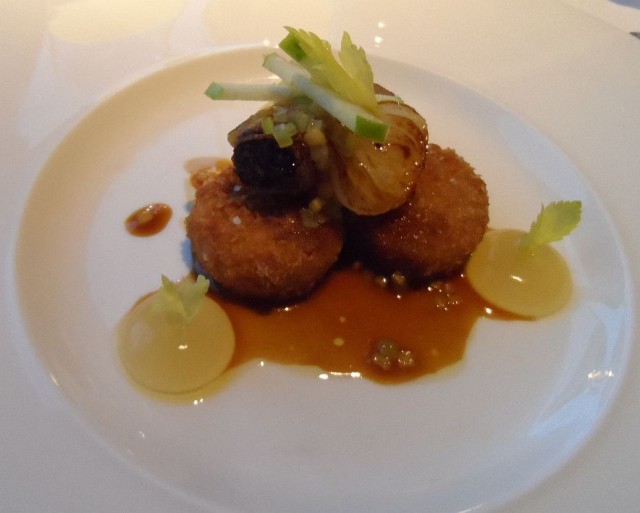 But restaurant eating, however good the views, or special service for one’s handbag, is primarily about food and service and City Social excels on all counts. – although at a price.

The starters make for great reading on their own and we tried the pigs trotter and ham hock with black pudding, apple and Madeira (£13) and asparagus (just in season) with smoked egg yolk, parmesan biscuit and hazelnut vinaigrette (£14) – both delicious and unusual combinations which I’m not aware of seeing anywhere else – but then I haven’t eaten at any other Jason Atherton set-up restaurants. Other starters (hot or cold) come in at around the same price range. 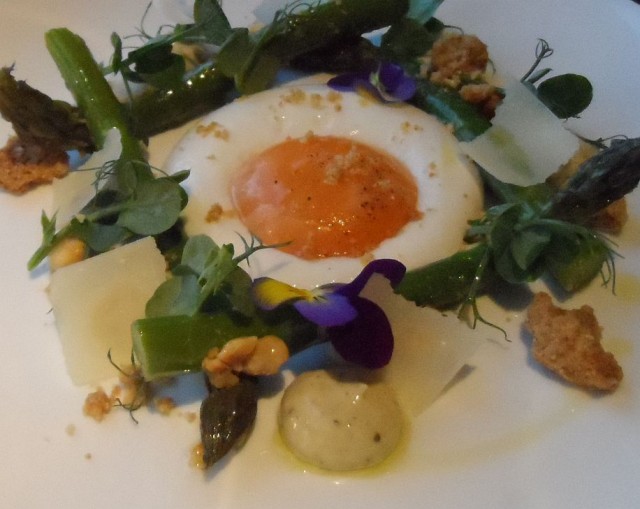 The City Social Menu is not huge but everything on it looked absolutely mouthwatering from its description – at least for my taste. And in the event neither of us were in any way disappointed. I chose sea bass with a deep fried oyster, cucumber, cauliflower and oyster velouté (£32) beautifully prepared and the combination of flavours worked well. 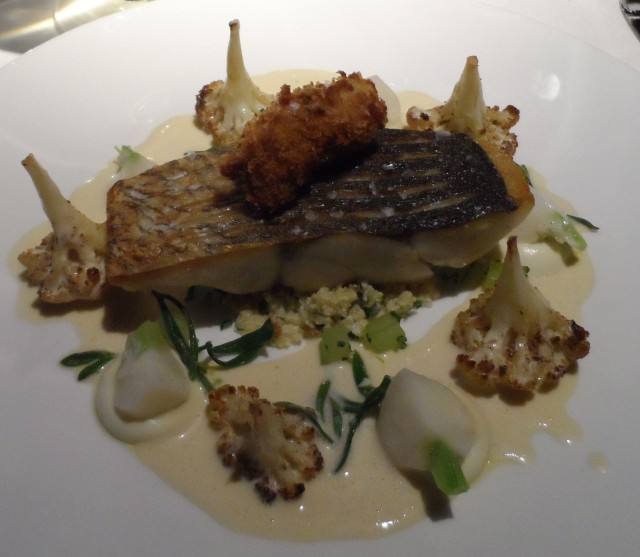 My colleague went for whole dover sole with caper gnocchi, samphire and citrus sabayon (£38), but not wishing to tackle a whole fish, bones and all asked for it to be served filleted which, as any good restaurant will, was happily done. Again, so I was told, the dish was a delight.

And so to dessert. My colleague, who works closely with the restaurant industry and thus has much experience in eating out in London informed me that any Jason Atherton inspired restaurant has a reputation for brilliant desserts so, although I seldom eat them at home was looking forward to a treat – and treat it was. I ordered a rhubarb and custard soufflé, crumble and vanilla ice cream (£8.50). The soufflé was so light one was almost afraid my plate would float away! The flavour was delicate – the whole dish could hardly be bettered. 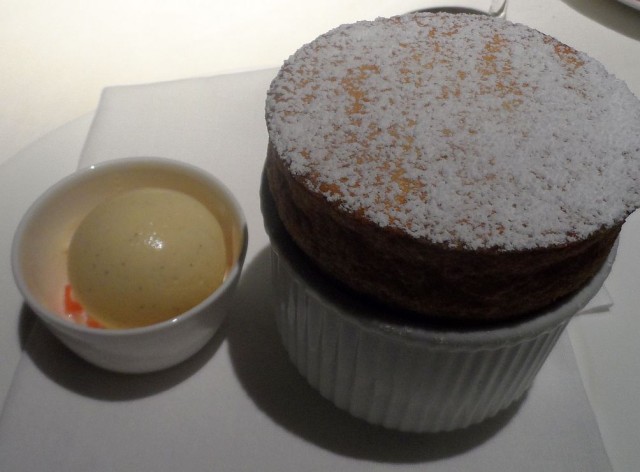 My colleague chose the blood orange parfait, candied beetroot, green apple sorbet and beetroot syrup (£8.50) with which she was most pleased. Personally I’m not keen on beetroot so would probably have avoided that particular dish, but I was offered a taste and found it great. 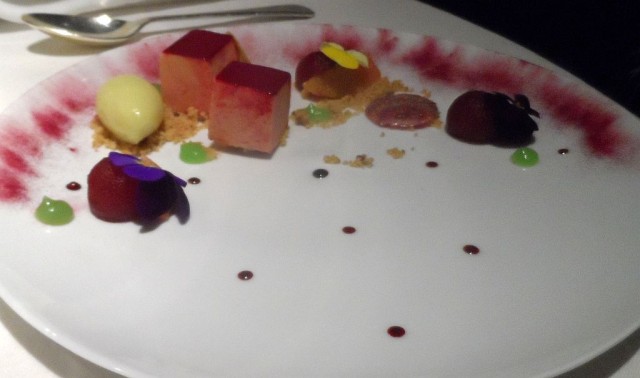 All in all a great meal, although if one tots up the various course costs it worked out at around £60 a head without wine or bottled water or service. It would be difficult to come out much below that but one pays for what you get and at City Social the food was truly delicious and beautifully presented and the whole experience was absolutely first rate.

We had wine by the glass to wash down the food excellently suggested by the sommelier – and here one can put the costs up substantially if one is out to flaunt one’s wealth with a bottle of 1999 Petrus costing £2,990! For the less well heeled wines by the bottle start at £24 for the whites and £29 for the reds and by the glass from £7. Michelin describes the wine list as very interesting and there do appear to be some great wines included, but at a price.

The executive chef at City Social is Paul Walsh who has a great cv, starting out at The Savoy and then at the Savoy Grill under Marcus Wareing helping it achieve its first Michelin Star. He then worked at Restaurant Gordon Ramsay – seen by many as London’s top restaurant – for 5 years ending as Sous chef. He teamed up with Jason Atherton to take on the head chef position at City Social and his touch shows.

City Social also has a great and large bar/eating area seating 85 with the same spectacular views. It serves the bar snacks menu, although much of what is on it could hardly be termed as a snack with a small number of dishes as on the main restaurant menu and at the same prices. It is renowned for its cocktails from mixologist Gareth Evans apparently inspired by the American prohibition era.
I have to say that City social provides a dining experience par excellence, perhaps only matched in this respect in the area by Angler – the similarly Michelin starred restaurant atop the South Place Hotel between Moorgate and Liverpool street stations – but City Social tops it on views. Definitely a great destination restaurant for a special occasion.