Janet Wells’ takes us online for her quarterly review of the Arts, Gallery and Museum scene.

At last – along with Spring – everything is beginning to open up and what could be more fitting than the David Hockney exhibition at the RA.  I think we have all been aware of the explosion – for that’s how it appeared to me – of blossom in the City this April.

Hockney tells the story of how he noticed Spring again after spending a long period of time in LA – which is not known for seasonal changes.  Back in 2002 he was walking through Holland Park; and that day, after 20 years, he says that he noticed, once more, Spring happen! 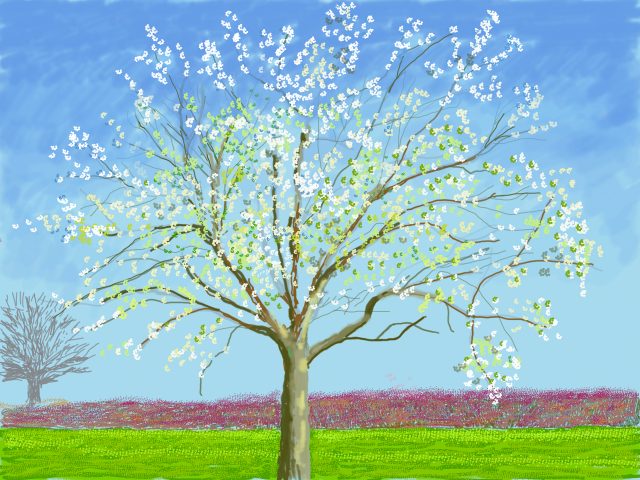 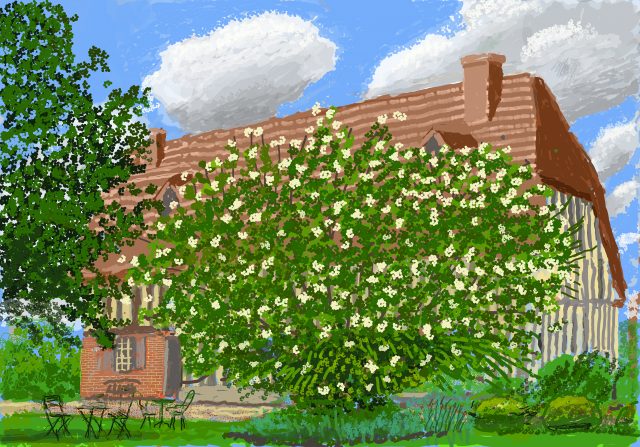 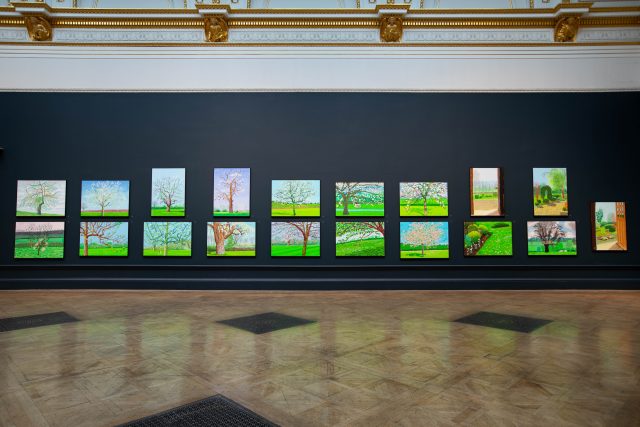 Bridlington: He went for five weeks, stayed five years and witnessed five consecutive Springs:   The result was the 2012  RA exhibition,  A Bigger Picture.

He had moved onto a new medium and was experimenting with technology: painting directly on to an iphone, using the Brushes app: It was obvious that he should move on to the ipad with its larger screen: This radical and challenging change of medium meant that he had to spend many hours practicing and perfecting the technique and then on to experiment with printing the images directly from the ipad.

France:    The story is that in 2019 Hockney, with his manager and his partner JP, made a trip to Normandy, ostensibly to see the Bayeux Tapestry: He tells how he was struck by the “fairy tale” Normandy houses. They viewed a “Seven Dwarfs” house (which stands in the middle of a field in Beuvron – en -Auge not far from Caen) and bought it.     There was blossom everywhere and Hockney (prolific as ever) produced 116 paintings recording the 2020 Spring in Lockdown.  Fired up with the brilliance of it all, he is continuing and will have a record of Normandy 2021.

*If you miss a booking to the exhibition; there are two publications available through the Royal Academy: The Arrival of Spring Normandy by David Hockney, text by William Boyd and A Yorkshire Sketchbook by David Hockney.

With booking spaces in mind, it might be worthwhile looking ahead:

Tate Modern: The Ey Exhibition: The Making of Rodin until 31 Oct 2021

We alerted everyone about the likelihood of this major exhibition in the Spring edition of Barbican Life – when the opening date was still uncertain:  However, at long last, it is open and I trotted along there yesterday for a viewing.

What was considered outrageous, when Jean Dubuffet first exhibited his work in the 40’s and 50’s, isn’t at all shocking now: His crude brushwork and naïve drawing style and his rejection of academic art was seen by critics then as anti- cultural.  He had himself rejected conventional art training when he was in his teens but after a longish spell selling wine, he decided to return to making art in the 1930’s .  His idealist approach to aesthetics embraced, what is called, “low art” which shunned traditional standards of beauty in favor of what he believed to be an authentic and humanist approach to image making:  Notably the drawings of the untrained:  the artwork made by children and particularly the institutionalized. The movement art brut 1945 – 1951 was initially formed by him. 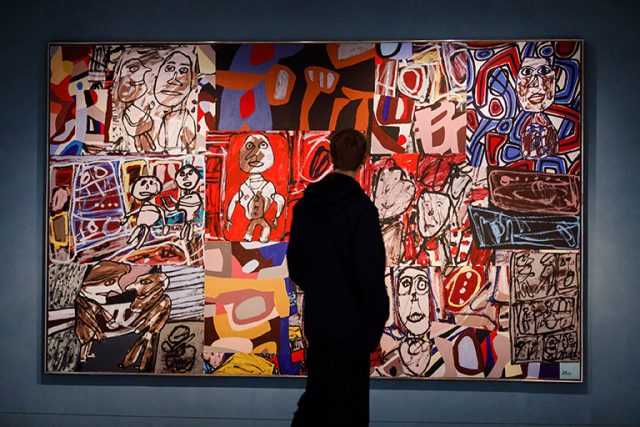 However, today – as anyone can see wandering around this exhibition that his influences have lasted:  It is particularly apparent in the work of  Keith Haring and Jean – Michel Basquiat,  as it is in much of contemporary street art, within current animated film, sculptors and painters: His experimenting with raw materials  (easily available in a traumatized Paris in the 40’s and 50’s ) such as  mud, sand, asphalt, coal, pebbles and dust and  his concoctions of pastes –  is generally accepted now. He incorporated butterfly wings into pieces long before Damian Hurst was shocking us in the 90’s.  Over his active years he was prolific, tirelessly experimental and constantly developing techniques.  However, don’t be taken in with the seeming naivety, Jean Dubuffet was a professional who worked in an orderly fashion and was constantly reinventing himself.

I came across a couple of quotations: “the more banal a thing may be, the better it suits me” 1945;  “ Luckily, I do not consider myself exceptional in any way.  In my paintings I wish to recover the vision of an average and ordinary man”.

Accompanying the exhibition, there is a program of talks, tours, courses and events online or at the Barbican Art Gallery from March to August 2021.  These are in line with government guidelines, event details may be subject to change – so please check the website for the latest information: www.barbican.org.uk/artgallery.

This exhibition – comprising of over 200 photographs, an audio-visual installation, a film and a series of drawings – is dedicated to the work and activism of Brazilian artist Claudia Andujar, who devoted her life to photographing and defending the Yanomami, one of Brazil’s largest indigenous peoples.  At a time when their territory is threatened more than ever by illegal gold mining and as Covid 19 continues to sweep the globe, this exhibition is especially relevant in the context of the humanitarian and environmental crises  exacerbated by the pandemic.   It also sets out to reflect the dual nature of Andujar’s career, committed to both art and activism.

When you feel ready to venture further than  shouting distance, the Serpentine Gallery in Kensington Gardens will be re-opening on the 19th May; with the 2020  temporary Summer Pavilion designed by Johannesburg –  based practice, Counterspace:  This year the commission has been extended for an extra year. 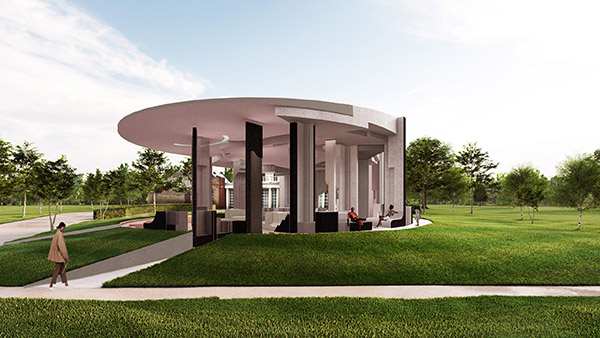 Jennifer Packer: The Eye is not Satisfied with Seeing 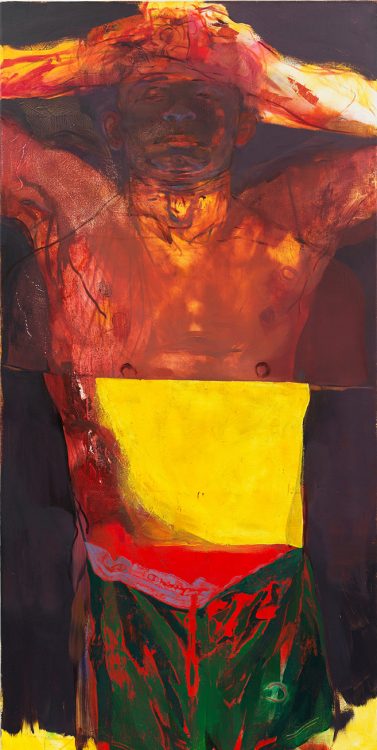 This is the first major exhibition  of British – Ghanaian photographer, James Barnow (b 1929) whose career as a studio portraitist, photojournalist and Black lifestyle photographer spans six decades and records major social and political changes in London and Accra

Timed Tickets are required to enter the galleries.