It is always my plan to arrive at any popular exhibition when the doors open for the day, however the entrances for the Cezanne are timed and there’s plenty of viewing space whatever time of day.

As we progress through the galleries, we eventually come to rooms predominantly (and wonderfully) full of apples or shimmering landscapes; how clearly we can see how he came to plan and paint one subject using a singular method. I was struck by the freshness of the colour and how thinly some of the oil paint was applied – using it more as if it were watercolour.

However, his early work came as a surprise: Cezanne has never been thought of as a political radical, but he was living in turbulent times and on arriving in Paris from Aix-en-Provence he fell in with his friends Zola (a committed anarchist and his mentor) and Camille Pissarro (a believer in an egalitarian society).  These early paintings are disturbingly dark, violent and rather strange.

This stage appears to be interrupted by the appearance of Marie-Hortense Fiquet, with whom he lived (secretly from his father) for many years before marrying. He continued to paint her portrait over the following 25 years. They eventually married in 1886. His family portraits, including several of their only son Paul are in room 4.  It is obvious how Picasso had been influenced by these paintings.

Most of us have only had the opportunity to view the odd Cezanne from within a gallery collection (for example, we are so lucky to have those hanging in the Courtauld). This is the first opportunity in over 25 years to see the breadth of Cezanne’s career.  The EY Exhibition: Cezanne brings together over 80 selected works from collections in Europe, Asia, North and South America. Here we can view key examples of his iconic still life paintings:  The Provençale landscapes, portraits and bather scenes but also a number that have never been seen in the UK before such as The Basket of Apples c1893 (the Art Institute of Chicago),  Mont Sainte-Victorie 1902 -06 (Philadelphia Museum of Art) and Still Life with Milk Pot, Melon and Sugar Bowl 1900 -06. (Private collection). 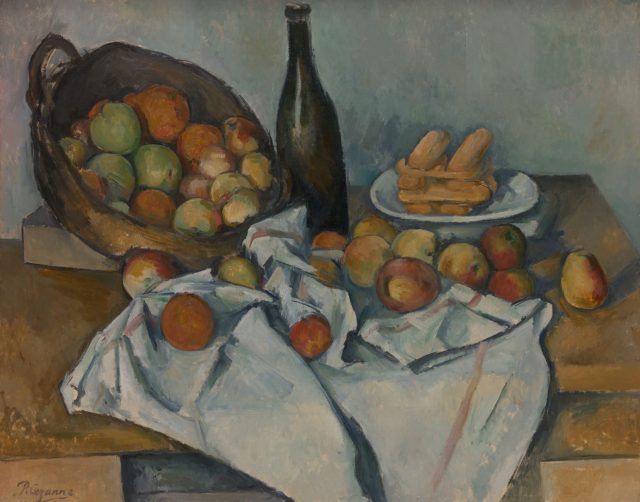 The Basket of Apples c1893 (the Art Institute of Chicago)

There has been new research into the colours, compositions and techniques that were used in these works that reveals how the artist bold approach challenged the conventions in ways that continue to influence painters working now.

An Islamic geometric pattern in teal and white covers the whole floor of the Curve Gallery.  On the wall, it subtly changes – huge individual geometric flower heads continue along to the end of the gallery space.  The first effect as you step in is that of slight dizziness. In the centre of each flower is a tiny, framed portrait of a woman – these paintings, in tempura on vellum are in the tradition of Persian miniature paintings (basically, monochrome with focused bursts of intense colour), hair fully visible, dress style decidedly western, of the 70’s. 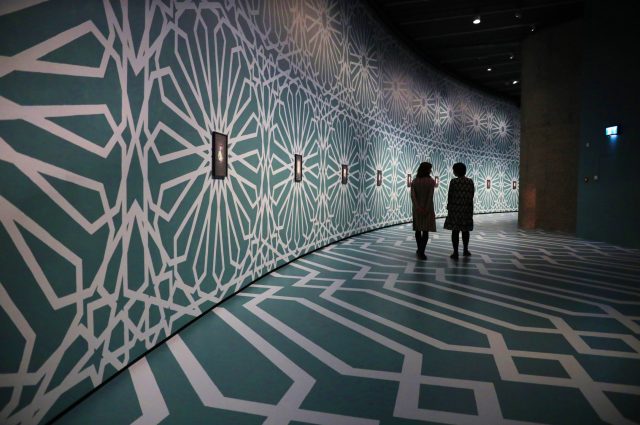 We are drawn towards the music coming from beyond the bend of the gallery.  A suspended giant crystal ball is at the far end, its mirrored shards flash – a singer and undulating orchestral violins come from a monitor within, onto which is projected the performer.   There is a wide circle of large scarlet velvet cushions inviting us to lounge and drift off into some dream of our own.

How timely this exhibition is – coming so closely after the recent horrific death of the 22-year-old Mahsa Amini, who was arrested by the morality police of Iran’s government for not wearing the hijab in accordance with government standards.

In 1979, a women’s march – intended to celebrate International Women’s Day – took place in Tehran. However, this transformed into a massive protest around the changes that were taking place in women’s rights during the Iranian revolution – specifically regarding the hijab.  The protest lasted for 6 days with thousands of women participating.

The exhibition title Rebel Rebel is borrowed from David Bowie’s 1974 cult pop song and pays tribute to the courage of the 27 female icons, who, back then, pursued their careers in a culture enamoured with western style but not its freedoms. Among these women was Roohangiz Saminejad (the first unveiled actress to appear in a Persian language film), Forough Farrokhzad (a controversial modernist poet), the leading intellectual and writer Simin Daneshvar and the filmmaker Kobra Saeedi (who was jailed for years and placed in a mental institution before she was released into poverty).

There are a hundred works by the Lithuanian artist and celebrated composer Mikalojus Konstantinas Ciurlionis (1875 -1911). Between Worlds reveals how Ciurlionis used structure and colour to create works that travel between mythology and reality.

Picture Perfect Christmas: “Winter Scene with Skaters Near a Castle” by Hendrick Avercamp. 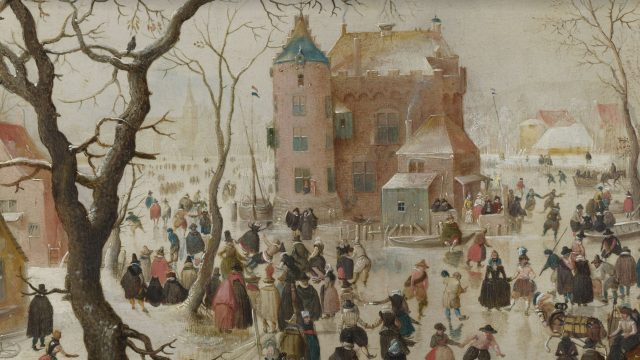 “Winter Scene with Skaters Near a Castle” by Hendrick Avercamp, National Gallery

Adapted for the stage, this is a 60 min musical show taking place in the National Gallery theatre and is set inside the imagined world of one of the Gallery’s paintings.

Winslow Homer:   The American realist artist is on until the 8thJan 2023

Turner on Tour: Two ground-breaking pictures by JMW Turner (1775 -1851) will return to the UK, for the first time in 100 years.  Harbour of Dieppe: Changement de Coucile and Cologne, The Arrival of a Packet Boat: Evening had been acquired by the American industrialist Henry Clay Frink in 1914 and have remained in the US ever since. Free

This is a large scale group exhibition exploring how contemporary artists have used clay in unexpected ways.  It features 23 international artists working across recent decades.  The exhibition examines the plasticity and the possibility of ceramics.