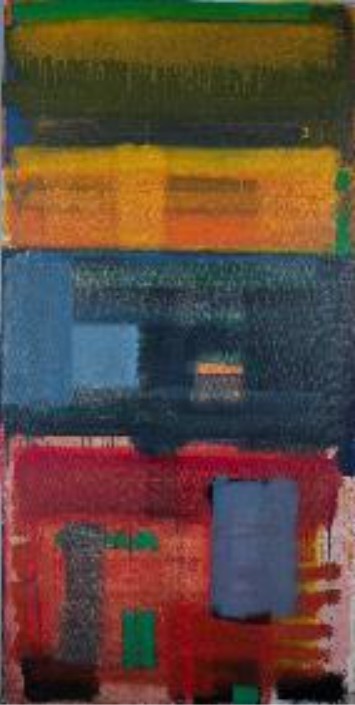 The artists whose work is represented here were mostly born in the 1920’s and early 30’s.  From 1945 the country was trying to pull itself together; there was a new Government with a programme of social reform and out of this came a general sense of optimism.  However, the Cold War was still an overhanging cloud.

This major exhibition brings together around 200 works of paintings, sculpture and photography by 48 artists, drawn from public and private collections both international and in the UK.  Much of the work is little known, never having been included in an overview such as this, while other works are exhibited for the first time.  Postwar Modern focuses on the ‘new’ in this period: work created by artists who were shaped by their direct experiences of the war, its global impact and the aftershocks, at a formative stage of their development.

There are names here that are very familiar to all of us: The exhibition includes Francis Bacon; Lucian Freud; Eduardo Paolozzi and David Hockney. These are shown alongside artists who came to Britain fleeing Nazism, such as Frank Auerbach, Franciszka Themerson and Gustav Metzger.  There are those that migrated from Britain’s crumbling empire -such as Francis Newton Souza, Frank Bowling and Avinash Chandra. 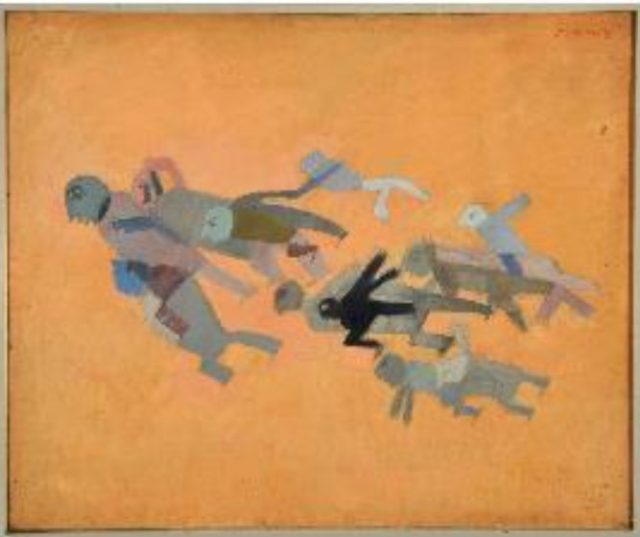 However, I am particularly interested to see the work of the little-known women artists that are going to be represented here:    To pick a few:   Jean Esme Cooke RA: 1927 – 2008 was an English painter of still life, landscapes, portraits and figures: She had trained at Central School, Camberwell, Goldsmiths and the Royal College of Art. There had been a longish, traumatic, marriage to the painter, John Bratby, and before they divorced, she had signed her work using the Bratby name.     Gillian Ayres: (1930 – 2018) was an Abstract painter and print maker – her work is full of vibrant colour.   Eva Frankfurther, (1930 – 1959) was a German born, British artist, who went to St Martins School of Art and was known for her depictions of the immigrant communities of the East End of London. Other women artists, that have been marginalized in previous histories of this period  will be in this exhibition:  Kim Lin (1936 -1997) print maker and sculptor; Sylvia Sleigh, (1916 – 2010); Welsh-born realist painter, and Hungarian born Magda Cordell (1921 – 2008) who was the founding member of the Independent Group (1952 – 1956), a cross – cultural discussion group which rejected the traditional dichotomies of high and low culture.

Postwar London, with its emerging arts scene and pockets of progressive attitudes, was an obvious destination for many artists featured in Postwar Modern – a magnet for ambitious artists from across Britain as well as those arriving from Europe and from current or former colonies. It was during this period that the Barbican Estate was first conceived, to occupy what was an enormous bombsite in the heart of London. Postwar Modern opens as the Barbican Centre, celebrates its 40th anniversary, a reminder of the Brutalist spirit that was central to this moment.

It has been a while: It is almost done and most of the new exhibition spaces are open to those of us that have missed this stunning collection of art works – which ranges from the Middle Ages to the 20th Century.  We missed the popular Monet’s “A Bar at the Folies Bergère”, Paul Cezanne’s “The Card Players” or his landscape, “The Sisters’ Pond, Orsny”.  The impressionists and post-impressionists are now hanging in the beautifully lit Great Room ( London’s oldest exhibition space) on the top floor. If you turn right, out of the lift or top of the stairs, there is a smaller room dedicated to the Bloomsbury Group – mostly Vanessa Bell and Duncan Grant, a very decent self-portrait by Roger Fry as well as some furniture design and textiles. Something new: A larger space has been given to very large paintings by Oskar Kokoschka with photographs of the artist at work; and at the top of the stair a new even larger, curved painting by Cecily Brown – a British painter (born1969).   New spaces have been created for temporary exhibitions and research facilities:   Included in future planning is the rehousing of the Courtauld Institute of Art with a school-age educational programme.  In place,  there are improved visitor facilities with greater accessibility.  It’s in the previously unseen basement vaults that we find the shop; the new Art Café with an all-day restaurant and bar is located on the ground floor.

Funds (costs so far £58m) for the project came from the National Lottery Heritage Fund £11m; Amongst others: the philanthropists Leonard and Lady Blavatnik and the Blavanik Family Foundation

The Courtauld Gallery is open every day 10 to 6pm

If you had avoided this artist’s work – for whatever reason – I beg you, think again and don’t miss this extraordinary show.

This exhibition focuses on Bacon’s fascination with animals how it both shaped his approach to the human body and distorted it.  Caught in the extreme moments of existence, his forms are barely recognizable as either man or beast.  Seen together, these raw expressions of anxiety and instinct –   and human – feel poignantly relevant today.

Concessions available and free to Friends of RA.

This excellent exhibition showcases the ceramic medium through artworks by three generations of Black women artists working in clay.

A major retrospective of the artist’s late career and her fascination with fabric and textiles.