Tamara Tolley: At Home in the Barbican – October

Tamara Tolley is a resident artist working from the balcony of her flat on the corner of Frobisher Crescent above the Barbican Centre.  Employing a range of mixed media, Tamara’s vibrant, fresh and intuitive landscapes of the Barbican reflect her deep love for the Estate, as well as her intimate knowledge of its majesty and an appreciation of its small, intricate details.  Her work has been described as “poetic brutalism” (artist Marianne Greyson).  Artist, Francis Katz, comments that Tamara’s work had “eliminated the space between the artist and the subject … capturing something new and important in every artwork.   That is the joy of knowing your work intimately in an “artist – anthropologist”, narrating the inside daily life of her urban world and its juxtaposition with the natural world (the residents’, gardens birds on the Estate, the palm trees). Her work combines both landscape and figurative elements.  She often includes our gardeners (especially the young female gardener ( whose Rapunzel- like hair Tamara portrays as woven into the ubiquitous yellow hose). Window  cleaners, joggers, members of the LSO, mums with prams and sunbathers in the Sculpture Court.    At night, Tamara engages in what she describes as some “discreet eye-spy” painting the amorphous shapes and lights in the flats across the way.  Tamara feels that the Barbican landscape has become a part of her identity as an artist. 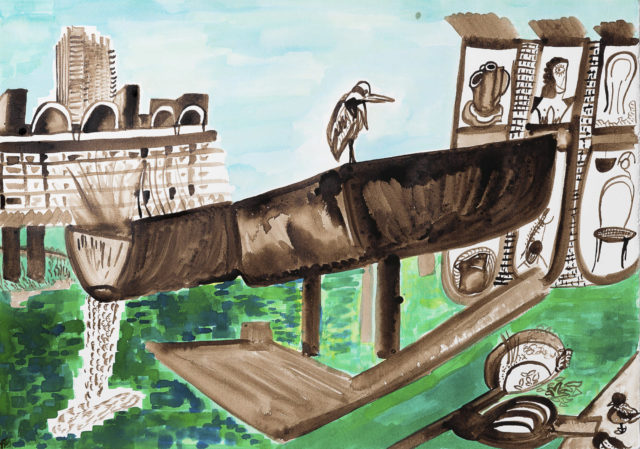 Her website www.tamaratolleyart.com contains much accessible narrative content about the inspiration for her Barbican paintings.  Through her highly successful Instagram page (@tamaratolleyartist), Tamara has introduced the Estate to a world-wide audience many of whom had never heard of the Barbican.  People have commented online that they’d not realised the Barbican was a real place and thought Tamara had imagined this as a kind of paradise which, Tamara jokes, is not far off the truth!  American writer and artist, Anne O’Neal Garcia, sums up Tamara’s work in this way – “I’ve never known anyone to love their home so much”. 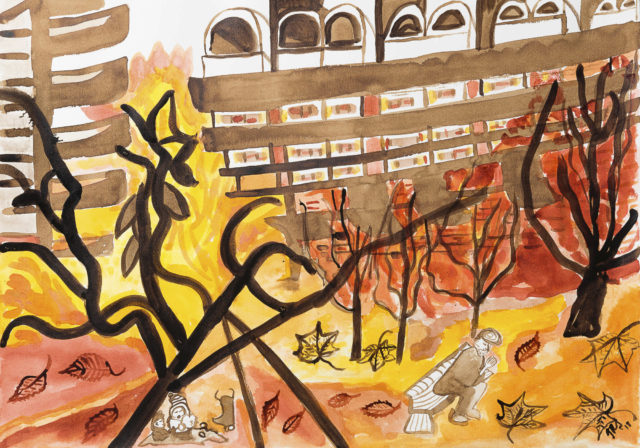 Tamara’s work has sold at the Royal Academy Summer Exhibition 2017 where she was featured on their website, painting on her balcony. She has been included in numerous group exhibitions in galleries in London and Birmingham. Most recently, in May 2019, she won the Cass Art Solo show Award at the Royal Watercolour Society Contemporary Art show at Bankside Gallery (solo show in Cass Art Gallery, Islington, 2020).

Linnet Dawson is a jewellery/designer, who is also a long standing Barbican resident.
Linnet originally trained at Bromley College of Art in order to become a Medical Artist and she subsequently worked in the Illustrations Departments of the Marsden and Guy’s Hospitals during the early years of her artistic career.    Further on she graduated from the Birmingham Polytechnic School of 3D Design as an Interior Designer and then joined an Architects Practice in Queens Anne’s Gate, London.

Flower arranging is an important art form for her, both western Style and Japanese.  Linnet  belongs to the Sogetsu School of Ikebana. 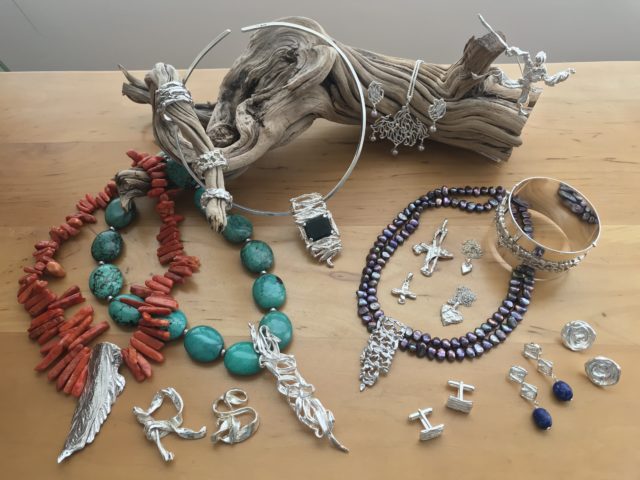 Linnet’s enthusiasm for making jewellery, using the lost wax casting process, originated several years earlier in the School for 3D Design.     She claims that her designs for jewellery accept the fascinating and limitless possibilities of melted wax poured onto various surfaces.  Each wax is viewed to realise its potential, influences by subconscious memory and disciplines of Ikebana.  Final objects are assembled from the chosen pieces to be cast in silver or gold, after which they can be further worked on, finished, polished and Hall Marked.  Original sculptures are unique, although some can be reproduced to extend the design possibilities.     The delight is always in the outcome of wax transformed into metal.

Into the Night: Cabarets and Clubs in Modern Art

This is the second time, recently, that the Barbican Gallery has curated a themed exhibition : Remember Modern Couples: Art Intimacy and the Avant-garde last October – which looked at creative couples working together in the first half of the 20th century, that included  painters, photographers,  architects, sculptors, writers and performers.   Into the Night: Cabarets and Clubs   is the subject matter  which sets out to present a dynamic and multi-faceted history of artistic production spanning the 1880  to the 1960’s  and in a similar way includes artists covering a number of disciplines. 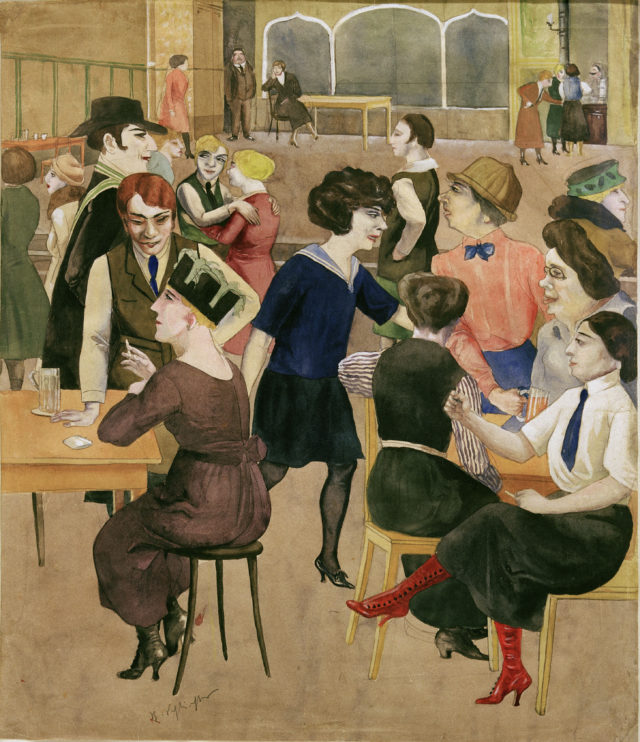 Focusing on global locations from New York to Tehran, London, Paris, Mexico City, Berlin Vienna and Ibadan, Into the Night brings together over 350 works rarely seen in the UK.

It begins in Paris, on the eve of the 20th Century, with two thrilling and iconic locations of the avant-garde.  The theatrical shadow plays of the Chat Noir in the 1880s are brought to life through original silhouettes and works that decorated the interior of the cabaret, which acted as a forum for satire and debate for figures such as founder Rodolphe Salis, artist Henri Riviere and composer Erik Satie.   The captivating serpentine dances of Loie Fuller staged at the Folies Bergere in the 1890s were trail-blazing experiments in costume, light and movement.  Henry de Toulouse-Lautrec captured her performances in his extraordinary series of delicately hand-coloured lithographs, brought together for the exhibition.  The exhibition includes original documentation of Oskar Kokoschka’s exuberant puppet theatre and Gertrude Barrison’s expressionist dance.

In London, The Cave of the Golden Calf ( 1912) an underground haunt in Soho epitomising decadence and hedonism, is evoked though designs for the interior by British artists Spencer Gore and Eric Gill as well as Wyndham Lewis’ highly stylised programmes for the eclectic performance evenings.

In Zurich, the radical atmosphere of the Cabaret Voltaire (1916) is manifested through absurdist sound poetry and fantastical masks that deconstruct body and language, evoking the anarchic performances by Hugo Ball,  Emmy Hennings and Marcel Janco.   This is the birthplace of Dada, where humour, chaos and ridicule reign.

In Strasbourg, Theo van Doesburg, Hans Arp and Sophie Taeuber-Arp worked together to create the L’Aubette (1926 -28) conceived as the ultimate “deconstruction of architecture” with bold geometric abstraction as its guiding principle.

After a period of restraint in Germany during the First World War, the 1920’s heralded an era of liberation and the relaxation of the censorship laws. Berlin played host to heady cabaret revues and daring striptease; The notorious Tiller Girls are captured in Karl Hofer’s iconic portrait. Major works, by often overlooked  female artists, capture pulsating energy of these nightclubs and the alternative lifestyles that flourished within them during the 1920s and 1930s.

In New York the literary and jazz scenes thrived and co-mingled in the predominantly African American neighbourhood of Harlem, where black identity was re-forged and debated.  Painting and prints by Aaron Douglas and Jacob Lawrence plus the poetry by Langston Hughes and early cinema featuring Duke Ellington, shed light on the rich range of creative expression thriving within the city.

Into the Night also celebrates the lesser known Mbari Artists and Writers Club that was founded in the early 1960s in Nigeria. Focusing on two of the club’s key locations, in Ibadan and Osgogbo,   The exhibition explores how they were founded as laboratories for postcolonial artistic practices – including open-air dance and theatre performances, featuring ground breaking Yoruba operasbu Duro Ladipo and Fela Kuti’s Afro Jazz poetry and literature readings.

In Tehran Rasht 29 emerged in 1966 as a creative space of avant-garde painters, poets, musicians and film makers to freely discuss their practice. Spontaneous perfomances were celebrated and works by artist like Parviz Tanavoli and Faramarz Pilaram hung in the lounge while a soundtrack including Led Zeppelin and the Beatles played constantly.

Into the Night Cabarets and Clubs in Modern Art is curated and organised by the Barbican Centre in Collaboration with the Belvedere, Vienna.   Into the Night is sponsored by Mount Street.  With additional support  from the Swiss Arts Council Pro Helvetia, the Embassy of the Federal Republic of Germany, London.

I was watching recently, a National Archives short film made in 1957, of children playing on a London bombsite and it took me back to the games we played and the things we did at that time, just after the second world war:    A time when parents let us go free to explore – when the roads were comparatively free of traffic and woods, fields and barns beckoned.  The summer evenings, when we would gather together again after tea and play ‘Tag’ or ‘Tin Tin Malarky’, or ‘Hide and Seek’, or ‘Grandmother’s Footsteps’ – until  we were called in.   Very ‘Famous Five’ spliced with ‘Cider with Rosie’!

Opening on the 24th October the Wellcome Collection with be looking at Play and in this coming exhibition Play Well will explore the transformative power of play in childhood and in society at large.     Through toys, games artworks and design and how children play now; this exhibition will investigate how we played as children and how children play now, as well as its importance in developing social bonds, emotional resilience and physical wellbeing.    It will examine the relevance of play in the adult world and its vital role in fostering imagination, enabling independent thought and challenging the status quo.    From video games, playing blocks, comic strips and images of children playing in different environments such as playgrounds in the 1950’s or refugee camps, to play space by Adam James, Play Well will invite visitors to consider the impact of play in our lives. 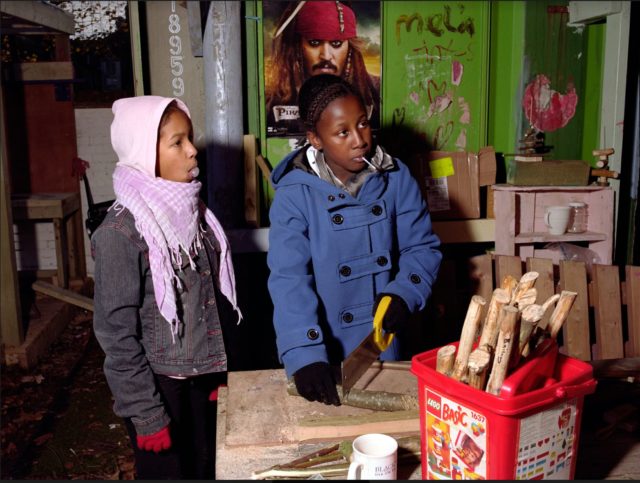 In the first section, Nature/Nurture, examines the importance of play in child development and education, and how it can be employed in the therapeutic work.  It explores the innate drive of the young at play, featuring examples of both animal and human play.

The role of play and its therapeutic importance in uncovering trauma will be considered with material from pioneers in the field Margaret Lowenfeld and D.W. Winnicott, whose archives are held at Wellcome Collection. 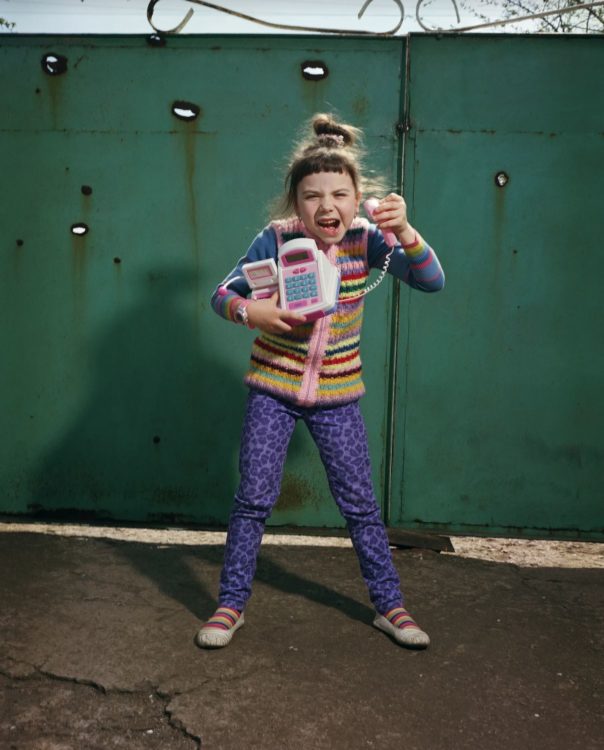 Kristina in Luganke, Eastern Ukraine, an hour after the shelling,by Mark Neville, 2017

The second section, Toys Like Us, will focus on society and how children’s play reflects, alters and adapts to the world around them.  It explores the influence of contemporary culture on playground play, from clapping games, Dancers, children’s handwritten notes to the dances developed through the online videogame Fortnite.
The transformative potential of the imagination on basic playthings like sticks and blocks is highlighted, along the shift towards increasingly commercialised toys.

Meanwhile, fears for safety and the rise of the digital play space have led to a curtailing of freedom for today’s children. Technology offers parents an unprecedented level of surveillance, while video gaming presents its own set of opportunities and risks.

Accompanying the exhibition is a commission by artist Adam James, who examines the role of play in the adult world and its potential to promote empathy between people.

Play Well will be accompanies by Michael Rosen’s Book of Play, published by Profile Books.

The exhibition is curated by Shamita Sharmacharja