Time for a change?

We are living in interesting times. We face huge increases in energy costs; we worry about the impact our heating is having on climate change; and yet our heating system is highly reliable, has minimal maintenance costs, the hardware looks robust enough for another 25 years, and we are lucky in having a team of knowledgeable, responsive engineers who know our system well. However, the BA’s (Barbican Association) recent survey of residents (more on this later) revealed dissatisfaction with many aspects of the system.

We’ve been grumbling for years about the inadequacy of our heating. The current hike in energy prices should galvanise us to make the changes, which will reduce costs, shrink our carbon footprint and increase the value of our properties. Implementing these changes is going to be hard work and will require resolute and determined action by residents. Navigating the lease will be particularly difficult , and it may be that the only way to bring about change is on a block by block basis. 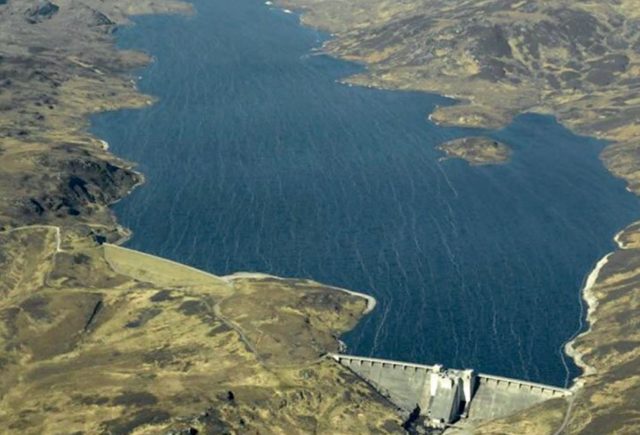 So why the landscape photography?

This is the Orrin reservoir and dam in North Scotland with a peak output of 18 MW. That’s 18,000 1kW electric fires.

This matches exactly the power needs of our underfloor heating. Of course, we don’t get our power from Orrin directly, but they, like us are connected to the National Grid.

Size has advantages; we have huge purchasing power, which means we can buy our electricity at advantageous rates.

In a Barbican survey of residents

A recent engineering survey found that

The issues raised by residents arise mainly from the clunky control system. Our heating was designed in the 1960s when energy was cheap, occupancy patterns were different, and when people had lower expectations of comfort.

Additionally, the distribution of heating loads over the day are still set by the daily profile of energy costs that applied in 1965.

The system has no feedback, i.e. no thermostat; relies entirely on the profile of outside temperature, and every flat, regardless of block, gets the same number of hours of heating each day.

This is another hark back to the technology and economics of the ‘60s. Insulation back then was bulky, expensive, and much of the insulation on offer wouldn’t meet current fire regulations. Today, insulation is cheaper, more effective, less bulky and easier to install retrospectively.

Our air management systems which sucks air into our flats 24/7 were designed in the pre-computer era. This, together with leaky block entry doors, particularly in staircase blocks, means that our flats are colder than they need be, and are harder to heat.

So far we haven’t mentioned our carbon footprint, which is the largest in the City’s property portfolio. Because of the UK drive to decarbonise the energy sector, our carbon footprint has been reducing year on year. In the seven years to 2020, it fell by 66%. If the government meets its targets and we make no changes to our heating system, by 2035, the electricity powering our heating will have a zero carbon footprint.

This means that the major driver of changes we make are to improve our comfort and reduce cost. But reducing our carbon footprint will be a useful by-product.

Cost as a driver for change

There is enormous uncertainty in electricity prices, but certainly our heating costs are about to become eye- wateringly high. Since 2017/18 our heating costs have risen by 24%. Next year they are likely to rise by a further 37%, despite our huge purchasing power, before falling back by 17% in 23/24.

This means that for a typical terrace block flat, heating costs will be around £1,500 for 2022/23. The chart below shows how the heating costs for the whole estate have changed since 2017/18 and the likely future costs. 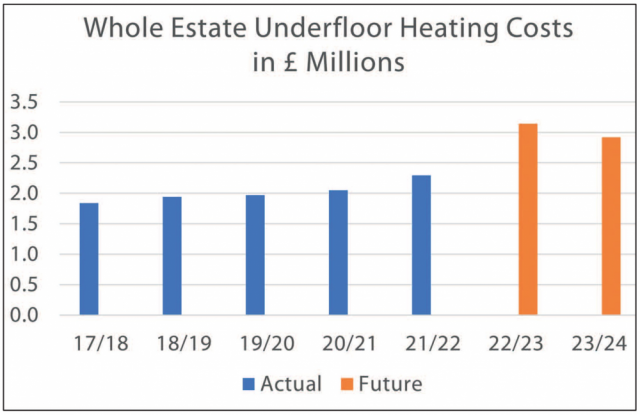 The robustness of our heating system

Is our heating system robust enough for the next 25 years? Can it respond to any of the changes we need?

It’s good to know that the answer to both these questions is yes. The heavy duty risers that take power from the external mains supply to our flats have been surveyed recently and are in good enough condition to last for the next 25 years. A new control system was installed in 2007, which enables minute by minute switching of the heating right down to small groupings of flats. For example, the system can control, independently, six separate groups of flats within Shakespeare Tower. The only area of potential weakness are the floor pads which heat our flats. These fail at the rate of around 50 each year (there are over 8,000 on the estate) and our engineers are able to repair them within a few days of failure.

Who is going to pay for all this?

The BA has persuaded the City to pay for a study of the potential interventions that can reduce our energy use. It will be completed by the end of June, but in the meantime we have had access to some of the findings, which have informed some elements of this article. Apart from that, it is highly unlikely that the City will make any further contribution to the costs of any changes.

From time to time Central Government announces insulation support grants, like the Green Homes Grant, which is now closed. These are invariably aimed at low income groups, and even if the criteria were relaxed, we would not be eligible.

Like all other homeowners we will need to pay for the interventions which were outlined earlier; they are indeed improvements. The two major areas of intervention are; improvements to the fabric of our buildings and giving greater control of the heating to residents.

Changes in the fabric

It is highly unlikely that any changes to the fabric of our buildings will be implemented on an estate-wide basis as as they will need to be tailored and paid for on a block by block basis. Even at this level this will be challenging. Take Andrewes house as an example. There is a clear case here for insulating the soffits and the barrel vaulted roofs, which will improve comfort and reduce energy costs. But how will this be apportioned to individual flats? Clearly above podium and top floor flats will benefit most, but the benefit diminishes as the middle floors are approached. There is no benefit at all for sub-podium flats. Allocating the costs for these changes will be very challenging.

The BA survey suggested there was majority, but not unanimous support for individual controls. Individual heating control means that power must be available at the flat fuse box year-round, 24/7. Consequently an opt in/opt out solution could be proposed, where a base line load would be provided and residents that wanted their own controls could pay for their installation and for any additional power used. Residents who did not want individual controls would have their heating switched in line with the new base line load.

To accommodate the needs of those residents (about 30% according to the survey) who want to reduce their heat load, this base line load would need to be less than the load that is currently provided.

It seems likely that, as with the fabric changes, a block by block approach to these changes may be necessary.

There is much to think about here and many of the suggestions are contentious and will generate much discussion. To this end the BA has set up forum on its website, where you can have your say. You can find it here. https://barbicanassociation.co.uk/underfloor-heating-fit- forpurpose/

We expect the full results of the City’s study before the end of June and as soon as it’s available it will be published on the BA website. In a few months the BA and the RCC (Residents Consultation Committee) will host a town hall meeting solely devoted to our heating, where we can try to find a way forward.