Suzy Waite gives us some background on the City of London police horses and their welcome autumn trample through our Barbican Wildlife Garden. 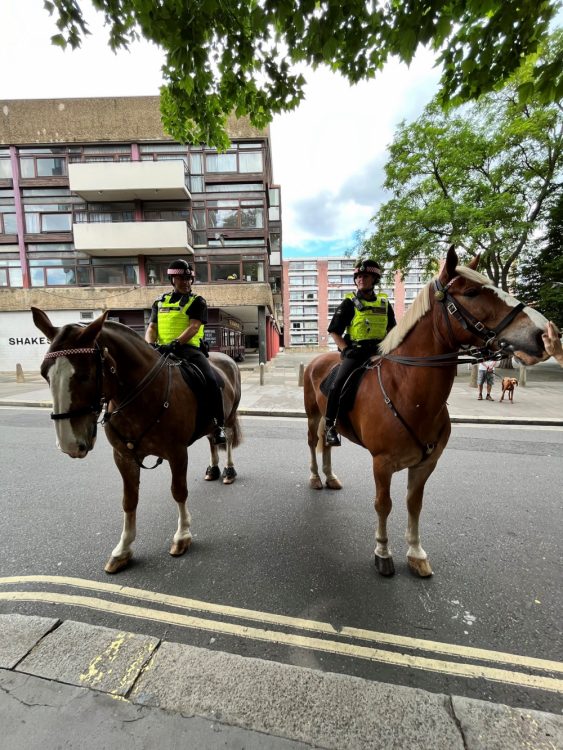 It was Open Squares Weekend, an annual event when private gardens in London, such as the Barbican Wildlife Garden (BWG), open to the public. Jo, who heads up the BWG volunteers, was checking tickets at the entrance of the former World War II bombsite. Poppies, ox eye daisies, yellow rattle and meadow cranesbill were in full bloom. Visitors enjoyed home-baked Victoria sponge and lavender shortbread with a cup of tea.

“Aren’t they lovely?” cooed a visitor as a small crowd gathered, stroking Clyde and Trug. PCs Nicky and Tony were questioned about the City Police’s patrol route, where the horses live and whether it was possible to feed them. (Clyde rarely says ‘no’ to food. If he passes Beppes Café in West Smithfield, the staff give him a carrot. “So whenever we’re nearby, he steers us towards it,” Nicky told the crowd.)

Each autumn, the City horses work in the Barbican Wildlife Garden itself. They are invited in to trample and graze, which helps maintain the wildflower meadow.

“For us, that engagement with the community is what it’s all about,” PC Nicky explained a few weeks later in an interview that took place in mid-July at Great Scotland Yard’s stables. “You wouldn’t believe the number of people who come up to us to talk about the horses. That is a positive experience with a police officer, and is exactly what police forces need across the country. One positive interaction can last a lifetime.”

The importance of positive police interaction was underscored in a 2014 study undertaken by the University of Oxford and RAND Europe, an independent, non-for-profit organisation. Conducted over a year-and-a-half, it assessed the value of mounted police units in the UK by monitoring public reactions to them in different roles, including neighbourhood patrols, music festivals, football matches and public demonstrations. 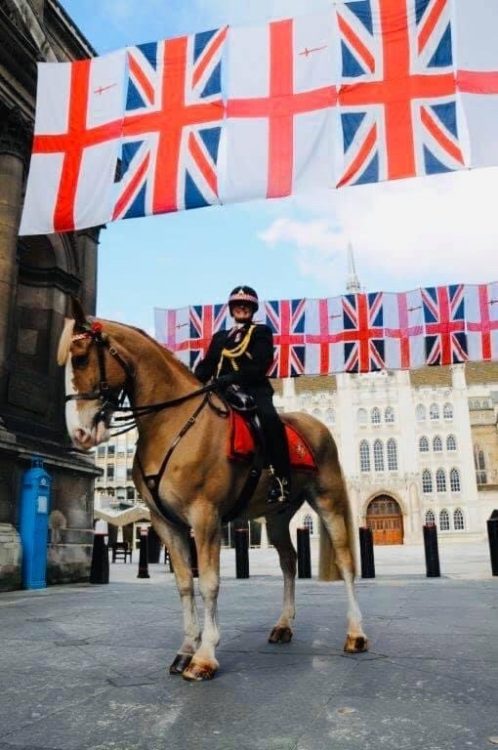 “The horse and rider combination appears to act as a sort of ambassador and ‘ice breaker’ for the police,” research co-author Dr Ben Bradford, from the University of Oxford’s Centre for Criminology, said in the accompanying press release. “People come up to say ‘hello’ or to make a fuss of the horse before a quick conversation with the officer. Although most of the exchanges we saw were brief, they tended to be very friendly, and the patrols increased police visibility.”

Those positive exchanges lead to higher levels of trust and confidence in the police.

Mounted officers also have a unique role at crowded events where disorder is more likely. The study showed a police officer on a horse can intervene when other resources, such as police on foot or in vehicles, would be ineffective or potentially aggravate the situation.

From Wood Street to Westminster

Clyde and Trug are members of a five-strong horse unit for the City of London Police force, with an additional two horses in training.

For over 50 years, the City Police horses were stabled within the Square Mile in the Wood Street Police Station, a Grade-II listed building. They split their time between these stables when working, and Bushy Park in Richmond upon Thames on their days off.

Historically, two horses worked one three-hour morning shift patrolling the City, then came back and switched with another pair for the afternoon shift.

Just Another Hay in the Office

Police horses are a familiar sight in the Square Mile, patrolling past historic venues such as Ye Olde Watling Pub, St Paul’s Cathedral and the Bank of England. City residents, tourists and workers rush up to speak to the officers, asking if they can take a selfie.

The horses are equally effective partners at night when dealing with the drunken and disorderly.

“I’ve been in situations with high-risk groups, who are drunk and looking for a fight,” PC Nicky said. “We ride up and the horse puts its head in between them. It can make people laugh. The horse very quickly makes a tense situation funny and often ends up calming the situation down.”

The ice has been broken.

“People are far more likely to approach you when you’re on a horse than if you’re on foot,” PC Nicky said. “They break down that barrier with the public. Horses are an engagement tool.”

In addition to their daily duties, other events include football matches, the annual Lord Mayor’s Show in the City, Pride Community Parade in Brighton, the 2012 Summer Olympics and Richard III’s reburial in Leicester. Plus, they visit London schools — nursery, primary and secondary — to educate pupils about the police force.

The City Police horses also assist the Met Police horses during the changing of the guard at Horse Guard Parade. Although escorting the (now) King’s Life Guard technically falls under the Met’s jurisdiction, it is a useful drill for the City horses.

“It’s great training for them to be around bands, soldiers and huge crowds,” PC Nicky explained. “Clyde doesn’t like soldiers, so it’s really helpful to train the horses to get used to seeing them. There aren’t many opportunities otherwise.”

While most of the horses’ work is community-focused, they play an important role in counter terrorism. Notably, in 2017, during the terrorist attack on London Bridge, four mounted officers were dispatched from the Wood Street stables. Arriving on the scene in eight minutes, they escorted onlookers away from London Bridge and towards Cannon Street.

“Horses are fantastic for crowd control, you can ride between buildings and crowds and guide people to safety,” PC Nicky said. “That’s much more difficult on foot, and nearly impossible in a car.”

The horses also play an imperative role in deterring, detecting and disrupting criminal activity, whilst providing a reassuring presence for the public.

The City is Our Home

Recently returned from a morning shift in the City on a stifling hot July day, Clyde and Trug were enjoying the air conditioning in Great Scotland Yard’s stables. Clyde, after perhaps one carrot too many, ignored his extra hay; more interested in his surroundings, he kept poking his head out of his stall. Trug, who had been put on a diet, looked forlornly at his neighbour’s stash.

Two Met mounted police officers came into the stables after a morning shift of working in Westminster. Both officers dismounted and guided their horses up a ramp to get them rubbed down.  They too were looking forward to a well-earned rest.

Despite their temporary accommodation in Westminster, the City of London police horses will continue to call the Square Mile home and be a reassuring presence on our streets.  And once again this autumn, they will be visiting the Barbican Wildlife Garden to help with meadow management, as part of their community and patrolling duties. Jo and the other volunteers are looking forward to welcoming them back!

To follow the City Police horses and their search for a new home, following them on Twitter @CityHorses.