Earlier this month,  Jason & Irha Atherton and The Social Company launched their seventh London restaurant with the opening of Sosharu, a Japanese izakaya-style restaurant situated within the Turnmill Building on Clerkenwell Road. A 40 cover cocktail bar, Seven Tales, is located in the basement of the restaurant. 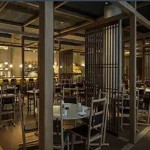 Sosharu is a collaboration between Jason Atherton and Executive Head Chef Alex Craciun, who has worked within The Social Company for four years, previously sous chef at Pollen Street Social. In preparation for the launch, Craciun relocated to Japan on a research trip, spending the year studying at the Kyoto Culinary School. He also worked at restaurant Kikunoi under Chef Yoshihiro Murata in Kyoto then RyuGin under Seiji Yamamoto in Tokyo. He is now set to bring his culinary experience and expertise of Japanese cuisine to Sosharu.

Atherton says “Sosharu is a complete departure from anything I’ve done before, which makes it that much more exciting for us. This restaurant has been a long time in the making as we wanted to get it right – Alex has dedicated himself to learning everything there is to know about Japanese food in the past couple of years and the result is some incredible cooking. I can’t wait to open the doors.”

Kisetsu, meaning season, is an entirely separate dining space with its own kitchen, accessible via the main entrance to Sosharu. Here, a tasting menu will is served in fine dining style adopting the ‘omakase’ tradition. Loosely translated as ‘trust the chef,’ diners are offered a bespoke daily changing menu chosen by Craciun. Guests will be seated around a kitchen counter with the interiors changing seasonally to coincide with the Japanese name.

Seven Tales cocktail bar is said to be reminiscent of the night-time atmosphere of Tokyo. Headed up by Bar Manager Geoff Robinson, formerly of Happiness Forgets and Experimental Cocktail Club, the drinks menu will be inspired by Japanese culture and philosophies, such as Munenori’s Mojito, a twist on a mojito made with cold-brewed matcha, nigori, Cuban rum, tonka bean and absinthe; and Yugen, containing rose vermouth, citric acid, hibiscus salt and sparkling sake.

Designed by Shanghai based studio Neri & Hu, also responsible for Atherton’s Pollen Street Social, the striking interiors of the 75 cover restaurant play with notions of Japanese domesticity. The ground floor is framed by an abstract timber structure, inspired by traditional minka houses, evoking the intimate experience of sitting in a Japanese home. Downstairs, guests can experience the more urban side of Japan in basement bar Seven Tales, where Tokyo’s subculture is reflected through walls plastered with a bespoke wallpaper depicting Japan’s golden age movements in the early sixties.

Sosharu is an exciting addition to Clerkenwell’s thriving community and is set to become a unique dining and drinking destination for London foodies, locals and international commuters alike.