The yellow fog swirled around the street and drifted across the gas lamps, producing surreal, somewhat tacky, pastel colours not seen outside the cheaper emporia purveying Turkish Delight. Even so, as I approached 221B Baker St, I felt that the air had quite a Christmassy feel. 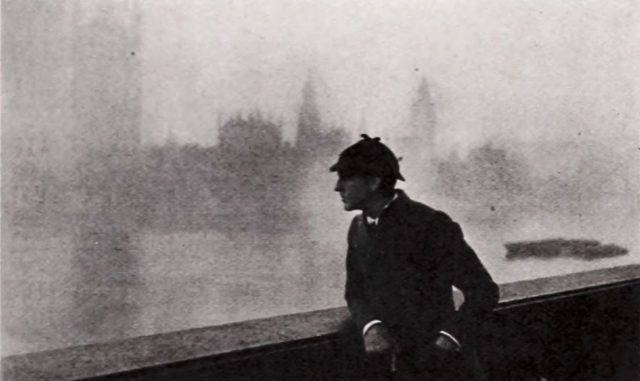 Despite the B suffix, an obvious give-away in my opinion, most visitors to Sherlock Holmes are a little surprised that he lives in a multi-occupancy building. There is a 221A and 221C. I am sad to say that the two other tenants have rather taken advantage of their celebrated fellow tenant.  221A, according to the name plate, has a Shylock Holmes Detective (Divorce and Petty Cash infringements a speciality). 221c is an Estate Agent – Sherlock Homes (speciality premium garrets).

Each flat has a bell pull. Normally such arrangements mean that a sharp tug at your end and, by a series of pulleys and counterweights, a distant bell rings in the appropriate flat. At this building the Landlord, ever the innovator, has a new system based on steam traction and gas. Although remarkable and ultra-modern in its way there is always a delay, while the kettle boils, before the bell rings. However, it gave me a chance to review the current Medical Journal, on the latest strains of Cholera -19. Unfortunately, a new vaccine, declared as a wonder cure by many, has a 100% fatal reaction. As the saying goes ‘if it doesn’t kill you, it will make you better’: it had certainly reached stage one of that trial.

Squinting through the fog, she greeted me ‘Ah, Dr Watson, I presume.’

‘How is Sherlock?’, I enquired.

This was a worrying trend. It was due to both Sherlock’s detection skills and a harsh penal system, where, for example, a recent shoplifter stealing a Queen Victoria Golden Jubilee Mug and Tea Towel was awarded 50 years penal servitude by a judge with a deep sense of humour.  Many of Sherlock’s adversaries are behind bars or have been transported. So much so that there is little work left. Sherlock was even considering setting up a branch office in Australia, until I pointed out that he would have to swap his infamous deerstalker hat for the kangaroo model. Few realise it, but behind the outward mask of finely groomed hair, manicured nails and a strong scent of pomade, the ‘inner’ Sherlock is a vain man, and a Kangaroo stalker hat with pendant corks would have been a bounce too far.

Of course, not that all of Sherlock’s adversaries were human. However, the infamous Hound of the Baskervilles was now in a High Security Hound Pound  at Battersea Dogs’ Home. The Hound’s soulful baying can sometimes be heard as far as Highgate on a quiet night.

As we ascended the stairs, Mrs Hudson said that he passes the time by playing sorrowful tunes on his violin or by injecting cocaine. Although Sherlock maintains that cocaine  increases his powers of detection in much the same way that Popeye the Sailor Man was boosted by ingesting tinned spinach;  it has to be said that each method (spinach vs cocaine) produces quite different outcomes.

We entered his sitting room, bereft of Xmas decorations (no surprise there, obvs), and there was Sherlock sitting by the fire staring at the ceiling with lacklustre eyes.

‘His lottery numbers have failed again, even the Thunderball’, whispered Mrs Hudson. Sherlock reached for his violin and began the slow movement from one of the more sorrowful pieces.

Mrs Hudson fearing it would set off the distant Hound, interrupted. ‘Why not try a bit of G and S?’

She then started singing ‘ I am the very model of a modern Major General….’  Sherlock noting that Mrs H, in her housekeeper’s outfit looked nothing like military top brass, rolled his eyes and reached for his cocaine. It was then I played my Trump Card.

‘Sherlock I may not have a case for you, but I do have a box.’

He tried to feign uninterest, but his eyes were fixed on the large box in my hands, wrapped in a paper decorated with Santa’s Reindeers. I gave it to him and he hurriedly unwrapped it to reveal ‘Cluedo the Board Game’.

I tried to explain the basic principles. Up to now Board Games had not been a success with Sherlock. Snakes and Ladders never got started because he began to lecture me on the 10,000 varieties of snake and how many were associated with a crime scene.

Oblivious to my explanation now, he scrutinised the contents closely. He appeared to be convinced that Cluedo was a real case.

‘Reverend Green, Colonel Mustard, Miss Scarlett…. All of the suspects have names associated with a colour. They may well be members of Professor Moriarty’s Rainbow Syndicate of Malfeasance. The floor plan of the house makes little sense. It has many rooms including a ballroom but no upper floor.  Indeed all the rooms of this bungalow  are the same size including the ball room and the study.’

‘The alleged homicidal weapons, lead piping, candlestick, dagger…. are all very small. Is Moriarty’s plan to decrease the size of the human race, Lilliputian style, and then kill them off with these micro weapons?’

I tried to reason with him. Electricity, I pointed out,  was still in the theoretical stage and a steam and gas powered ray gun was unlikely to be effective. Mrs H then chipped in saying that if we were all tiny then our carbon consumption would dramatically reduce, and it would stop Global Warming in its tracks.

I don’t know where Mrs Hudson gets these wild theories. Her Diploma in Housekeeping Studies at Balliol seems to have turned her head towards the grove of Scientific Academe and possibly Witchcraft.

However, I could see that, rather liking selling concrete lifebelts, my Cluedo game was doing more harm than good, so I tried Plan B.

‘Sherlock, why not get away for a winter break. – the Reichenbach Falls are very pretty at Xmastide.’

‘Oh no’, pooh-poohed Sherlock. ‘I will be far too busy. I have taken the opportunity, as each of my malefactors is accommodated at her Majesty’s Pleasure, to buy their houses at a knock down price.  You may have seen my business, Sherlock Homes in 221C. I have quite a portfolio now including some properties in Harley St which are rented out at an overly  modest price – more specifically the one you reside in , dear Doctor.

‘Egad indeed, you may even venture a Gadzooks. Your rent is tripling!’

‘Dear Doctor. He said in a softer tone, It’s not all bad news. I have a Xmas  gift to you.’ He opened the lid of a large Mahogany Chest just by the mantelpiece. He delved inside and produced a box of Monopoly. With that he laid the board on a table and gave the counter in the shape of an iron to Mrs H, a shoe for me and a silver top hat for himself.

He picked up the dice in his hand and rolled them like an expert croupier. ‘Merry Xmas, omnes, I feel it might be my lucky night.’

Published in the Winter issue of Barbican Life magazine, December 2023