L’Anima Café – bright, efficient and with some great Italian dishes

L’Anima Café – bright, efficient and with some great Italian dishes

The redevelopment of the area immediately to the north of Liverpool Street Station has expanded the City business district right up to Worship Street – an east-west thoroughfare running from the north end of Finsbury Square to the north end of Bishopsgate (Norton Folgate/Shoreditch High Street). As a result the area has also spawned a number of new restaurants which cater to a clientele from the vast number of new high quality office buildings which have sprung up there and, of course, also for those coming from further afield as some of these are extremely classy eating establishments.
One such office block – the very large Broadgate West 2 development – bounded by Appold Street, Worship Street, the grassed-over Vandy Street and the pedestrianised Snowden Street, houses three of these – the Michelin starred HKK Chinese restaurant (reviewed in these pages in our Summer issue), the very highly rated southern Italian restaurant L’Anima – and now an offshoot of the latter in L’Anima Café and Deli, a less costly and less formal offspring of its parent. It is about a ten minute walk from the eastern end of the Barbican. 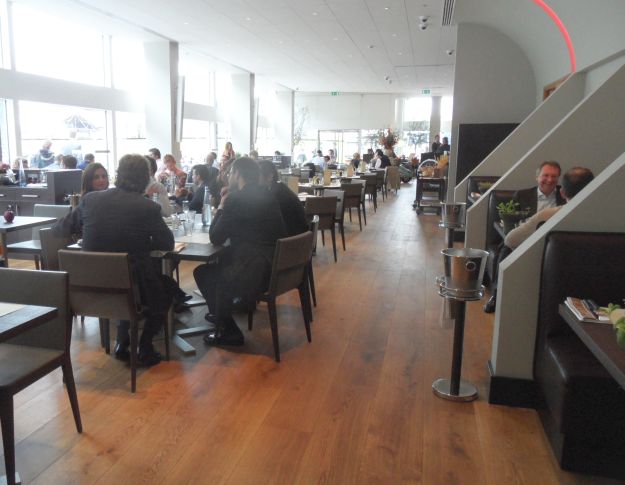 Indeed one can eat at relatively low cost at L’Anima Café taking advantage of the lunchtime specials in the deli section, or perhaps sharing pizzas in the main. Yes, the main restaurant is definitely lower priced than its parent, but it is still quite pricey, except perhaps for the pizzas which are at prices that wouldn’t look out of place in a pizza chain restaurant. Eating out in a decent restaurant is not something someone on a tight budget can do much of on a regular basis in our area these days unless one is very choosy on choice of dishes or on an expense account.
So saying, on a Friday lunchtime both the main restaurant and the deli were packed out with a very cosmopolitan City crowd. At a table on one side of us was a group of six, all speaking Italian, and on the other side a Spanish-speaking foursome, demonstrating how international a business centre London has become.
L’Anima Café is a large restaurant, bright, high ceilinged and modern, with wood floors, but with plain wooden tables and chairs instead of the white tableclothed and leatherette chairs of its parent round the corner. Service was efficient and fairly quick given how full the restaurant was and there was a nice, but not overwhelming buzz. A review in the Guardian said the restaurant ‘lacked soul’, but then ‘soul’ in a modern day restaurant is often associated with dark and dingy surroundings and indifferent service. L’Anima Café could not be accused of either.
No free bread here. But then the bread selection, with accompanying anchovy and aubergine dips, is probably a bargain at £3.75. It arrives in a small basket containing several different bread types, a couple of which are heavily flavoured an d a delight, plus a couple of bread sticks (after all it is an Italian restaurant).
We started with grilled calamari in a tomatoey sauce (£8) and raw fillet of tuna, shaved celery and a lemon dressing (£12). While the calamari was good it wasn’t exceptional. I think I was expecting it to be crisp but it wasn’t – my misreading. The tuna was obviously from a great piece of fish. It was truly delicious if you’re into raw fish. 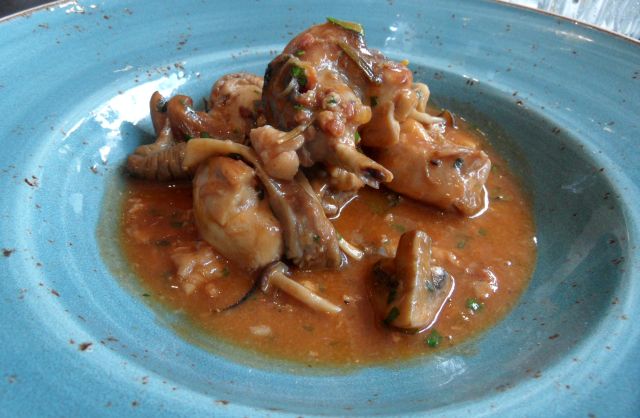 I followed this with the Hunter rabbit stew (£14) – something my dining companion said was her favourite having eaten there before. I have to say it was indeed excellent – tender and moist in a very tasty sauce. It took me back to freshly prepared rabbit stew when I was a child living in Dorset when wild rabbit was readily available (and my mother was a great cook). I’ve tried rabbit elsewhere but this was the best I’d had. It doesn’t come with any vegetables so we had a dish of green beans dressed with what was called Neapolitan sauce (somewhat similar to the tomatoey sauce which accompanied the calamari starter). The beans were cooked just right. Too much perhaps for one person but easily adequate for two.
My companion went for the squid ink linguini with chilli and lemon (£11.50). The squid ink turns the linguini a uniform black, but with flecks of white calamari and a great sauce this was really excellent too.
The wine list appears in two places – a smallish listing on the main menu and then a separate wine list. It is not hugely expansive as in some restaurants. On the face of things nothing is available by the glass which is a shame although the house wine – a white Trebbiano and a red Sangiovese – can be bought in 1/2 litre and 1 lire carafes at £11 and £20 respectively. However my companion commented that Prosecco is available by the glass so we washed our meal down with glasses of this and of sparkling water, although the latter was not very sparkling and for my taste could have been colder.
We passed on dessert (prices from £5 to £7.50) – maybe the additional input of the great breads at the start made this a dish too far, but ended with a cup of very good coffee for me and peppermint tea for my colleague.
Overall cost: Although this didn’t seem much like an extravagant meal, the food itself came to just short of £50 for two, but with added wine, coffee, sparkling water and service the final total came out at just under £50 a head. Such is the cost of a modest lunch in the financial district today. A similar meal would have cost quite a bit more in the parent restaurant on the other side of the building no doubt. But the food was good and tasty and, as noted earlier, the service was efficient. Given the restaurant, which is large, was full, that is obviously what the mostly business clientele are happy to pay for a lunch out on the northern edge of the City. And, of course if, as we said earlier, one was prepared to share a more than adequately sized pizza as some of the Italians at the neighbouring table were doing, and pass on the vino the cost would come right down too. 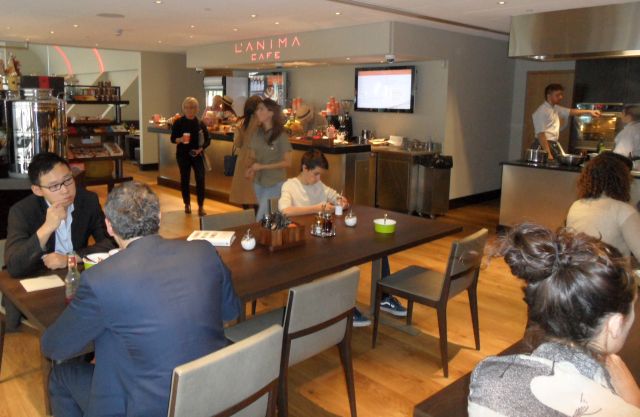