London Steakhouse Co is discretely tucked away around the corner from Dirty Dicks pub on Bishopsgate.  We tubed to Liverpool St. from the Barbican because I had a lazy partner in tow, but it’s not too long a walk through the Liverpool St station concourse and straight out the other end. 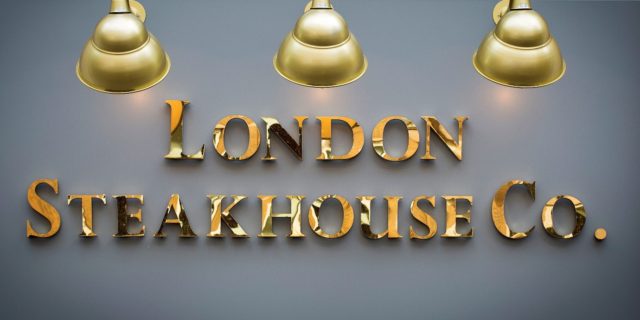 I don’t see any mention of Marco Pierre White even though when it opened in 2008, the restaurant was the first and original Steakhouse to bear Marco’s name (followed a year later by another in Chelsea).  These two are the only restaurants worldwide in which White is a major shareholder. 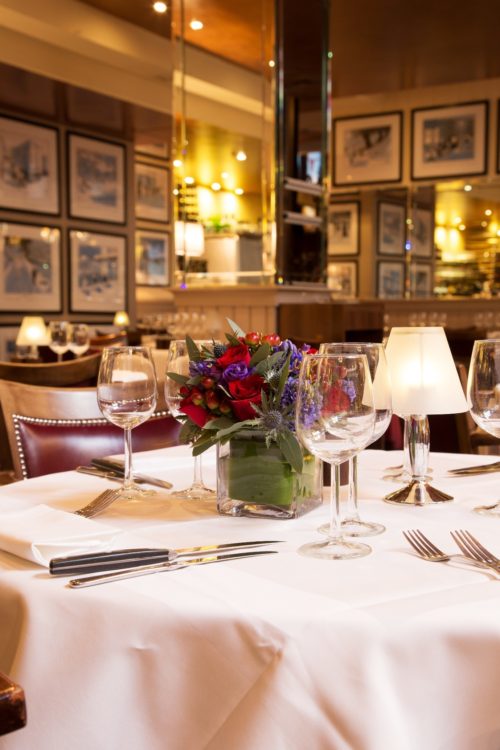 The interior is efficient and spacious without being echoey.  Décor and lighting make you think you are in a simple but upmarket family restaurant and the mouth-watering choice of steaks and other timeless classics on the menu are equally comforting.

One of the very many subtle but clever aspects to the layout was their conversion of a few of the 4 seater circular tables to seat just 2 people, so you can sit close together (not forcibly perpendicular or facing) if love is still in the air.

Even though Marco Pierre White returned his three Michelin stars in 1999, he has an impeccable crew taking care of things here.  From the coat-drop to the loos, everything is top-notch without snobby intimidation.  I read that Marco Pierre White has a reputation for not pandering to or patronizing his diners but our waiter was just the right amount of attentive and even had that gorgeous surfer dude look that Marco oozed in his early years.

I’m not a wine expert but there seemed to be a large wine selection with many available by the glass. We started with cocktails, and I ordered the Gingersnap.  Served in a very generous Martini glass, this is a mix of vodka, lemon juice with a strong dose of ginger and was great for spice lovers like me who feel the cold.  My partner chose the Lime Caipirinha; served in a large Whiskey tumbler, this national cocktail of Brazil is made with Cachaça which is a spirit made from sugar cane.

Like the internal décor, there is no pompous fuss and palaver as our waiter came to take our order for dinner.  Here, I must pause and mention the staff at the Steakhouse who were outstanding, not in an elitist way but with a quality of service that is warm, friendly, professional and definitely worth a special mention.

There is an excellent Set Menu at £27.50 and also a Children’s Menu.  As well as the À La Carte Menu, there is a very informative Allergens Menu detailing the dishes for anyone with sensitivities.  There is a vegetarian option always available on request and all menus are available 7 days a week.

I chose the Grilled Scottish Langoustines with garlic butter & fresh lemon.  I feel for the poor staff who have to wrap all the lemon halves in muslin for our convenience, but they don’t seem to bear a grudge.  The meaty, sweet delicacy was conveniently halved for easy access and they were delicious with a generous helping of salad. 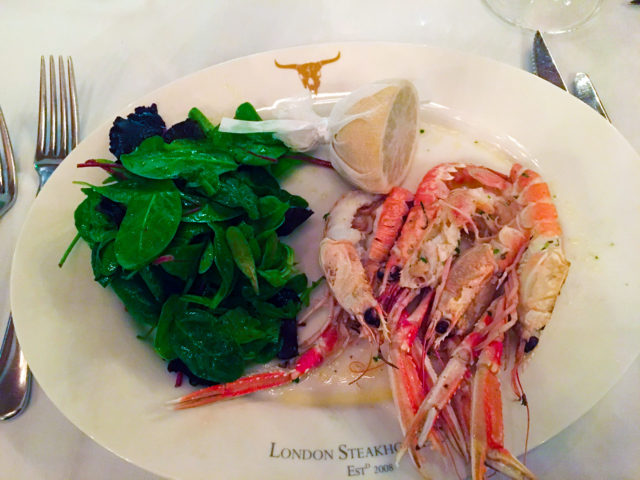 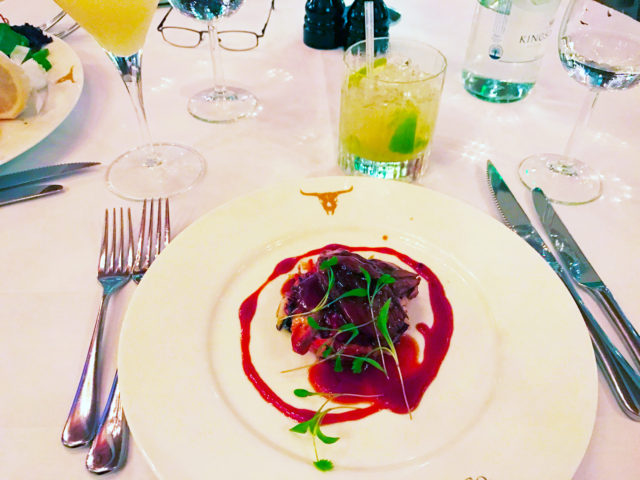 My partner chose the Beef Short Ribs with the house BBQ glaze & coleslaw.  Fortunately, I also happen know that this was delicious because I stole a couple of forkfuls when she was powdering her nose; the sticky sweet sauce and melt in the mouth meat was very moreish and combined well with the calming but crunchy coleslaw.  The portions are decent sizes so please take note that you have to be really empty to manage 3 courses.  We pressed on, valiantly!

Optionally (and especially for Atkins fiends), you can also top your steak with: Maple Cured Bacon  £4.50, Two Fried Eggs £3.50 or Langoustine Tails £6.00.

My partner loves steak, chose the 6oz fillet and hasn’t enjoyed steak so much since she was last at an another protein punching South African steakhouse in Johannesburg.  The meat was perfectly tender and the tasty peppercorn sauce had a smooth consistency (and stayed that way when sauces at other restaurants look rather awkward and stiff by the end of the course). 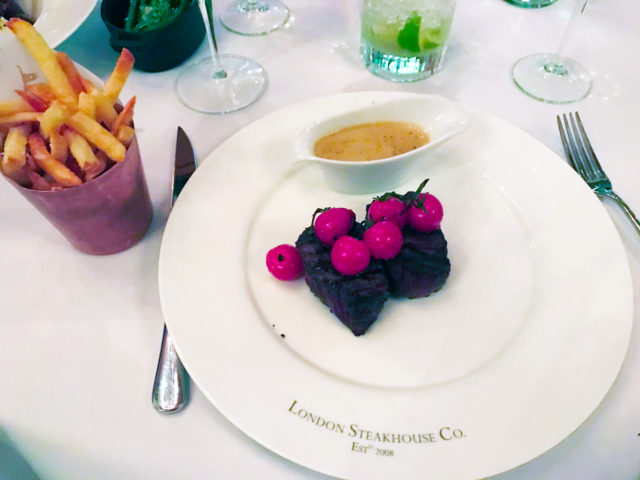 In addition to the steak cuts, the menu has a small but well-chosen selection of classic alternatives including: Classic Chicken Kiev with a dressed herb salad £17.50, Honey Roast Pork Belly Marco Polo with cannellini beans £16.75 and Braised Boeuf Bourguignon with creamed potatoes £18.50.

As Winter is now officially here, I couldn’t resist a warming portion of Boeuf Bourguignon.  The meat was sweet and tender lathered with the deep robustness of the stew sauce.  Served with creamed potatoes I had to protect from my partner’s fork, this must certainly be one of the most delicious beef dishes concocted by man. 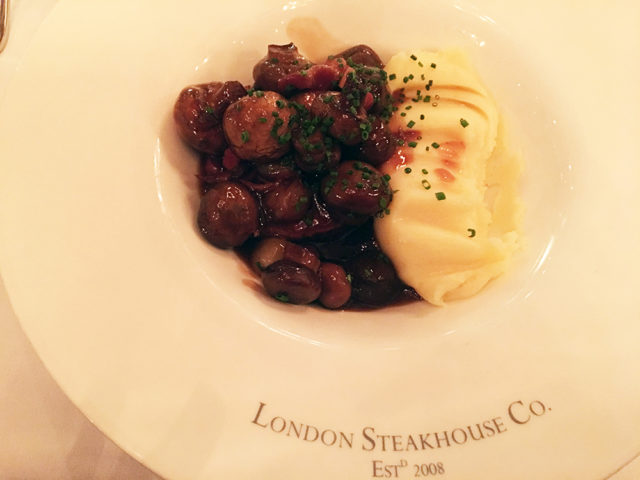 London Steakhouse Co. has already raised more than £4,000 in five months by donating 50p from the sale of each portion of fries to CLIC Sargent, the UK’s leading childhood cancer support charity, but that wasn’t the only reason we shared some House Fries!  We also ordered the Seasonal Veg, a generous helping of hot, crunchy-fresh green beans in a garlic butter.  Both side orders were cleverly delivered in hot (but not dangerously so) mini serving dishes which keep them nicely warm. 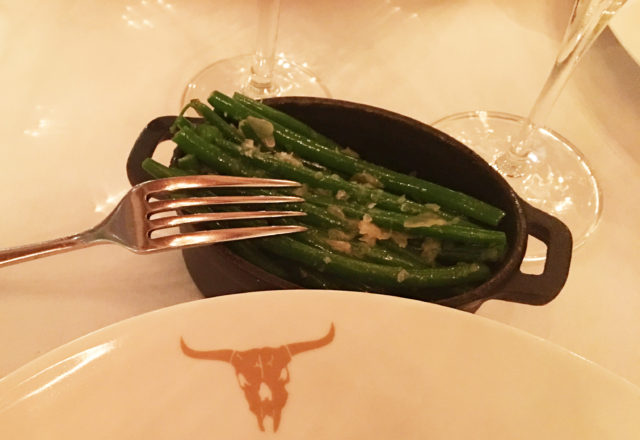 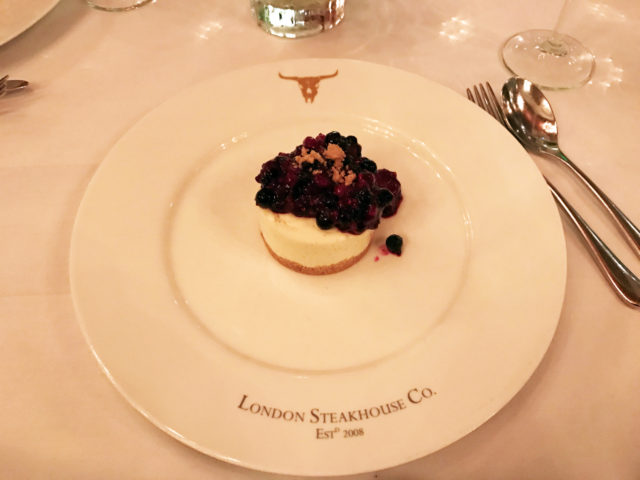 The Puddings Menu lists Dessert Wine recommendations to try with each dish which is a clever touch to help you out with selection. 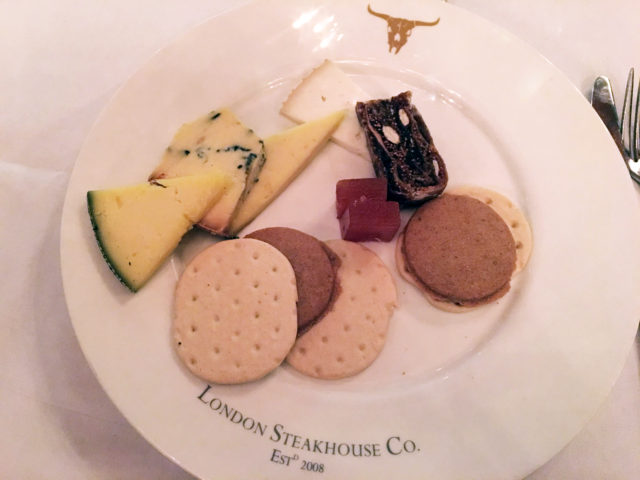 The Cheese option is British and at £9.50 includes a generous amount of each of the following: Colston Bassett Stilton, Lynher Dairy CornishYarg, Ticklemore, Westcombe Mature Cheddar and some Almond Fig Cake and Quince Curd.

My partner chose the delicious Vanilla Cheesecake for Pudding. Obviously sweet and slightly tart, the cake itself is moist and rich, while the berries are plump and juicy.  The combination creates a decadent scrumptious circle of heaven.  I chose the Cheese.  Unlike other restaurants I have been to where the cheese platter is a magnificently presented “event”, the unassuming understated style of the Steakhouse presents the cheese, biscuits and garnishes on a simple plate with no fanfare; it’s all about the taste here.

Coffees and teas and liqueur coffees are available as you would expect and some with twists.  I’d definitely like to try the Russian Coffee with Vodka or the Seville Coffee with Cointreau next time!

I enjoyed researching Marco Pierre White while preparing for this review.  Despite his always calm and cool appearance on the TV ads, he has a lot going on.  He has launched a new cookbook recently called Essentially Marco and he is opening a restaurant in Singapore next year.   His home just outside Bath is a world away from the Yorkshire council estate he grew up in.  “Can you imagine being on a council estate in the 60s called Marco Pierre?” I quote from a recent interview.

Despite its discreet outward appearance, the dining room also has a cocktail bar and a private dining room seating up to 20 people.  Private parties up to 100 people can be catered for here and it is worth noting that the restaurant also benefits from a late license until 2am on weekends for private events.  This Christmas, there are two new menus, at £35.00 and £55.00 per person, each showcasing traditional Christmas favourites as well as the Steakhouse staples.  For parties, there are also two carefully chosen, competitive Drinks Packages available, at £15.00 and £25.00 per person.  There is also a special New Year’s Eve Menu, priced at £49.50 per person.

For those of you struggling with presents, the London Steakhouse offer varied gift options including the Steak & Cocktail Meal for Two at £100.

On the website, I was delighted to find a selection of sauce recipes (very kind of them to share their intellectual property), cocktail instructions (which is worth a bookmark) and a subscription to their newsletter.

Even though we had lazily travelled here by tube, we were sure to walk back; a price worth paying for the evening’s pleasure!

There is booking online and OPENING TIMES are: