LSO Discovery, the London Symphony Orchestra’s award-winning community and music education programme, presents a number of events as part of the inaugural Family Arts Festival at the Barbican and LSO St Luke’s (the Orchestra’s music education centre) this October and November.

The Family Arts Festival, running from 18 October to 3 November 2013 and coinciding with the autumn academic half-term, is the first UK-wide festival designed specifically to increase intergenerational participation in, and engagement with, the arts. Leading arts venues and institutions, such as the Barbican where the London Symphony Orchestra is resident, will join together in a programme of theatre, dance, music, circus, visual art and more, building on the momentum of the London 2012 Festival and Cultural Olympiad. 400 events are already confirmed by venues across the UK, with over 1,000 events expected to be part of the programme by the opening of the Festival. 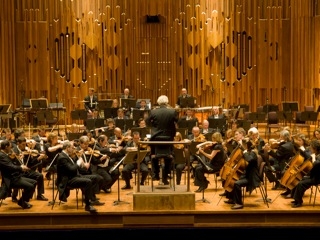 Kathryn McDowell, Managing Director of the London Symphony Orchestra and Family Arts Campaign Board Chair said: “I’m delighted that the LSO is joining the Family Arts Festival. The Orchestra has hugely-successful family concerts in its Barbican season every year, and has given well-received family concerts on tour around the world. Through the LSO Discovery programme the Orchestra reaches some 60,000 people a year of all ages and there is a clear desire from our audiences for this work which allows the LSO to be enjoyed across the generations.”

On Sunday 27 October, at 2.30pm in the Barbican Hall, the LSO Discovery Family Concert ‘Witches’ invites families with 7- to 12-year-olds to join Rachel Leach in exploring a Halloween-themed programme, including excerpts from Berlioz’s Symphonie fantastique, Saint-Saëns’ Danse Macabre and John Williams’ Harry Potter, conducted by Timothy Redmond. Pre-concert workshops in the foyers allow children to compose their own music with LSO musicians and create themed props.

Family Backstage Pass: Berlioz, on Thursday 31 October at 6pm, is a creative session on Berlioz’s Symphonie fantastique led by Rachel Leach for families with children over 12 in the Barbican’s Fountain Room. A full performance of the work follows the session in an all-Berlioz concert by the LSO and Valery Gergiev at 7.30pm in the main hall.

On Sunday 3 November there is an LSO Discovery Day on Hector Berlioz ideal for families with older teens studying music. The day includes access to the morning rehearsal of The Damnation of Faust with the LSO and Valery Gergiev in the Barbican Hall, a talk on the composer from a guest speaker and chamber music performed by LSO players at LSO St Luke’s.

The Family Arts Festival is the public-facing part of a wider programme, The Family Arts Campaign, of which Managing Director of the London Symphony Orchestra, Kathryn McDowell, is Board Chair. The campaign, a new initiative supported by Arts Council England and digital sponsor Mumsnet, aims to support arts organisations in providing high quality family-friendly events, and to promote best practice across the industry.

LSO Discovery, now in its 23rd year, sets the LSO apart from other orchestras by the depth of its commitment to music education. The award-winning programme reaches over 60,000 people a year, from babies to music students and adults. The home of LSO Discovery, LSO St Luke’s, is an 18th-century Grade 1-listed Hawksmoor church, restored to become a fully-accessible Centre that is now a hive of creative activity and community landmark.

The LSO’s concerts are accessible to all and the Orchestra’s fair pricing policy means that being a part of the LSO’s inspiring music-making is affordable. Some 24,000 seats in the LSO season are available for £10 or less, and any of our 100,000 concert seats are £5 or less for under-16s, allowing families on a budget to experience the LSO.