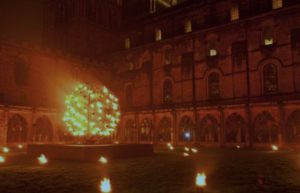 Three more London landmarks, a live digital broadcast presented by Lauren Laverne and a talks programme inspired by major themes across the festival have been announced as part of the event

The series of spectacular art events, which are all free to the public, will take place in key sites across the City, Southbank and Bankside from 30th August – 4th September, marking this momentous event in London’s history and addressing its contemporary resonance with themes including displacement, disaster and the resilience of the urban metropolis.

Artist Martin Firrell presents Fires of London, two new commissions either side of the River Thames. Fires Ancient will light up the south and east sides of the dome of St Paul’s Cathedral with a fiery projection echoing both the catastrophic impact of the Great Fire of London on the Cathedral itself and the birth of the building designed by Christopher Wren that emerged, phoenix like from the ashes. The projection will be visible from across the river and with a unique view from the terrace of One New Change. (Supported by Cheapside Business Alliance, RSA Insurance and Land Securities)

On the other side of the river, Firrell’s Fires Modern will be projected onto the flytower of the National Theatre’s (NT’s) iconic Grade II listed building. The projection of Firrell’s text and flames will reveal stories of resurgence and change that have shaped the UK’s capital city and created the open and diverse metropolis that we enjoy today. Projecting Fires Modern resonates with the National Theatre’s mission of making the very best theatre and sharing it with as many people as possible. Fires Modern will join a historically impactful series of artistic projects that have used the NT’s fly tower to reach as wide an audience as possible.

With views across to the City and St Paul’s Cathedral, French fire alchemists Compagnie Carabosse will create a Fire Garden, transforming the riverside area in front of Tate Modern into a crackling, spitting, afterdark adventure. (Supported by Aon)

Helen Marriage Director of Artichoke said: “LONDON’S BURNING brings a unique contemporary perspective to the Great Fire, exploring the challenges and issues faced by major world cities today, our relationship to catastrophe and crisis and our ability to adapt, adjust and rebuild. It is an artistic response that addresses the impact of the Great Fire of London on the City, its inhabitants and buildings, and how it emerged from the ashes and evolved to the resilient world city it is today”.

In addition to the live festival programme, Artichoke has been commissioned by The Space to produce a live digital broadcast of the spectacular finale event, London 1666. An extraordinary 120 metre long sculpture of the 17th century London skyline will appear on the River Thames and burn, in a dramatic retelling of the story of the Great Fire of London of September 1666. A collaboration between American ‘burn’ artist David Best and Artichoke, the project has involved months of work and participation with local schools and young Londoners.

The broadcast will be hosted by Lauren Laverne from 8.25pm on Sunday September 4th , and will include key guests and a series of short films revealing the stories behind the project. The event will be filmed using state of the art equipment and techniques to capture a Multicamera live experience, directed by Tim van Someren, who created the London 2012 Olympic Opening Ceremony. The programme will give online audiences front row, immersive access and a memory that will burn bright long after the fire has died.

A talks programme will accompany the London’s Burning artistic programme exploring how cities past and present have responded to crisis. It will include an exclusive poetry reading by actor Simon Callow at the top of The Monument, and The Great Fire in Three and a Half Pints, a series of three guided walking tours, including a spinetingling tour of the City’s streets led by psychiatrist Joanna Moncrieff , each tour stopping off at historic Fuller’s pubs along the way.

Elsewhere in the programme speakers include London’s highest ranking female Fire Fighter, Becci Bryant , and authors Suzanne O’Sullivan and Andrew Mitchell Hurley , whose talks will explore historical and contemporary themes including our fascination with fire, the language of crisis, the part art can play in solutions to crisis, responses to world trauma and the psychology of fear.

○ The City From Above: Looking Down at the Great Fire

An intimate history of the Monument and the Great Fire, led by author Matt Brown and culminating in a poetry reading by actor Simon Callow 62 metres above ground.

From public memorials to art installations, join Early Morning Opera’s Artistic Director Lars Jan and the Director of Artichoke, Helen Marriage, for a discussion about how art can respond to the issues impacting our world today.

Five speakers, fifteen minutes each. One Great Fire of London, hundreds of years of history.

This talk examines how disasters are reported across the globe, the rhetoric used to discuss catastrophe, and the psychology of crisis.

○ Fear: From Neuroscience to Novels

Awardwinning neurologist Suzanne O’Sullivan and author of The Loney,Andrew Michael Hurley, will discuss the construction of fear and its manifestation in our daily routines.

○ The Great Fire in Three and a Half pints – three walking and drinking tours:

~ A Fire Walk Into A Pub with Pete Brown.

~ Crime and Punishment with Joanna Moncrieff. A spinetingling journey into the City’s murderous backstreets

~ A London Obsession with Peter Berthoud. A historically fascinating jaunt through the City’s past

In addition, BBC Radio 4 will be marking the Great Fire anniversary with a series of programmes including Cities from the Ashes , presented by Sir Nicholas Kenyon, 30th August, Great Fire 350 , which charts the making of Artichoke’s London’s Burning festival, 3rd September; and Pepys After the Fire, 5th- 9 th September.

Joyce Wilson, London Area Director, Arts Council England, said: “We’re delighted to be able to acknowledge Artichoke’s ambitions for excellence by funding this project. It will bring the city together around a piece of incredible art, and in commemoration of a significant moment in its history. LONDON 1666 is a great opportunity to put the creativity of young people at the heart of a high profile historic event with national appeal.”

The Mayor of London, Sadiq Khan, said: “The Great Fire of London was one of the most important moments in the history of the capital. The range of fantastic events taking place around its 350th anniversary shows once again that London is open to visitors from around the world.”