A number of Barbican residents, and presumably also those who work in and around the diamond district, speak highly of Fabrizio restaurant on St Cross Street, just off Leather Lane, a small, unpretentious family owned establishment which offers excellent Mediterranean-influenced food at reasonable prices and seems decently busy at lunchtime and in the evenings. It also seems to attract very complimentary reviews from the main London restaurant websites and papers like the Evening Standard as well as from individual diners. Now Fabrizio Zafarana, the eponymous owner/chef, has launched out and opened a second restaurant called Luce e Limoni in the stretch of Gray’s Inn Road just to the north of Clerkenwell Road, and in keeping with his Sicilian heritage the new venue specialises in Sicilian cooking – even more so than his original. 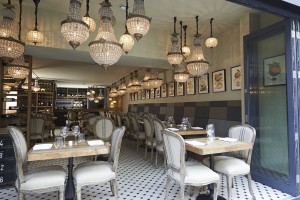 Indeed the new restaurant is very much an homage to Fabrizio’s roots. As he puts it: “Our food is the story of a long trip which changes over time, but with one common point: the tradition. In Sicily, trade brought hundreds of years of foreign influence, which we try to bring in our restaurant by offering revisited traditional dishes giving fresh sensations to our customers.”
Those heading to Luce e Limoni (light and lemons to summon up a vision of Sicily in the name) and looking for the dishes one normally gets at Italian restaurants might be disappointed – but not for long as the Sicilian take on food rivals that of any other region of Italy.
We ate there at lunchtime on one of those hot, sultry days we were blessed, or cursed, with in July and the fact that the whole frontage of the restaurant can be opened out onto the fairly busy street was a positive – giving the feeling of alfresco eating, but indoors. While Fabrizio himself apparently usually oversees his initial restaurant, but pays regular visits to the new one to make sure everything is to his satisfaction, Luce e Limoni is largely managed by his charming wife, Rebeca. Our waitress was attentive and extremely helpful – I let her choose my wine by the glass, given I don’t know a great deal about Sicilian wines, and her selection was perfect for the dishes we had.
The light and lemons theme is emphasised in the décor of the restaurant which is a perhaps less stark than Fabrizio’s original. Comfortable seating, wooden tables attractive lighting, plenty of pictures of lemons!
While there is an excellent selection of pastas and risottos, these differ very much from the almost standard ones one finds in most Italian restaurants – with a focus perhaps on seafood oriented dishes, a focus which also extends to the main courses on offer too, although there are also some excellent meat choices. There is a good selection of starters and we began with a shared fritto misto with bottarga mayonnaise– large and small prawns, squid, baby octopus, grilled sardines – stronger tasting than expected perhaps, but far from the tasteless rubbery stuff that is sometimes served under this name elsewhere. Other options could have been seared scallops, prawns carpaccio, tuna prosciutto, baked mackerel timbale, mozzarella with Sicilian caponata, Sicilian bean soup with spicy squid. Starter prices range from £6.95 (the soup) up to £11.50 (the prawns) with most in the £9-11 range.
For the main course my companion had one of the pasta dishes, Bucatini with sardines, sun dried tomato, capers, sultanas and toasted breadcrumbs which she pronounced superb, while I had roasted rabbit legs stuffed with mushroom paté and wrapped in speck, with mashed celeriac and wilted french beans – served beautifully. Rabbit, which can be tough and dry was really tender, and well complemented by the celeriac mash and the beans were cooked perfectly. But there were a number of other main dishes which also really appealed – veal T-bone, pork belly, rump of lamb, tuna, swordfish, amberjack, sea bream – all cooked Sicilian style. Prices for the meat and fish dishes were mostly in the £14-15 range with the veal T-bone at £17.50. Pastas again were varied, but with the Sicilian theme – if you want to splash out on a pasta dish there was a half lobster spaghetti with toasted sesame seeds, brandy and cherry tomatoes at£15.95 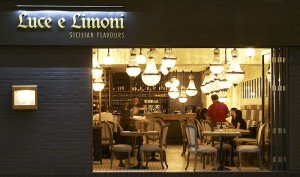 We forewent desserts – but settled for coffee for me (really good strong coffee) and herbal tea for my dining companion. To be honest, the desserts didn’t look that exciting although I’m sure they were fine – basically mostly Sicilian takes on normal Italian sweets – semifreddo, cassata, cannoli, tiramisu etc.
The wine list is primarily Sicilian – thus from an island which produces excellent reds and whites, but there is also a selection of well known mainland and Sardinian Italian bottles. Several are available by the glass which more and more I tend to go with nowadays as a full bottle between two won’t necessarily complement conflicting dishes, while two bottles might seem excessive! Bottles run from about £17.95 so is perhaps a shade more expensive than at Fabrizios.
All in all a great little restaurant offering interesting and very tasty food, a nice ambience, good service – and it won’t break the bank. For Fabrizio’s aficionados definitely one to try out. A little more costly perhaps – say around £30-40 a head for three courses without drinks or service, but good value by area standards. Certanly one to go back to again – there are so many unusual and interesting dishes to sample.
Luce e Limoni is at 91-93 Grays Inn Road, WC1X 8TX. Call 02072423382 for reservations.