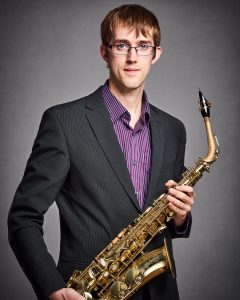 Classical saxophonist Alastair Penman, a 2013 CMF artist, performs at 1pm at The Great Hall, Barts Heritage with pianist Jonathan Pease. This concert has been changed to an online-only event and will be broadcast live from St Bart’s Great Hall.

The next in our 2021 community concert series will be a performance from CMF Alumni, classical saxophonist Alastair Penman.

Hailed as a “pioneering instrumentalist and writer” and praised for his “surpassingly beautiful music” and “undoubtedly brilliant mind”, British saxophonist Alastair Penman is a dynamic and versatile performer and composer, presenting contemporary music in new and exciting ways. Having earned masters’ degrees in both Information and Computer Engineering (University of Cambridge) and Saxophone Performance (Royal Northern College of Music), Alastair has a strong interest in the fusion of live saxophone performance with electronic effects, backings, and enhancements to create often previously undiscovered sound-worlds.

Although classically trained, Alastair enjoys exploring many musical worlds; such influences can be heard in his compositions and performances, which often transcend genre definition.

As a soloist, Alastair has performed at venues including St Martin-in-the-Fields, St John’s Smith Square, Milton Court and Trinity College Chapel. He has been a guest recitalist at the RNCM and Canterbury Christ Church University Saxophone Days, and at the 2017 European Saxophone Congress and 2018 World Saxophone Congress, presenting material from his album, Electric Dawn (Sospiro Records), which has also received airplay on BBC Radio 3. In 2019 Alastair was a guest performer at the first international SABRE Day, at the University of the Arts in Zurich, Switzerland.

In an ensemble setting Alastair leads the award-winning Borealis Saxophone Quartet, with whom he has given numerous live performances on BBC Radio 3, and he also plays baritone saxophone with the Kaleidoscope Saxophone Quartet. Alastair has performed with the Philharmonia Orchestra, London Contemporary Orchestra and Royal Ballet Sinfonia and has appeared with jazz groups at Montreux and London Jazz Festivals as well as at jazz clubs across Europe.

As a composer, Alastair has been commissioned by organisations including Park Lane Group, RVW Trust and City Music Foundation, and his compositions can be heard on commercially available recordings. Alastair’s works have been performed extensively in the UK, and have also received performances in Europe, North and South America, Africa and Australasia. Over a dozen of Alastair’s compositions are published by Saxtet Publications, and many more are self-published.

As an educator, Alastair is a Visiting Professor at the Guildhall School of Music and Drama and a regular tutor at Benslow Music. Alastair has been a guest tutor for the National Youth Wind Orchestra of Great Britain and has taught students for University of Cambridge and University of Liverpool. Internationally, Alastair has given masterclasses at UCLA and Cal State Fullerton (USA) and in the UK at the Guildhall School of Music and Drama, Trinity Laban Conservatoire and Royal Welsh College of Music and Drama. Alastair acted as editor, notation specialist, and model for John Harle’s seminal book The Saxophone (Faber Music). Alastair maintains a YouTube Channel, Saxophone Resources, which contains educational resources and receives over 40,000 views each month (and has exceeded 2 million total views).