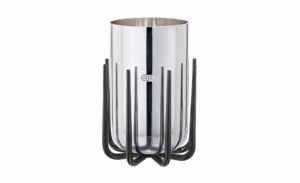 Explore the evolution of silver tableware and dining conventions from the 1600 to today through the world-renowned silver collection of the Goldsmiths’ Company.

Made for the Table explores the evolution of silver tableware. Exquisite exhibits made by silversmiths over the last five centuries are brought together, to consider the influence of function on design.

From candlesticks and cutlery to serving dishes, silver tableware has been the focal point of table settings for more than 500 years. These decorative yet functional objects traditionally denote status and continue to add stylish accents in a contemporary setting. Today, despite vast changes in taste and style, the UK’s leading contemporary silversmiths are still inspired to make extraordinary handmade objects for the table.

This touring exhibition presents a bespoke table, laid with hand-crafted silver objects, modern glass, ceramics and textiles by leading UK artisans. The table is shown with historic examples of tableware from the Goldsmiths’ Company Collection. One such piece, only on show at the Goldsmiths’ Centre, is a silver tankard marked with ‘pegs’ on the inside (Joannes Reimers, c.1658). The term ‘peg’ probably derives from the Danish measure ‘paegl’, roughly equivalent to a pint. The tankard would be passed around during a drinking game; the aim being to drink down to the next peg, hence the phrase ‘take you down a peg or two’.

The display is accompanied by visual and audio interpretation curated by AVM Curiosities, including a series of photographs produced in collaboration with Rosalind Atkinson, which were inspired by 17th century still-life paintings, and an ambient soundscape by Ysanne Spevack aka Mee, best known for her work with the Smashing Pumpkins. The soundscape titled ’Silverware 7′ vividly brings to life the making process using silverware as the percussion, alongside atmospheric sounds from the forges of master silversmiths Miriam Hanid and Rebecca De Quin.

The exhibition is accompanied by a programme of events, including cream teas, talks and object handling opportunities.