Mark Hix in praise of oysters

Mark Hix in praise of oysters

Time flies when you’re having fun and this April it’s the HIX Oyster & Chop House 10th anniversary. When I broke away from the Caprice group after 18 years of second-to-none experience and working with some great people in the industry some of which are still there now including Tim Hughes and Jesus Adorno-s. The Oyster & Chop House was a small restaurant compared to Scott’s, J Sheekey, The Ivy and Le Caprice, but for your first site on your own it fitted perfectly in the heart of Smithfield. 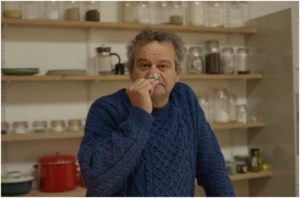 We opened in times when serving meat on the bone was a tad controversial with BSE – and oyster restaurants were few and far. But we have stayed true to our beliefs and lots of interesting cuts of meat on the bone appear on the menu throughout the seasons alongside both native (when in season) and rock oysters from the best farmers on our British coastlines. It’s interesting, since we opened back then, how many customers have a genuine passion for oysters and their nutritional and health values. Oysters are so versatile and can be enjoyed in their raw state. I like to leave natives alone and encourage customers to avoid the temptation of shallot vinegar and lemon. Deep-fried rock oysters are a popular one as is our classic Steak & Oyster Pie which is a day-one staple on the menu.

We will obviously be having a little celebration along with the producers that I have worked with since the beginning – showcasing British asparagus, oysters, steaks and chops and cider. Pop along on Saturday 28th April for our free food festival and try the best of British seasonal food. If you miss that, we will be serving feasts for two to share throughout the month celebrating some of the all-time favourites that have regularly appeared on the menu since 2008.

Pies are a great way to use the less expensive, yet full-flavoured meat cuts, such as flank and shin of beef, mutton shoulder and neck, and ox cheeks. Tucking in a few oysters adds a touch of luxury.

For the parsley crust

A generous knob of butter
2 tbsp fresh white breadcrumbs
1 tbsp chopped flat-leaf parsley
Cut the meat roughly into 3cm cubes. Season half of the flour with salt and pepper and use to lightly flour the meat. Heat a little oil in a large, heavy-based frying pan and fry the meat in 2 or 3 batches over a high heat until nicely browned. Set aside on a plate.

Melt the butter in a large, heavy-based pan or flameproof casserole and fry the onion and garlic for a few minutes until lightly coloured. Add the remaining flour and tomato puree. Stir over a low heat for a minute or so, then slowly add the ale and stock, stirring to avoid lumps from forming.

Add the beef with the thyme and bay leaf. Bring back to a simmer, cover and simmer very gently (ideally using a heat-diffuser mat or a simmer plate) for about 2 hours until the meat is tender. When the meat is cooked, the sauce should have thickened to a gravy-like consistency. If not, mix the cornflour to a paste with 1 tbsp water, stir into the sauce and simmer, stirring, for a few minutes. Leave to cool.

To make the pastry, mix the flour, salt, suet and butter together in a large bowl and make a well in the centre. Mix in enough water (about 150ml) to form a smooth dough and knead for a minute.

Spoon the cooled filling into 4 individual pie dishes (or 1 large dish) to about 1cm from the rim. Roll the pastry out on a floured surface to a 7-8mm thickness. Cut out 4 discs to make pie lids (or one large lid for a big pie), about 2cm larger all the way around the pie dish(es). Brush the edges of the pastry with a little of the beaten egg.

Lay the pastry over the filling, pressing the egg-washed sides onto the rim of the dish(es). Cut a 2cm circle in the centre but leave in position on top of the pie(s). Let rest in a cool place for 30 minutes.

Preheat the oven to 200C/gas mark 6. Brush the pie(s) with beaten egg and bake for 30-35 minutes (or 40-50 minutes for a large one) until the pastry is golden. Meanwhile, for the parsley crust, melt the butter in a pan, mix in the breadcrumbs and parsley, and season with salt and pepper.

Once the pie(s) are ready, remove the pastry circle(s) in the centre and pop in the shucked oysters. Return to the oven for 10 minutes. In the meantime, heat the grill. Scatter the parsley crust over the oysters in their half-shell and grill until golden.  Place over the hole in the pie and serve.