Not sure about christening an eating establishment Bad Egg, but that is the name of the new restaurant which has sprung up next to Wagamamas in City Point the big office complex by Moorgate Station.  This makes it perhaps the nearest eating place to residents of Willoughby House. 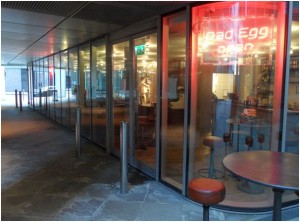 The new restaurant is a set up to be a modern take on the Chicago diner, and is brought to us by Neil Rankin and Noble Inns.  Inspired by contemporary Chicago diners and featuring an eclectic all-day menu with bold flavours from around the globe, Bad Egg is acclaimed chef Neil Rankin’s take on the all-American dining scene. Open from 8am for breakfast Monday to Friday, Bad Egg serves tacos, ribs, burgers and a large variety of egg dishes throughout the day.  It is also now open for brunch on Saturdays.

The name of the restaurant is said to be playful (and hopefully not descriptive), and whilst eggs feature heavily on the menu, the real emphasis is on the global flavour combinations, quality ingredients and expert preparation and cooking. Mexican, Korean, Indian, Middle Eastern and Malaysian flavours all play integral roles throughout the menu, whilst the cooking techniques used to create each dish are of the high standards expected from head chef Daniel Merry and Neil Rankin –

“I took my inspiration from the Chicago diner and emerging fusion scene, but it is unlike anything that is around here in the UK or in the US. There is some downright dirty food on the menu but also a nod towards balanced eating. I’m not saying it’s healthy but you can eat healthily if you like!” says Rankin.

Following the principles of the Noble Inns group’s Pig and Butcher and Smokehouse, all ingredients are ethically sourced from small local suppliers and treated with care and attention to detail. Thoughtful design, subtle lighting and lively music combine, the Group says, to create a relaxed and fun environment.