Over lockdown, the City’s streets have been pleasantly pre-Big-Bang quiet but let’s enjoy this moment to contrast that with our newly energised Barbican Estate neighbourhood.  We are seeing and sharing more with our neighbours now than ever.  I don’t mean to knock the old guard here; we know that we have a very solid group of generous volunteers who represent us on Barbican related committees so we can hold our own with developers and the City.  I’ve been here for 30+ years, though, and I’ve never seen such a huge new wave of altruism and neighbourliness.  Where our young professionals don’t often have the time to give, they are making up for that now!

The ‘call to arms’ had only been seeded for a few minutes, and volunteers joined WhatsApp groups en masse.  Already, each House had organised in their own way – posting leaflets and letters to Residents with support numbers to contact for help and errands – and so an efficient reporting and facilitating network was configured and operational within hours.

Fast forward a couple of days later and a spare cell phone and sim had been donated and we had achieved the golden triangle of central support number, an email and a website.  Since then, a small group of the volunteers circulate the phone and the system seems to be working well.  Residents tend to contact their local House volunteers first, but if they have any problems, then they have the emergency volunteer phone number to fall back on. The number is 07376 068137 (for you to keep handy).

The BEO and the City hooked into the volunteer group, too, and we fully expect that this new support blanket will be there for some time.  Bravo to ALL!

The new Square Mile Food Bank is also thriving thanks to a group of Barbican and Golden Lane Residents.  Regular donation and distribution points have been established now and collection times are: Monday, Wednesday, Friday (10-11am) and Fridays (6-7pm) outside Lauderdale Tower and the Lilac Room and Saturdays (5-6pm) at the Golden Lane Community Centre on Fann St.  Financial donations can be made to their Go Fund Me account at https://www.gofundme.com/f/square-mile-food-bank and you can reach them at SquareMileFoodBank@gmail.com or or 020 3488 5191.

Online learning curves have been the order of the day for many during lockdown and with theatres unlikely to reopen any time soon, our Theatre reviewer Gary Donaldson is pointing us to his blog at unrestrictedtheatre.co.uk where you can watch shows online.  Just search for ‘watch now’ on his site for a list of currently available shows.

Welcoming new life to our Community over the past few months has been fantastic, but this issue we also say goodbye to three very special Shakespeare Residents, Gerald Hines, and June and Vic Giles, who were part of the fabric of the neighbourhood and will be greatly missed.

‘The greatness of a community is most accurately measured by the compassionate actions of its members’ Coretta Scott King.

VE Day was a quieter affair this year so before I sign off, I’d like to give a loud ‘shout out’ to Mr Muggleton who has just turned 95 in May and lived most of his life in the East End of London, experiencing the Blitz on the Isle of Dogs.  He and his wife among the first to take up residence in Ben Jonson House in the 70s, and he still takes his regular walks around the Estate.  At 19, he took part in the D-Day landings, being a Coxswain on one of the landing craft, landing with the Canadians. He was awarded the Legion de Honour by the French Government for his participation in these events and during the celebrations last year at Portsmouth, he met with Prince Charles and President Trump.  Although we couldn’t celebrate the same way this year, thank you Mr Muggleton! 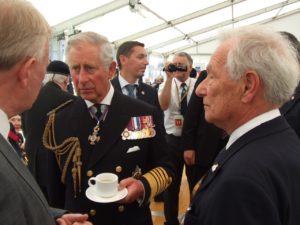 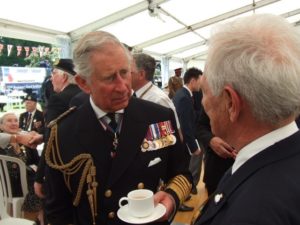