Murphia Games at the Jugged Hare – the excellent reality

Murphia Games at the Jugged Hare – the excellent reality

We published a preliminary intro to the ETM Group’s Jugged Hare’s Murphia Games gourmet game dinner last week (See: Murphia Games highlights Jugged Hare game offerings) and can report that it comfortably lived up to the promotional hype with some brilliant food offerings, and wine pairings.  Altogether diners were treated to five courses, all from different. mostly Irish, chefs working in London.  Some of the dishes served were thankfully just tasters, otherwise the volume of food would have been far too great.

On the basis of this event, and assuming other offerings in the series of gourmet game evenings are of similar quality in terms of food and ambience, we can strongly recommend them.  The next gourmet game evening in the series provides two chances to partake in the extremely popular Game and Bordeaux gourmet dinners taking place at the restaurant on the 20th and 21st of November.  Back by popular demand, the Game and Bordeaux evening is always oversubscribed. So once again there will be two dinners to ensure diners get a chance to enjoy what the restaurant describes as the perfect combination of these flavours. 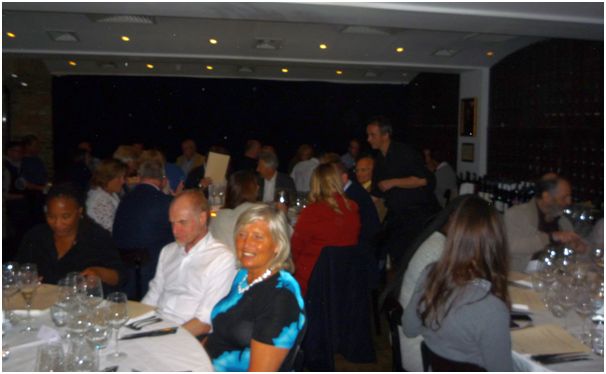 The Murphia Games event took place in the restaurant’s good sized basement function area so as not to interfere with the ever-popular main ground floor restaurant, which was already busy when we arrived at around 7 pm.  There were 5 round tables with just over 50 diners partaking and the event was compered by the Jugged Hare’s Assistant Manager who introduced each of the chefs and also provided information throughout on the wines being paired with each course.

The chefs all gave a short individual presentation on the dishes they had prepared and the meal kicked off from there, with the small taster first course from chef Ana Haugh of wild venison and cep purée – actually to the writer’s taste buds one of the highlights of the evening – but so saying all the courses were excellent.  It was paired also with a great tasting New Zealand Albariňo wine – highly recommended too. 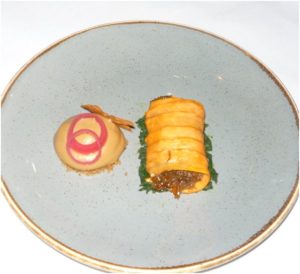 This was soon followed with Hare Pithivier from chef Marguerite Keogh, another good taster course, paired with a French Herault merlot wine. 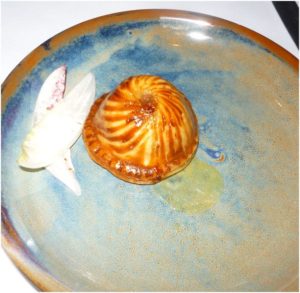 And then on to the main course – Roast breast of Yorkshire Grouse, served with fermented parsnip gratin, beets, poached pear and grain granola.  A great combination from chef Richard O’Connell who was the launch chef for the Jugged Hare and its sister restaurant, Chiswell Street Dining Rooms at the other end of the Montcalm City hotel.  Richard is now working as a restaurant consultant.  The dish was paired with a red Sancerre from the Loire region of France – another good combination. 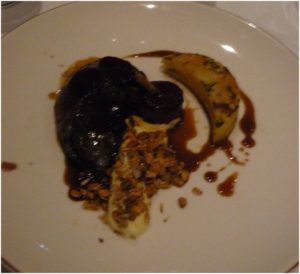 These three courses were followed by a dessert and a savoury.  The dessert came from Chef Kevin Burke and was a duck Fat Treacle Tart with a sheep’s milk ice cream.  Unlike some treacle tarts this was exceptional in that it wasn’t too sweet and sickly – and neither was the ice cream.  This was paired with a truly excellent Hungarian Tokay dessert wine. 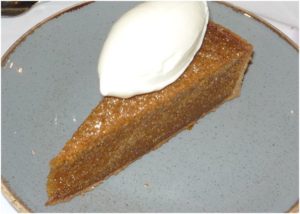 The final dish was from chef Rafael Liuth and, again to the writer’s palate another of the event’s highlights.  It was a Bosworth Ash goats cheese mousse served with damson and ratafia chutney and yarrow leaves.  The writer does not usually like chutney with cheese, but this combination was exceptional.  Rafael is not Irish, but Italian (perhaps honorary Irish for the occasion) but has been with the ETM group for a number of years – initially at Chiswell Street Dining Rooms.  This exceptional semi-savoury dish was paired with an Australian Shiraz from Rum Jungle – another great combination. 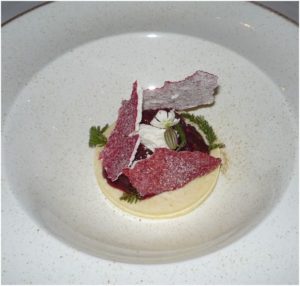 Altogether this Murphia Games gourmet game dinner was excellent and is thoroughly recommended should it be repeated again next year.