One of the closest restaurants to the Barbican is the Jugged Hare on the corner of Chiswell Street and Silk Street, and almost just across the road from Cromwell Tower and the eastern end of Ben Jonson House.  This is technically a gastropub, attached to the 5*Montcalm Hotel which occupies a part of the old Whitbread Brewery site. 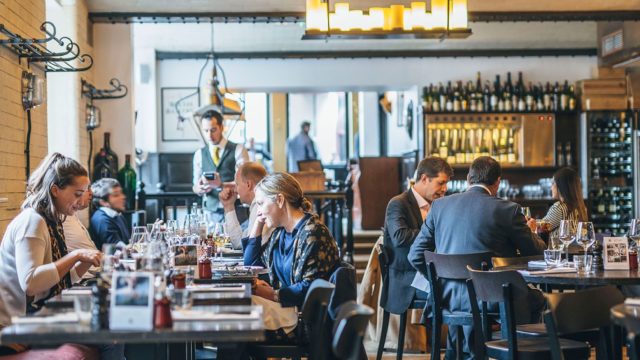 The Jugged Hare has gained quite a reputation for serving excellent quality food and wine and is consequently very well frequented so it is advisable to book ahead for lunch and dinner.  As the name might suggest, it specialises in game dishes in season and claims to be the best game restaurant in London.  Its Murphia Games event, emphasises this point.  This year’s event will be held on October 2nd  with tickets at £85 a head

The Murphia Games is the latest in The Jugged Hare’s infamous gourmet dinner series during this year’s game season.  Itwill incorporate top game dishes from some of Ireland’s most celebrated chefs currently working in London. Each of them made it on to the prestigious Hot Dinners Murphia List for 2019 – which showcases the best Irish talent in London’s food and drink circles.

They were specially selected to come together and create 4 of what they reckon to be the best game dishes for diners with accompanying wines paired by the Jugged Hare’s expert sommelier. Note that one of the chefs taking part was a key participant in the start-up of both Chiswell Street Dining Rooms and the Jugged Hare back in 2011.

The Line Up of Irish Chefs

Marguerite Keogh from The Five Fields:  County Clare born and bred (she goes home EVERY month) Marguerite Keogh apprenticed at Dromoland Castle hotel before skipping over to London. For five years she worked alongside Marcus Wareing – first at Petrus and then at Marcus Wareing at the Berkeley before launching The Five Fields in Chelsea with Taylor Bonnyman and quickly gaining a Michelin star.

Richard O Connell of Seasoned Consultancy:  Born in Limerick and trained in Galway, Richard has worked on the London food scene for 27 years, starting at The Landmark under Andrew McLeish. He launched both Chiswell Street Dining Rooms and The Jugged Hare in the City and for the past few years has been Executive Chef at Tom’s Kitchen. Now he’s branching out on his own, offering advice to those in the industry through his Seasoned Consultancy.

Kevin Burke of The Ninth:  Born in Dublin, Kevin trained at Dublin’s Patrick Guilbaud’s before moving to London and starting at Pollen Street Social and afterwards at Jun Tanaka’s The Ninth as Sous Chef. He’s been there since the launch, while it earned its Michelin Star and is now the Head Chef.

Ana Haugh of Myrtle:  Dublin-born Anna started her restaurant career in that city’s famous L’Écrivain restaurant before heading to London where her bosses included everyone from Shane Osborn and Philip Howard to Gordon Ramsay. Most recently she was Executive Chef at Bob Bob Ricard before leaving to work on her own restaurant. Myrtle opened in Chelsea in May and while the food may not be Irish, per se, much of the produce will be.