Chophouse and steak favourite Blacklock, has confirmed its much anticipated third restaurant will open in Shoreditch on Rivington Street on Monday 8 October. It has been running a soft opening this week to iron out potential problems.

Blacklock opened its first restaurant in an old basement brothel on Great Windmill Street in Soho in 2015. Set up by Gordon Ker, Blacklock reckons it offers incredible quality meat and drinks at unbeatable prices with an obsessive focus on passionate service from a team that genuinely care. Working with the best suppliers around, including Phillip Warren Farmers, Blacklock says it is the place for the very best chops, steaks and other meaty treats, a Sunday Roast that’s almost as good as Mum’s, all washed down with cocktails for a fiver and litres of wine on tap.

The second restaurant, Blacklock City, opened in 2017 and the latest member of the family, Blacklock Shoreditch on
Rivington Street officially opens on Monday next week. 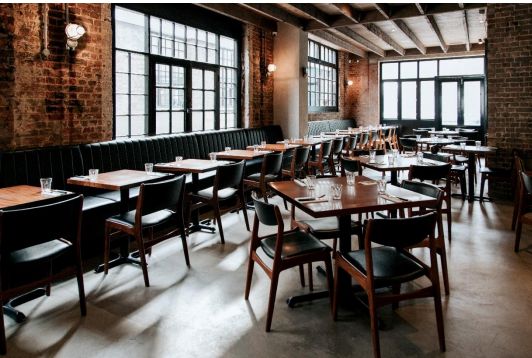 Setting up shop in a former Victorian warehouse that first housed one of East London’s finest furniture makers and then the popular Rivington Grill, the 95 cover restaurant will do what they do best – serve the highest quality meat this country has to offer for a claimed snip of the price elsewhere.

The restaurant will open for lunch and dinner and, for the first time, Gordon and the Blacklock team will introduce a dedicated bar area. Open late into the evening, it will seat up to 30 with a brand-new drinking food menu including Yorkshire puddings with black pudding and gravy, Welsh Rarebit nuggets and Lamb scratchings.

And that’s not all as the team have been working in close cahoots with their friends over the pond at Slowly Shirley, the renowned New York cocktail bar, who will be collaborating on a bespoke cocktail list – exclusively on offer at Black lock’s Shoreditch esablishment.

With cocktails starting at just a fiver, top-notch wines flowing on tap and a number of draught beers – a night at Blacklock won’t ever break the bank. Ask to be visited by the cocktail trolley to really go to town!

As usual, the restaurant menu will focus on the very best grass fed meat in the country from their awardwinning Cornish farmer and butcher Philip Warren, all cooked over charcoal with a little help from the restaurant’s namesake, a vintage Blacklock Foundry iron. With the usual favourites chops, steaks and other meaty treats for unbeatable value and mouthwatering sides including the celebrated 10 hour ash roasted sweet potato and Barbecued Baby Gems with Anchovy Dripping, you won’t leave hungry…especially if you fill up on cheesecake!

Sunday Roast fans rejoice (given the two month waiting list for a lunch spot at Blacklock’s Soho restaurant), the signature and OFM award-winning Blacklock Sunday Lunch will be heading East. Choosing between 55-Day Aged Beef Rump, Cornish Lamb Leg or Middlewhite Pork Loin (served with all the trimmings, including Blacklock’s infamous bone marrow gravy) is always tough, so why not go ‘all in’ and try them all for just £20 a head.

Blacklock Shoreditch is the third Blacklock restaurant to open following Blacklock Soho on Great Windmill Street in 2015 and Blacklock City on Philpot Lane in 2017.

Gordon Ker, Founder of Blacklock said: “We’re really excited to bring Blacklock to Shoreditch in such an iconic East London spot. The building is a former warehouse that is full of character and right up our street so we jumped at the chance. We’ve wanted to focus on the bar and food that goes well after a few drinks for a while but have never had the space and with Shoreditch it felt like the right time. It’s always important to us to add something special to the area so it’s great to be collaborating with the guys at Slowly Shirley who have some of the best international mixologists out there to bring something new to Blacklock and to Shoreditch.”