New glass globe welcomes you to the Charterhouse

New glass globe welcomes you to the Charterhouse 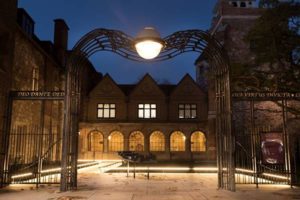 Entrance to the Charterhouse (photograph by Mark Mercer)

As you may know, as a local, The Charterhouse opened its garden square and a new museum early in 2017.

A reminder of the fascinating history of the place… set in the heart of Clerkenwell, the Charterhouse has been living the Nation’s history since 1348. Initially a Black Death burial ground, the site became home to the largest Carthusian monastery in the world until it was brutally dissolved in 1537 when 16 monks became proto-martyrs of the Reformation.

A grand Tudor mansion replaced the monastery. Elizabeth I spent the first days of her reign at the Charterhouse and James I (of England) created 133 Barons in the Great Chamber prior to his coronation.

In 1611 Thomas Sutton acquired the mansion and site to house his new Charity, an almshouse and school. The school separated and moved out of London in 1872 but the almshouse thrives to this day amidst the medieval, Tudor, Jacobean and later architecture that makes the site so fascinating.

The Charterhouse, the seven-acre heritage site and almshouse in Clerkenwell EC1, is delighted to announce that the final element of the new entrance to the Charterhouse, designed by Eric Parry Architects, is now in place.  The entrance, which was unveiled in January 2017, was a key element of the “Revealing the Charterhouse” project which saw the site opening its doors formally to the public. The large bespoke gas-light, which will run on the same timer as the gas lights in Charterhouse Square, adds the final element to the welcome at the gates.

The light – which has a multiple-mantle housing 16 gas flames – is set in the centre of the cold forged steel canopy, and its contemporary design compliments the extraordinary architecture of the estate.  The canopy features interwoven metal strands symbolising continuity, community and the overlap of the centuries – all key to the history and life of the Charterhouse.  When illuminated, the light, which is 600mm in diameter with a vitreous enamel crown and clear glass globe, lights up the brass plan of the original monastery set into the Scoutmoor York stone paving below, and catches the gilded coats of arms and lettering on the main gates.

Dominic Tickell, Development Director at the Charterhouse and driver behind the Revealing the Charterhouse project, says, “The new light is the focal point of the entrance way and with it now in place the public entrance to the Charterhouse is announced from across the square. The design was a feat of engineering to ensure the right materials and the right effect of the light in the space.  It is exciting to see it both in daylight, and when it is illuminated at night.”

The light was designed by Eric Parry RA, and made by Sugg Lighting, and the metalwork of the canopy was created by Chris Brammall Metalwork Ltd.   Artist Blacksmith Chris Brammall is one of the leading architectural and sculptural metalworkers in Great Britain.  It is believed that the last time a 16 mantel gas light to be designed and commissioned was by Sir Aston Webb for Horse Guards Parade in the early 1900s.

The ‘Revealing the Charterhouse’ project included a new museum and learning centre which have now been open for 17 months and have welcomed thousands of visitors, who had never known about the Charterhouse, or what lay behind the mysterious walls between Barbican and Farringdon.