When a new restaurant is launched management has an invidious task – it wants to generate publicity as quickly as possible, but this may not be at a time when everything has yet settled down.  Oblix was the first of the Shard’s current three restaurants to open, back at the end of May, and was obviously keen to generate coverage as quickly as possible, perhaps before its two competitors in the building had opened – the result being a couple of unfortunately far from impressive reviews from some well known restaurant critics, mostly complaining about service and perhaps, rather unfairly about the type of cuisine on offer.

Contrast this though with reviews from real people as well as from some other professional reviewers as the restaurant got into its stride, and one gets a rather different picture.  These real person reviews paint Oblix in a distinctly positive light.  Indeed service and cuisine both seem to come in for high praise – a picture very much confirmed on our visit.  Either some of the high-end restaurant critics are out of touch with what the public actually wants, or more likely the restaurant was a little slow to reach full efficiency.  It had been open around three months when we ate there and things did indeed seem to be working smoothly and our impression of food and service was good – and it offers the same fantastic views as its two rival Shard restaurants, Aqua and Hutong. 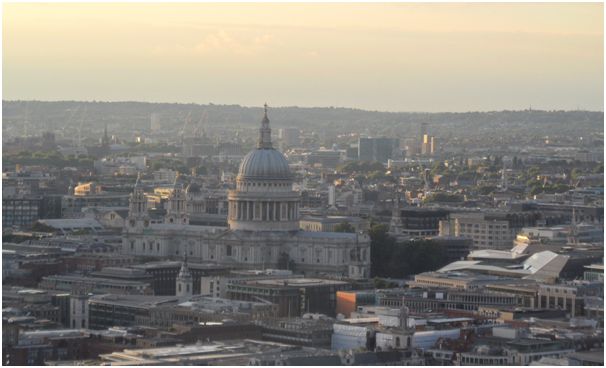 Evening view of St Paul’s from our table at Oblix

Oblix is the brainchild of restaurateur Rainer Becker, whose London restaurants comprise the Japanese themed Zuma, Roka and the Shochu Lounge.  Becker chose Fabien Beaufour from Eleven Madison Park in New York to head up the kitchen, while Becker references the New York rooftop views and New York grill menus, coupled with upscale and sophisticated urban dining as his inspiration for Oblix – but luckily not the standard $195 per head (around £125) menu cost at the New York establishment!  Oblix may be pricey, but not quite in the New York league!

Oblix takes up the whole of the Shard’s 32nd floor and offers a separated restaurant and bar lounge designed by Claudio Silvestrin. The restaurant is open during traditional lunch and dinner hours, whilst the bar area offers a deli option at lunch time, the standard dinner menu in the evenings and brunch at the weekends. Live music also features in the bar. The restaurant was full throughout our visit – perhaps a little noisy, but that is in part a function of its popularity with the public.  The bar was also very busy and when we left at about 9.15 pm things just seemed to be warming up! 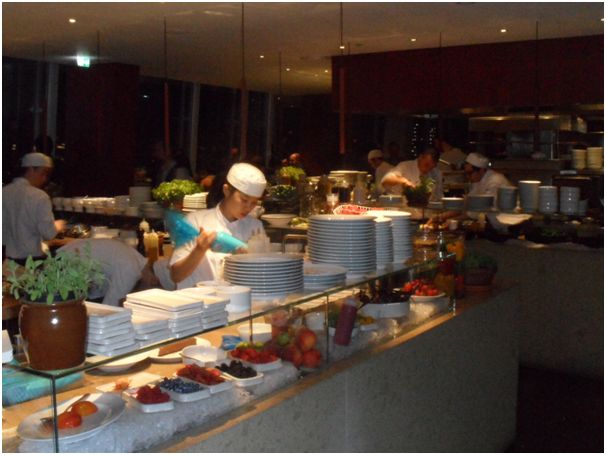 Entering the restaurant area through the open kitchen

You enter Oblix down a short corridor adjacent to the lift which serves all three Shard restaurants.  At the end the reservations are checked and you are quickly led to your table – to the restaurant on the right, or the bar lounge on the left.  One enters the restaurant through the extremely busy open kitchen and past a glass fronted meat storage chiller with appetising looking cuts of beef, hanging poultry etc.

We were led to our table in the window and offered a cocktail or a glass of champagne.  Menus were quickly brought out.  Service was attentive right through without being overpowering – just right.

Its difficult to describe the menu.  Mainstream with a twist might be nearest. There’s definitely an American influence in some of the dishes – perhaps it could be described as Anglo-American-European!  In other words something to match most tastes.

Starters come in at from £7 to £21 (for scallop and lobster ceviche).  Main courses include a couple of rotisserie options – rosemary chicken with skordalia at £18 and duck with mango chutney at £24 – and there was a vegetarian grilled option at £13,  while the standard mains ranged from pork belly at £18 and whole sea bream at £22 up to dover sole, whole lobster or veal chop with gremolata  all at £34.  The lobster price did seem pretty reasonable, but as we didn’t try it we didn’t know how large it would have been.  Other reviews I have seen suggest it is adequate – and good.  It is possible to spend quite a bit more on steaks though.  There’s a massive 800 gram rib eye on the bone option at £65 and there’s a waggu tenderloin/sirloin steak priced at £36 per 100 grams with a minimum size of 200 grams!

We went for the crab cakes (£19) small, but delicious, and smoked salmon on a bed of cream cheese and rocket all atop a flatbread which seemed huge at (£13) – also a good choice.  The combination worked well. 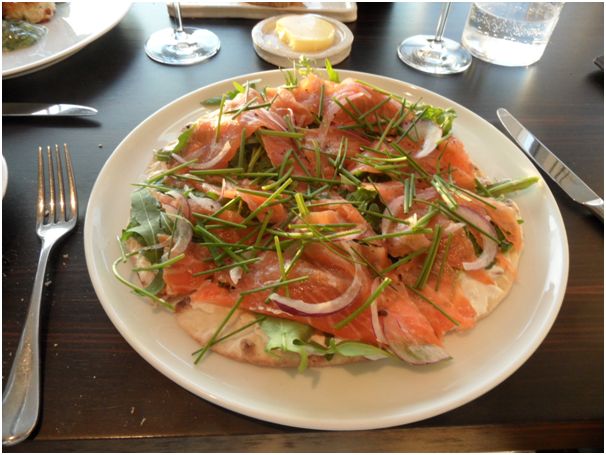 For mains we chose the duck (extremely tender) and the veal chop (a bit fatty and chewy).  We ordered sides of mashed potato, broccoli and carrots cooked with orange and ginger.  All were cooked virtually to perfection, 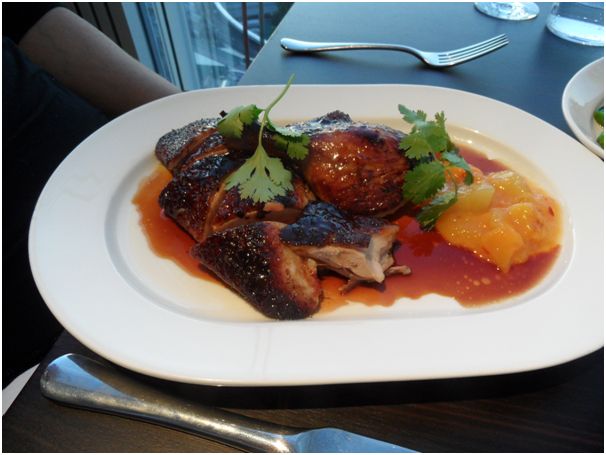 Desserts – my companion chose a chocolate brownie sundae which was pronounced great while I chose a strawberry and rhubarb pavlova which I wasn’t totally sure about because the rhubarb appeared to be uncooked – or at most just blanched, which made it a bit tough and tasteless although overall the strawberries, meringue and cream were nice. 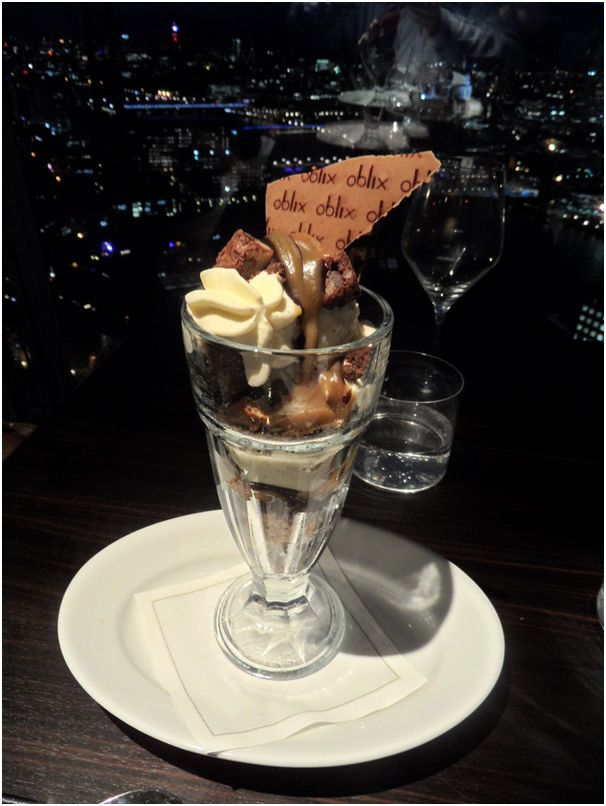 Dessert with a view!  The chocolate brownie Sundae

We washed our meal down with wine by the glass, for which there was an enormous selection – from which we chose an Argentinian torrontes and a New Zealand sauvignon.blanc – both excellent  Unlike most restaurants where wines by the glass are served in carefully measured glasses here the wine was poured at the table and when we had a refill we were presented with new glasses for it.

At the end of the meal we finished with American coffee and decaf – both good.

The damage was around £85 a head including a bottle of sparkling water and the drinks and the coffee plus service.  However one could eat for a fair bit less – or a fair bit more – depending on the menu options chosen

Overall a very pleasant evening.  With a window table it was fascinating to watch what looked like the toy sets of trains leaving London Bridge and heading into Cannon Street, toy boats on the Thames, toy cars on the streets and people like ants far below.  Its hard to grow tired of the views from Oblix and the other Shard restaurants.