The new Galvin HOP – the brothers Galvin’s first Pub de Luxe – in Spital Square by Spitalfields Market – had its official launch party on January 27th, although it had been open to customers since the beginning of the week.  Barbican Life was invited.  Rather noisy with some loud pop music blaring out so it was almost impossible to carry on a conversation – hopefully that was just for the party and is not a general feature during opening hours.

Overall impressions were extremely positive.  Very bright with lots of glass and some impressive decor features.  If the quality of the pub food type canapés (well rather more substantial than the term canapé might suggest) is anything to go by it will become a very popular destination for lunchtimes and evenings.  A look at the menu shows it can offer rather more than just ‘pub food’, although there are certainly ‘pub food’ type dishes available but the Pub de Luxe branding should warn that it is no cheap dining option – prices come in in the mid range for the area. 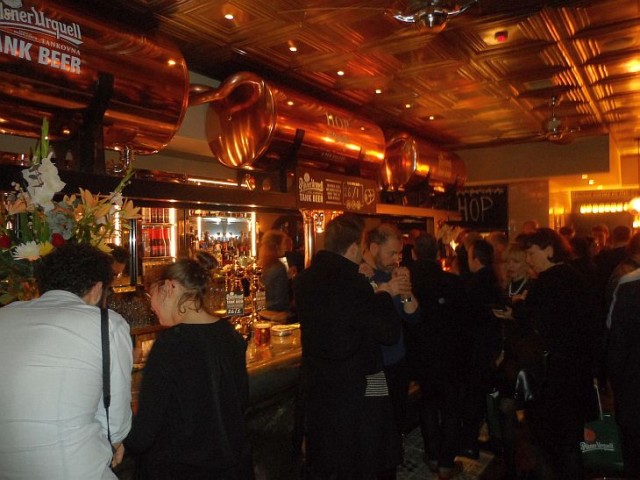 Some will regret the passing of the previous Galvin Cafe a Vin bistro type restaurant which Galvin HOP replaces, but the concept is an interesting one.  There does seem a lot of disposable income among the sector of the public the new concept pub is aimed at.

Galvin HOP is the first of this new dining and drinking concept.  It will be followed with a second in the Chelmsford area which will open this summer if all goes well, and the group is hoping to roll out several others  in the south east over the next couple of years.

Galvin HOP offers Pilsner Urquell (from the original Czech brewery in Pilzn from which Pilsner beers get their name) on tap flowing down from polished copper vessels above the bar.  It offers other craft beers too as well as a full range of wines, spirits and cocktails.

It is located adjacent to the Michelin starred Galvin La Chapelle restaurant and a view through the glass connecting door between the two showed the gourmet restaurant to be completely full.  No recession here!

Galvin could well be on a winner with Galvin HOP, as a more casual option for those who want the Galvin experience and at a lower cost, but with perhaps plainer food.