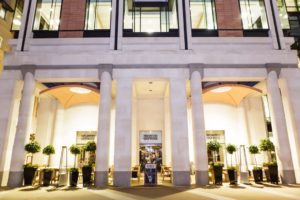 D&D London, which owns and operates restaurants in London, Leeds, Manchester, Paris and New York and the 80 bedroom South Place Hotel close to the Barbican, which is the location of the Michelin starred Angler restaurant, has announced that it will relocate its restaurant Paternoster Chophouse from its current Paternoster Square location to a new address at 60 Ludgate, London EC4M. The reason for relocation is the proposed refurbishment of 1 Warwick Court in Paternoster Square, the building currently occupied by the restaurant.

Paternoster Chophouse, which has achieved national fame due to being the home of Channel 4’s reality TV show First Dates, will close at its current venue at the end of November and reopen at its new address shortly afterwards.

D&D was advised on the acquisition of the site by Leo Feldman of Shelley Sandzer and the interior of the new Paternoster Chophouse is to be designed by Design LSM. Design LSM has also designed the interior of Klosterhaus, D&D’s new restaurant which opens in Bristol on Friday October 2nd.

Des Gunewardena, CEO and Co-Founder of D&D commented “Paternoster Chophouse is a very successful and popular restaurant, particularly given its association with First Dates. We are therefore  pleased to have secured a site only a short walk away from the restaurant’s current location. We are also pleased that our landlord is Land Securities of whom we are existing tenants at Nova, 1 New Change and at Trinity in Leeds”