Bacaro, Barista, Bistrot (with the final T) – all are words which nowadays seem commonplace on the eating and drinking front, but have somehow only become established in the past few years.  What happened to plain Italian, or the bistro (without the final T)?  As restaurants compete, particularly in areas like Clerkenwell which has become a Mecca for dining out, they are increasingly utilising regional descriptive to try and help them stand out and attract new clientele. 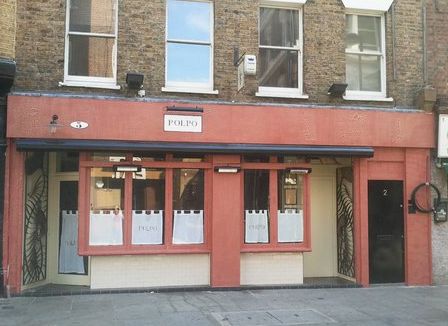 So Polpo Smithfield, which has now been open for a year and a half, in Cowcross Street describes itself as a Bacaro .  It is the third Polpo restaurant – the first having been launched in Soho in 2009 with great success – and the second in Covent Garden in 2011.

So what does Bacaro mean?  Polpo management puts it as a Venetian word to describe a humble restaurant serving simple food and good, young local wines.  In effect, given that it serves its dishes in small plates – thus perhaps needing three or four such dishes to be required for a full meal (as starter and main to keep the hungry diner satisfied.  Thus it is effectively an Italian take on the British idea of a Spanish tapas bar/restaurant.

The décor to an extent is designed to match the ‘humble’ description – plain wooden tables (perhaps a little small), wooden chairs, wooden floor and rustic brick walls.  Wine (even prosecco) is served in small tumblers rather than in wine glasses, etc.

(That the tern Bacaro is entering British restaurant language is supported by another local restaurant, Venezia, in Goswell Road having also also relaunched itself as  Bacaro over the past year.)

Perhaps the advantage of having food served in small portions is that one can share also with a companion diner, and thus take in a variety of different tastes all within the confines of a single meal.  Thus between myself, and my lunchtime dining companion we ordered plates of Aroncini, Leek & pistachio meatballs, Fritto Misto, Duck and green peppercorn ragu and a Pear, gorgonzola and chicory salad. In the event this, coupled with a shared small dish dessert of what was described as chocolate salami, was definitely adequate for lunch for two people.  We washed it down with a couple of glasses each of a perfectly acceptable house prosecco.

As is the nature of shared small dish meals, some appealed more than others, but this may well be as much a matter of personal taste as much as food quality.  The advantage, of course, over a standard starter and main is that one can be a bit more adventurous in one’s choices.  If a particular dish doesn’t appeal in taste as much as the description might have suggested one can move on to something else.  However on the standard restaurant meal, if one chooses a main dish that you find disappointing or not to your taste at all due to the way the chef has prepared it this would probably put a damper on the whole meal.

So saying, our choices were in the main excellent.  Perhaps the Arancini were a little disappointing but this was more than made up for by the other dishes – the Lamb and pistachio meatballs and the Pear and gorgonzola salad proved to be particularly good – as was the chocolate salami dessert.

Cost.  This is obviously much more controllable and very dependent on the number of small dishes ordered.  For us the meal for two plus two glasses of prosecco each plus coffee came in at around £36 per head including tip.  OK not a cheap meal but pretty standard for the area and food quality.  Definitely a good place for lunch or dinner.  Looking at reviews on the internet from individuals these seem to vary from excellent down to unhappy – but the latter seemed to be because either the small dish concept was not well understood, or the no bookings policy in the evenings was not seen as acceptable.

Talking of which, Polpo does take bookings for lunch, but not in the evenings – it is not unique in this no-bookings policy; the ever popular Vinoteca and Burger and Lobster, both around the corner in St John Street also don’t take bookings.  If one arrives at Polpo and no table is available, there is the cosy Negroni Bar in the basement where one can while away the wait with a glass of wine and snack dishes.  The Negroni Bar is also available for private hire.