We last reviewed Enoteca Rabezzana on Long Lane a little over 2 years ago (See Enoteca Buonissima) but were tempted back with the news that the Wine Bar/Restaurant was now under new management with a new chef and a new menu.  It is still an Enoteca with a great range of Italian wines on offer, together with reasonably priced food.  For Barbican residents it is only around 250 metres from the west end of the Estate, and will be conveniently located too for the Elizabeth Line when it opens at the end of next year being almost opposite the Farringdon Long Lane station entrance.

We went on a Wednesday evening and it was very quiet with only one other table occupied.  However we were told that business is very variable in the evenings – sometimes busy, sometimes not – but it is usually busy at lunch times.  On the basis of the food and wine we experienced it does deserve a better take-up in the evenings than on the day we were there. 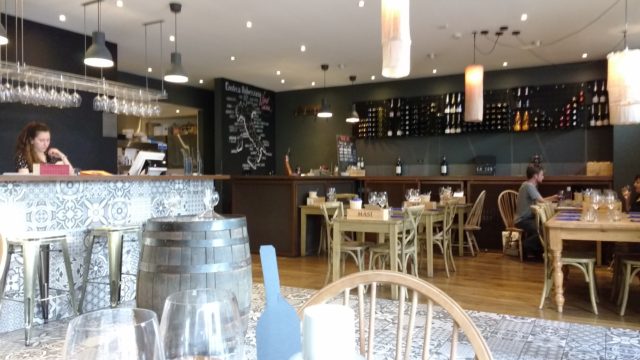 The restaurant area presents a nice ambience. Well spaced scrubbed wood tables – wine racks much in evidence on the walls and as a part of the décor.  At the moment scaffolding outside almost hides the entrance which won’t do anything for passing trade!

The new all-Italian management team took over in June and appointed new head chef Alessandro Andaloro who had previously worked in several top restaurants in Rome.  The concept is to serve traditional Italian style food with menu changes every day.  The team manager is Luca  Campo from Sardinia.

The Enoteca specialises in Italian wines and offers a selection of around 150, with product from five of the wine makers imported directly by Rabezzana and exclusive to London.  The sommelier is Alessio Gatti.  All the staff are Italian, which adds to the Italian ambience and hopefully will not change in the runup to, and after, Brexit!  However their English language skills could perhaps improve a little.

We started with a delightful Prosecco Ca Zen as an aperitif, but didn’t bother to change from this through the meal as it was so pleasant and just had a refill.  It is specially imported from Asolo Docq (Veneto). 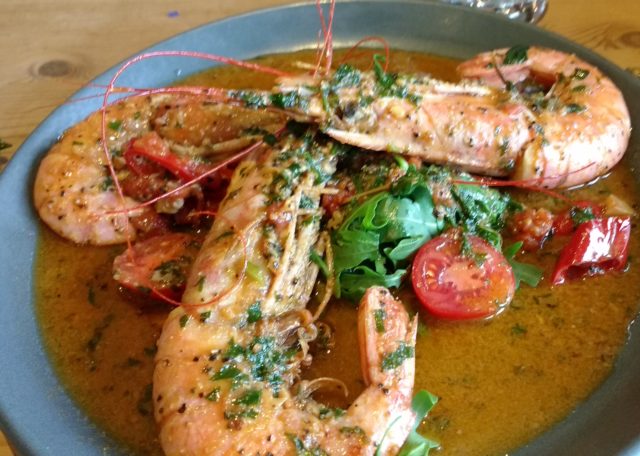 King Prawns in a spicy sauce

As neither of us were particularly hungry we ate almost tapas style.  I had king prawns in a spicy Mediterranean sauce (£18) which I very much enjoyed.  The prawns were massive and meaty and the spicy sauce in which they were cooked was just about right.  I had, in fact ordered the bruschetta al gorgonzola e tartufo fresco (Bruschetta with gorgonzola and fresh truffles – £12), and the prawns as a main course, but the bruschetta got lost in translation somewhere – see comment above about language skills –  and did not arrive, but I was adequately served by the king prawns so did not insist on delivery of the bruschetta too. 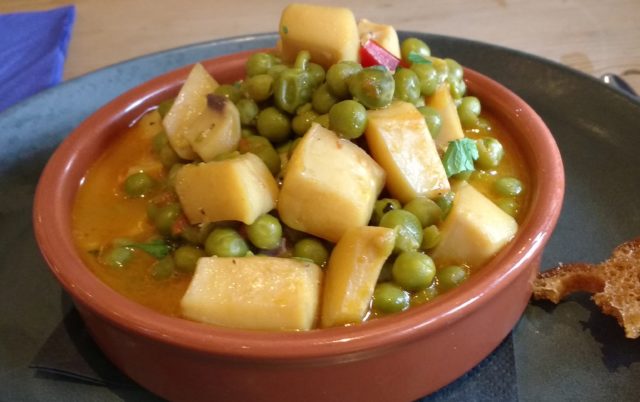 My Companion went for seppie e piselli (cuttlefish with peas at £12).  The whitish chunks in the picture, which look as though they are potato are, in fact, the cuttlefish which was tasty and tender.  Another good starter dish.

Keeping to the seafood theme, but this time trying out the pasta too, we shared the bigoli alle arselle e bottarga (bigoli pasta with cockles and bottarga – £20).  Bigoli is like a thicker version of spaghetti for those who don’t know – I didn’t up until this meal! – while bottarga is a cured, dried fish roe which just adds to the flavouring.  Again all excellent.

There didn’t seem to be a choice of desserts – just the dessert of the day which was panna cotta.  We were fairly full and it didn’t appeal so we just ended with coffees – a decaf cappuccino for me and a regular cappuccino for my companion.  The coffees were good as one would expect of an Italian restaurant.

Overall a very pleasant, and relatively low-cost, meal.  The restaurant has a pleasant ambience and certainly deserves to do rather better in the evenings than was our experience on the evening we dined there.  Being so close to the Barbican it would be a great venue for residents looking for a glass or two of wine and perhaps some food in pleasant surroundings and a nice atmosphere.  The menu is certainly totally different from that we experienced on the previous occasion we were there 2 ½ years earlier, perhaps a little more compact.

The new management has only been in place about a month and perhaps needs time to establish itself which it needs to do, but on our experience the quality of the cooking is excellent, the interior is pleasant and pricing is competitive for the area – it needs to be given the number of other Italian restaurants close by – but it also has some additional great potential when the Elizabeth Line opens late next year with one of the Farringdon station entrances virtually opposite its front door.