The Modern Pantry in St John’s Square – virtually adjacent to the Zetter hotel and its fine Bistrot Bruno Loubet restaurant –opened to great critical acclaim just over 5 years ago (how time flies).  Barbican Life did run a brief review at the time when only the ground floor part of the establishment, now the cafe,  was open, while the main restaurant section upstairs was still being set up.  Now we have, at long last, tried the main restaurant and had an enjoyable Friday luncheon.

The Modern Pantry has been the brainchild of Anna Hansen.  Anna originally trained as a chef under Fergus Henderson of St. John fame and then, in 2001, went on to open the award-winning Marylebone restaurant, The Providores, in conjunction with Peter Gordon and partners. Awards included the prestigious Catey’s “New Comer of the Year Award” 2003, two AA Rosettes for culinary excellence in 2002 through 2005, and Square Meal ‘Best New Restaurant Award’, autumn 2001. Anna also acted as consultant chef to the award-winning Michelin starred New York restaurant PUBLIC. 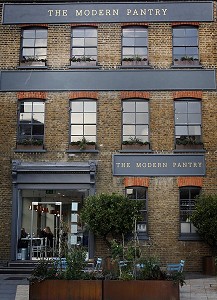 In 2005 Anna left The Providores to focus on developing The Modern Pantry. Since opening, The Modern Pantry has gained 2 AA rosettes from 2008 through 2012 and been listed as a “Bib Gourmand” in the Michelin Guide 2009 and 2010. In 2010 Phaidon published “Coco”, a book showcasing 100 of the world’s top up and coming chefs of which Anna was one.

Anna’s culinary philosophy is driven by the desire to please and excite the palate by renewing everyday cooking with modern ingredients and global inspiration, so expect some interesting combinations of tastes in The Modern Pantry’s food.  This philosophy is followed by Head Chef, Robert McLeary, who has been working with Anna since 2008.

Thus the menu makes interesting reading in its own right trying to perhaps envisage how the various combinations work – some work better than others and some are truly excellent.

For example, our starters were Ajowan, turmeric and krupuk crusted prawns (no we didn’t know what ajowan and krupuk were either) with nam jim dipping source.  Our waitress was luckily very well versed in the dishes – one suspects she may have aspirations as a chef herself – and informed us that ajowan is a southern Indian spice and krupuk is perhaps better known as prawn crackers!  Nam jim sauce is a hot, sour and tangy Thai dressing.  This was a dish where the combination worked brilliantly to make a great starter. 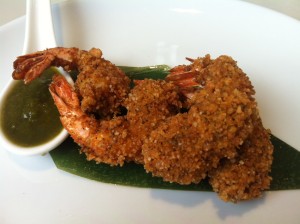 Our other starter was perhaps not quite so successful – Cornish crab rarebit – which was effectively crab served on top of cheese on toast.  In my opinion – and maybe others would disagree – the cheese completely overwhelmed the crab.

Our main courses again were mixed.  We had the pan fried monkfish, with fennel mash, curly kale and New Forest winter chanterelles – a great combination.  Again the other main we chose was perhaps not so successful – Mojo marinated lamb rump, anchovy roast delica pumpkin, purple sprouting broccoli and a Kalamata olive salsa.  While the lamb was beautifully tasty and tender and the broccoli cooked to perfection, one could not really taste the anchovy while the black olive salsa was a bit overpowering. 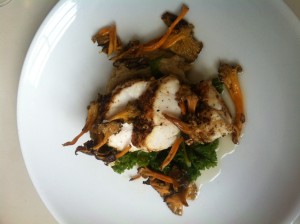 The monkfish – another excellent dish

To some extent the same kind of pattern continued through to the desserts.  Strawberry and pink peppercorn ice cream worked very well as a combination, while Nougatine tuile, apple compote, chipotle butterscotch and toasted oak ice cream was perhaps not quite so successful with the hot (spicy) chipotle perhaps being a little too much for the dish, but was served in little dabs on the plate so could be avoided.

We chose wines by the glass to complement the dishes.  The restaurant menu is quite good in this respect with specific wine recommendations alongside a number of the dishes on the menu.

While we may have had some criticisms of some of the dishes, it was a very pleasant eating experience overall.  The upstairs dining rooms are minimalist as far as decor is concerned and have wood floors, which could perhaps make things noisy if there are exuberant dining groups sharing the space with you – but this was not too much of a problem when we visited.

Cost:  based on the dishes we chose the food came to around £36 a head – but these were mostly at the upper end of the menu prices so one could perhaps get away with around £28 a head.  With a couple of glasses of wine this would have upped the cost to around £48 and sparkling water and coffee or tea and service would have added more.  There is a two course option choosing from marked dishes on the a la carte menu at £21.50.