Time was when the last place you would find a top eating experience would be at an in-house hotel restaurant (apart from in hugely expensive 5* establishments).  This is something which remains true today at many hotels throughout the UK and elsewhere, but among the latest batch of boutique hotels we are finding some which really do deliver the goods as far as a great evening out eating experience is concerned.  I am glad to say that at least one of these has opened its doors only a couple of minutes walk from the eastern part of the Barbican – a little further from the western environs of the complex, but well worth the additional short walk.

This restaurant is Angler – located atop the South Pace Hotel midway between the Barbican and Liverpool Street.  It occupies an extremely attractive space, long and fairly narrow, with sloping windows looking out over South Place and an outdoor terrace at one end where one may also eat when the weather is appropriate (plenty of heaters which makes it usable on cooler days too) and a very cosy small bar area.

But lest long and fairly narrow sounds off-putting, the main restaurant area decor and ambience are great.  Tables have crisp white linen tablecloths – something which in this reviewer’s opinion gives an added plus to the overall feel for the quality that is being delivered. 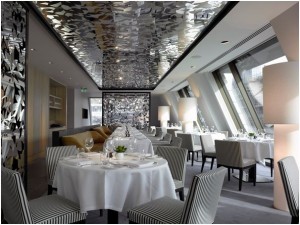 We were seated at the table quickly and friendlily and the menus delivered – a la carte and table d’hote options and a very comprehensive wine list with a good selection of wines available by the glass.  But a great looking menu – seldom have I come across a restaurant menu where it is so difficult to choose because there were so many dishes which met my own personal foodie desires.  There was also what I would deem to be an excellent value set menu at £25 for two courses or £30 for three, with a choice of three starters, three mains and two desserts or the cheese board.  All were extremely interestingly described which made it particularly difficult to choose between the a la carte and the set – in the end I compromised with a starter  and dessert from the former and a main from the latter.

Angler’s head chef, Tony Fleming, came to London to work as a chef de partie for Marco Pierre White – first at the Criterion and then the triple Michelin-starred Oak Room, Tony specialised in seafood in each of his past kitchens and is working hard to build a reputation for Angler as one of the City’s finest seafood restaurants

Since leaving MPW, Tony has worked for Richard Neat in the Oxo Tower, as well as at the Great Eastern Hotel, in which D&D London (the South Place hotel’s owning company) had a share in its previous guise as Conran Restaurants. Most recently, Tony was executive chef at One Aldwych in London.

Prices: apart from the good value set menu, and perhaps a rather expensive shellfish platter starter, the individual dish prices on the a la carte menu are probably about average for a classy restaurant in the City.  Most starters come in at between £8.50 to £18.00.  Mains in the £20-30 range and desserts between £6.50 and £7.30 (artisan cheese selection £10.50), so not a cheap evening out, but which do make the set menu price seem extremely attractive.

As the name suggests, Angler is primarily a fish restaurant, but does have a limited selection of non-fish dishes to satisfy those who are not into the seafood scene and these in themselves seemed sufficient to satisfy most carnivores’ tastes – roast partridge, loin of hare or fillet steak among the mains for example.  But it is obviously seafood which dominates, including three different oyster varieties, sevruga or osietra caviar (for those with really extravagant tastes), langoustines, clams, crab or the mixed shellfish to start with among the plain appetiser options, fish soup, seared scallops, shellfish cannelloni, shellfish cocktail (a major improvement on the old standard prawn cocktail), or tuna tartare as the principal seafood starters.  Mains include a seafood mixed grill, cod cooked in a mariniere of cockles and squid, dover sole (although they had run out on our visit through heavy demand at lunchtime), Angler and lobster pie which came highly recommended by our waiter, roast turbot, halibut fillet, steamed wild bass – a great choice.

On the set menu a fascinating starter in oxtail and cockle broth, a ballotine of ray wing and crab, leek and potato veloute, or line caught cured mackerel fillet.  Mains: Seared sea bream with parsnip and cumin, smoked haddock and mussel pie with soft quails eggs and baby leeks, or for the non-seafood eater braised guinea fowl with truffled macaroni, crispy cured ham and black cabbage.

In the event I went for fish soup off the main menu and then the smoked haddock and mussel pie off the set menu – perhaps among the less adventurous dishes but two which really appealed to my tastebuds – and I wasn’t disappointed.

My dining companion chose a goats curd and beetroot salad as a starter and then the wild sea bass as a main, both of which were declared to be excellent.

I have to say we were both very impressed with the food quality, ambience and service.  We allowed wines by the glass to be chosen for us by the restaurant manager, Timothee Chatelet – all excellent matches.  Any background music was very subdued making the restaurant a great place to make conversation – perfect for a dinner a deux, a business meeting or just a great meal out with friends.  Highly recommended.

As is usual when I write reviews I check out other people’s views on the internet to see if I’ve just been lucky or unlucky on the night compared with others’ experiences.  There was a slightly sniffy review in the Telegraph, although the reviewer did have the grace to comment that the main courses were ‘gorgeous’ and a very complimentary one in the Evening Standard from the professional reviewers.  In general the reviews from individuals I found on the web were almost without exception, highly appreciative of the atmosphere, service and food.

Additionally – award-winning food writer and stylist, Ravinder Bhogal, will take up residence at the South Place Hotel to host the rather suggestively titled ‘Fork Me, Spoon Me’, an original series of supperclub dinners which will be available every Saturday throughout February, and with a different menu every week.  The supperclub will see Ravinder mix unusual flavour combinations to create what the hotel, or perhaps Ravinder herself, describes as a truly exclusive new dining experience involving what are ‘pulse-quickening and romance-inducing ingredients, including chilli, rose and Champagne, to set the tone… Guests looking to make the night last will also be able to book an overnight stay in one of South Place Hotel’s 80 bedrooms – ideal for anyone looking to raise the temperature outside of the kitchen.  Rates start from £65 per person for dinner, or £349 for two sharing, for dinner, bed and breakfast.’