It’s a funny place, the Old Street area. Part City, part not, part workspace, part residential, part definitely an area, part just passing through.  It’s unisex bathrooms and recherché music and office blocks with restaurants in them.  I’m not complaining – why not try to be all things to all people.  But it has to suit. 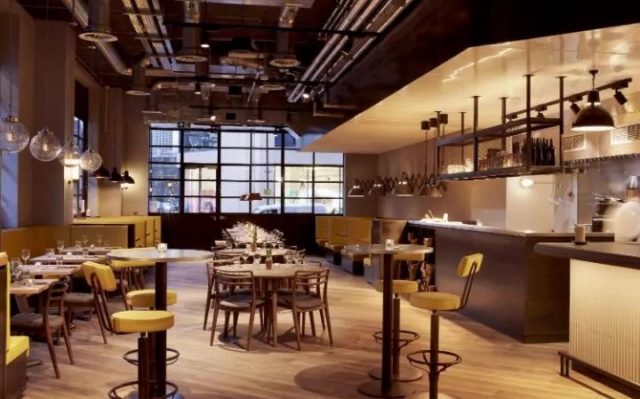 Now, I remember Rome.  I remember visiting my Aunt and Uncle.  I remember going to the market.  And I remember in particular warm, salty, soft but chewy focaccia, fresh from the baker and rushed home in a Cinquecento that survived 33 years outdoors on the eternal streets.

The American couple on the table next to us turned the (nicely offered) focaccia and olive oil down: she was off carbs.  I just wasn’t sure about it: it was what my parents would say was “very pleasant, but not real focaccia” – while eating the lot.

The wine list is good and interesting and sensibly priced from £22 upwards (though why would you have whites, reds and “skin-contact”?).  We didn’t try any cocktails or sparkles, but the bar seems well-stocked; perhaps for the office workers whose foyer you’re almost sitting in.

I like menus on one page.  You can choose from an interesting selection of antipasti and pasta dishes.  We wanted to sample a few of these at the expense of a main and so had the following: anchovies and stracciatella (a gorgeous gooey spread of mozzarella di bufala) on grilled bread, then something of a house special, a starter plate of bucatini cacio e pepe, tellicherry pepper & pecorino, plus fried sage leaves with honey vinegar that I had read were amazing, and gnocchi alla romana (not to be confused with the gnocchi parcels often found in restaurants).  We were looked after by a lovely, friendly and enthusiastic waitress who offered suggestions, explanations and attention.  (However, someone wanting to be taken seriously in the Italian restaurant space should ensure their staff at least know that words sending in “i” are invariably plural (not as in “How is the antipasti?”).) 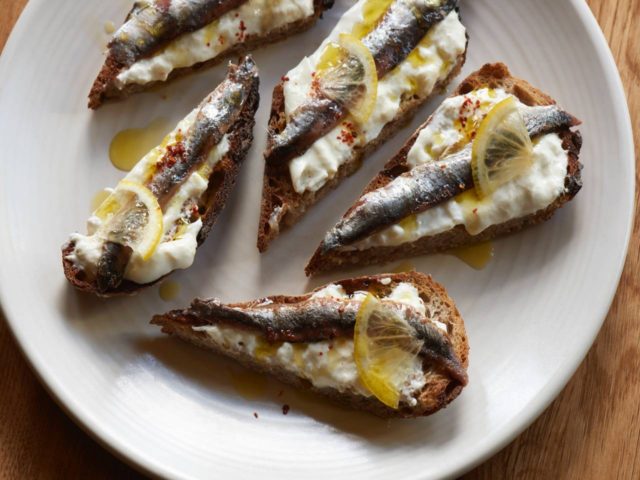 The best was the juicy, sweet anchovies on a delicious base with olive oil and chili flakes (though nothing homemade here) and the bucatini (extra thick strands of pasta) that were homemade and cooked to perfection, with just salt, pepper and pecorino cheese. Peasant food at its best.  Indeed, better than the last time I was in Rome.  I didn’t really understand the sage leaves: why take something so delicate and light and deep fry it in so much batter that it is lost? Unfortunately, the grill had been applied an absolute fraction too long to the top of the gnocchi and even very slightly burnt parmesan is bitter.

From the mains, which included onglet steak, pork chop, chicken meatballs and bream we chose to share the saltimbocca, wanting to leave a little room to try a dessert. It was cooked in the Roman way (with sage, marsala and butter) and served with deep green spinach.  It looked delicious, and was very tasty, but we both found it over-sweet and slightly overcooked. 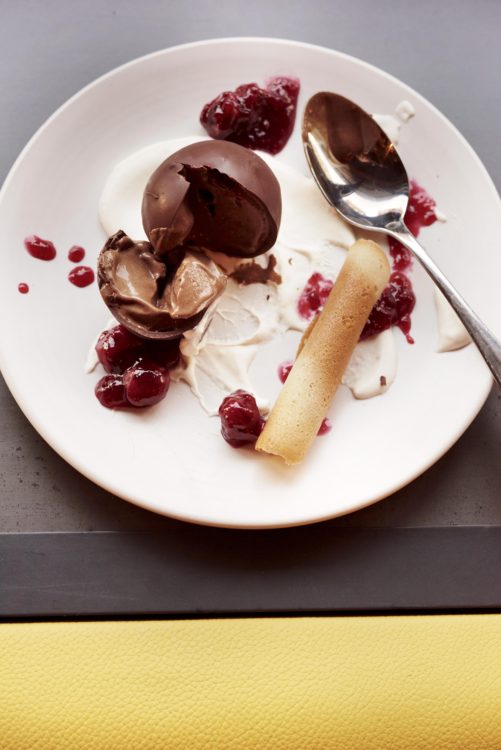 Desserts sounded lovely: lemon tart, tiramisu, almond, lemon & ricotta cake, campari & orange ice , but the one that stood out for us was the chocolate & sour cherry tartufo ice cream with whipped cream. It was excellent.  (I note that of the 5 cheeses on offer, only 2 were from Italy, which seemed as strange as it is unnecessary.)

Prices seem fair and service friendly.  I feel I owe it to future attendees to point out that, personally, I didn’t like the way the lighting meant my head kept casting a shadow over my plate, that the smells from the kitchen kept seemingly blowing our way and that the music was tediously cool.  Maybe our table just wasn’t in the right place.  But maybe it’s me.  After all, it was 7pm in a new restaurant on a Monday evening in February and it was pretty much full.  I hope they do well.