Scena Mundi’s “Sad Stories of the Death of Kings” offer!

Scena Mundi’s “Sad Stories of the Death of Kings” offer!

Sad Stories of the Death of Kings

Reviews for Scena Mundi’s “Sad Stories of the Death of Kings” season have triumphed, revealing the strength of this ever blossoming company, resident at St.Bartholomew the Great by Smithfields Market. However it is a key point in the company’s rise as it strives to make a commercial success of such a wonderful production so as to drive the next stage. 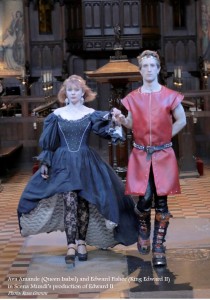 Championing Artistic Director Cecilia Dorland’s passion for verse and classical literature, “Richard II” and “Edward II” are thrust into another level under the soaring medieval edifice of St.Bartholomew the Great, the oldest religious building in the City.
Two different treatments signal the courage and drive of Dorland’s company yet with all the key Scena Mundi hallmarks; stunning costumes by Penny Rischmiller, lighting by Nathalie Gunzle and choreography by the National’s Darren Royston.

The classically faithful “Richard II” stuns with the delicate delivery of the verse and by the beautiful processions and breathtaking costume. With heavyweight  productions at The Globe and nearby Barbican opening later in the year, Scena Mundi’s Richard has been applauded as one of the best there has been:

***** LondonTheatre1 – “The Globe, which I love, pales into insignificance in the face of this C12th religeous building… I cannot think of a better setting. Dorland uses the space perfectly.”

**** The Stage – “A steadfastly historical production… which champions the poetry at the piece’s heart.”

“Edward II” takes on an alternative style inspired as much by Christopher Marlowe’s own reputation as by the tragic themes of the play itself;

1980’s rock replaces classical strains and a confidently alternative costume design draws inspiration from the ’80’s; seductive and at times debauched, it takes cues from Jean Paul Gaultier, the leather fetish scene and 1980’s rock. Bankers suits cut over chainmail and leather, and spike and eyeliner are not left to the ladies. The up-tempo feel of the production drives the energy of Marlowe’s drama that cuts so swiftly from scene to scene. What it may lack in Shakespeare’s rhyming couplets it more than makes up for in high drama. And then there is THAT poker scene!

**** LondonTheatre1 – “A ‘theatre’ visit like no other…it was a remarkable use of a church. The whole cast were fantastic.

**** Everything Theatre – “Dorland and Rischmiller have to be commended for the surprising but enjoyable glam-rock aesthetic. What a great location the shadowy, echoing interior of Great St.Bart’s is; you’ll just have to find out for yourself!”

As with any theatre company in the current climate Dorland’s Scena Mundi is at a tricky crossroads. Landing a residency at St.Barts was a tremendous coup, yet drawing an audience to the area is at times tricky and of course a professional cast require professional fees! The calibre of the reviewers is a fantastic reflection on the quality of Dorland’s work yet without further publicity companies such as this will all too easily disappear.

With a highly promising future at the heart of a culturally significant area of the City of London, these are productions not to be missed. With the right support it will not only champion incredible new talent but help to promote and rebuild the incredible, yet crumbling St.Bartholomew the Great.

Sad Stories of the Death of Kings

Tickets and dates of shows: www.ticketsource.co.uk/scenamundi