Martin Clunes explains why after years of playing Doc Martin his wife convinced him to take a chance with a new ITV drama about Sherlock Holmes author Arthur Conan Doyle.

Martin Clunes knew that that his new project was big news as soon as he started telling people about it. The BAFTA winning star of Men Behaving Badly is morphing into Sherlock Holmes author Arthur Conan Doyle for ITV’s new three part drama series Arthur & George, which airs in March.

After conversations with friends, well-wishers and tourists while shooting on location last year, Clunes quickly realised just how much curiosity there is about the Sherlock Holmes legend – even if not everybody has their facts straight. 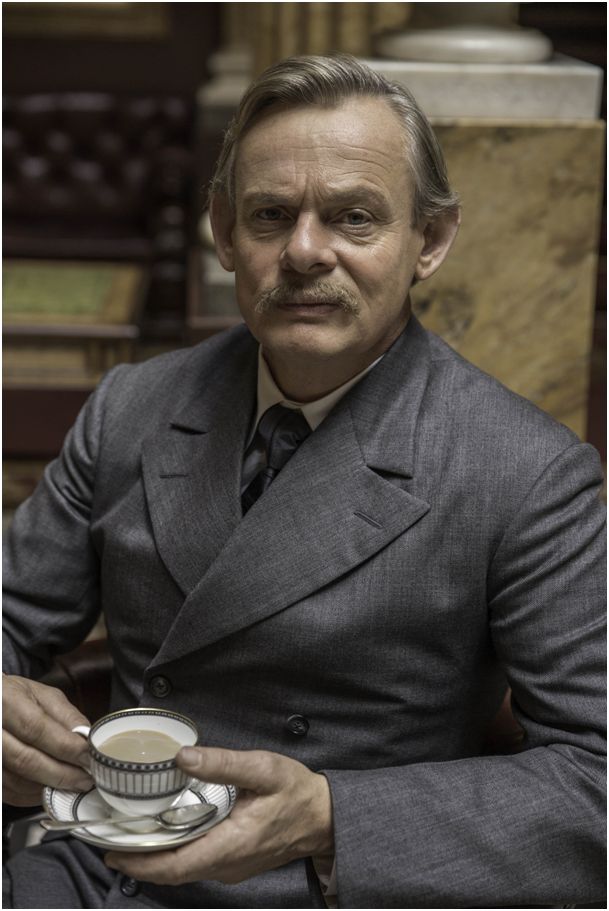 “I knew that there was a lot of interest in Sherlock Holmes, obviously, and my cousin (late actor Jeremy Brett) did most of the stories for Granada when I was young, so that’s always been there. But there’s so much intrigue all over the world. Some people aren’t sure as to the story. People genuinely wonder whether Sherlock Holmes is real. Is Arthur Conan Doyle real? Was one of them Prime Minister? So when I told people I was doing Arthur and George, people were like – ‘so, is Benedict Cumberbatch going to be in it?'”

As it turns out, no, Benedict Cumberbatch is not reprising his Sherlock role for Arthur & George, but he wouldn’t fit the bill in any case. Arthur & George is telling an altogether different perspective on the infamous sleuth’s story.

Based on the bestselling, Man Booker prize nominated novel by Julian Barnes, Arthur and George is the real-life account of Conan Doyle’s own personal detective investigation into the case of George Edalji, jailed in 1903 for a string of bizarre attacks on livestock in a small Staffordshire community – a case which eventually led to the formation of the Court of Appeal.

Clunes admits to being “out of his comfort zone” with the project and if it wasn’t for his wife Philippa Brathwaite – who produced the drama – he would never have got as far as filming.

“All I’ve done for the last few years is a bit of Doc Martin and petted some animals in a documentary and that’s about it,” Clunes says. “Just really nice and cosy and comfortable things, and I’ve been happy to stay at home or just do the work that I’m lucky enough to do. If it hadn’t have been my own wife asking me to do it I probably would have done a runner! But I didn’t want to lose face.”

If that sounds like a joke – and as one of the nicest guys in television, the 53-year-old does love to lighten the mood with a gag – Clunes is actually being deadly serious.

“I bail out of things quite frequently for one reason or another. Worse than that – I’ve been signed up to do things and then got cold feet. I won’t name them as other people go on to do them.”

Has he ever regretted passing on any of these opportunities? “Never once!” he exclaims. “I’ve only ever punched the air with joy when I’ve managed to get out of something, even when they have been a success. And I told Daniel Craig that! He has my blessing…” he deadpans.

Thankfully, Clunes is so happy to have taken on this role and actually thanks his wife for forcing him to make good his word.

In the end, his main concern was “telling Julian’s great story” – and doing justice to the character of Conan Doyle.

“You can be accused of getting it wrong, which is something you worry about. If you’ve made somebody up, you’re an instant expert on that person! If you’re playing [fictional character] Mr Shepherd in Nativity 3, then you’re the only person that knows about Mr Shepherd. But you can also get hamstrung by worrying about things like looking like a real character. We made concessions to looking like Conan Doyle, but of course I still look like me. You can get hamstrung about things too much. It’s actually about the story. That is the important thing.”

In fact, Clunes is so pleased with the result that he is open to the one-off drama becoming a series in the future.    “Who knows? It’s good for television that there are returning dramas and there were other cases that Conan Doyle did look into. And it would be fun, but Julian will have to get on with writing the story!”    We await Julian Barnes’ follow up novel with bated breath…