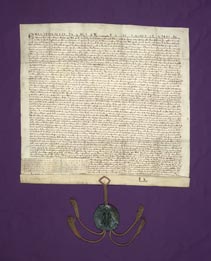 In response to the 800th anniversary of the Magna Carta, the City of London Corporation has developed the Heritage Gallery to showcase a selection of heritage treasures it holds in trust for the nation.

These artefacts are rarely on public display and so this gallery provides a unique opportunity to view up close objects that tell London’s story, all from within its historic heart. Located within Guildhall Art Gallery and adjacent to London’s Roman Amphitheatre, the new Heritage Gallery will launch with an exhibition that includes the 1297 Magna Carta (complete with the first ever ‘post-it’ note!), before rotating the main exhibit with other pieces that include the 1067 William Charter and the Shakespeare Deed.

Magna Carta was fundamental to defining individual freedom and the rule of law, and laid the foundations for modern democracy. The City of London had an active role in the events that led to Magna Carta’s creation in 1215: the Mayor (today known as the Lord Mayor) was appointed to see, along with the barons, that its provisions were carried out and the City of London is the only place to be specifically mentioned in Magna Carta.

Curated by London Metropolitan Archives (LMA), as well as Magna Carta the first exhibition will also include:

• Cartae Antiquae, a volume which contains copies of charters and statutes covering laws enacted between the reigns of Edward III (1327 onwards) to the accession of Henry VII in 1485

• Two portraits of City of London Aldermen from approximately 1447

• A poster for a recruitment meeting held at Guildhall on 4 September 1914.

This first exhibition will run until 29 January 2015. For further information about the collections held at LMA visit the LMA webpages.