Shakespearean fun on the river

Shakespearean fun on the river

To celebrate both the 400th anniversary of the death of William Shakespeare and their commencement of tourist related river services from Bankside Pier, right outside Shakespeare’s Globe Theatre, City Cruises is launching a month of Thames tourist-oriented trips on some of their river boats featuring Shakespeare-related entertainment performed by specially employed actors. 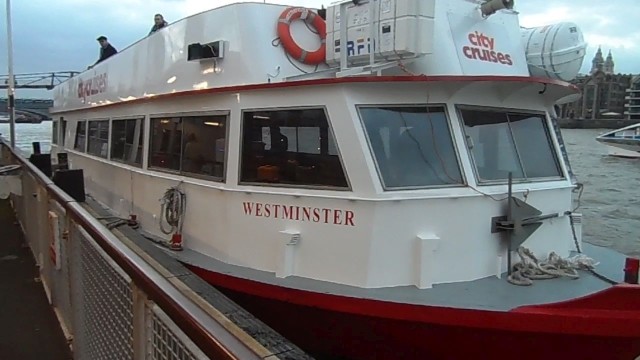 The sightseeing cruises, which will take place during April, will include performances of Shakepeare’s sonnets, sketches and scenes, including a montage of Shakespeare’s insults, – a scene built of insults from a variety of plays including A Winter’s Tale and Much Ado About Nothing. The performers will also demonstrate how regularly we use Shakespearean language in our lives and re-enact the story of Hamlet in just five minutes, with audience participation encouraged.

The daily trips will transport guests to the Shakespearean stage, as actors wander the boat performing snippets from his most celebrated works. Relive Romeo and Juliet, take part in The Tempest and mingle with Macbeth. 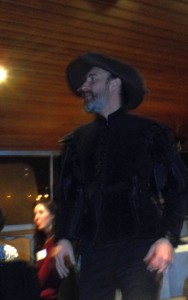 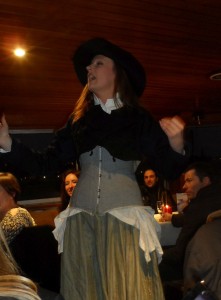 Barbican Life was invited to a launch party to publicise the trips which, if what we experienced is a good guide, should provide fun 50 minute sightseeing trips as the boat sails past London’s most famous landmarks, from Big Ben and the Houses of Parliament, to Shakespeare’s Globe and St. Paul’s Cathedral.  The only problem perhaps being that the Shakespearean wit and humour as demonstrated by the actors may mean that some of the sightseeing element of the cruises will be diminished by attention being given to the hugely enjoyable scenes being set by the actors.

Guests at the launch party were treated to the five-minute Hamlet presentation, including some pretty non-demanding audience participation, performed with great humour by a team of two young actors.  And then the almost side-splitting trading between the two of an array of Shakepearean insults.

City Cruises also suggests that if you want to make it a fully Shakespearian day then pop a little extra on your ticket as you go through their booking process – and add a Shakespeare’s Globe Exhibition and Tour. You will be able to see and hear the story of both Shakespeare’s London and the amazing recreated theatre that now stands proudly by the river bank.  For more details visit www.citycruises.com .