The giant jewelled salamanders have disappeared from the Museum of London roundabout and been replaced by a mysterious gathering of pink stickmen dancing around the rotunda. All this can mean only one thing – a new exhibition at the museum has opened. Kate West went to see the new show.

Taken from Sir Arthur Conan Doyle’s 1903 short story ‘The Adventure of the Dancing Men’, the pink stickmen on the London Wall roundabout herald the new Sherlock Holmes exhibition which opened at the Museum of London in October. Hot on the heels of the brilliant Cheapside Hoard show, Sherlock Holmes: The Man Who Never Lived And Will Never Die is another excellent exhibition from our local museum. It is well-timed as the popularity of Conan Doyle’s hero has never been higher with the hugely popular BBC Sherlock series starring Benedict Cumberbatch and Martin Freeman and the Hollywood movies starring Robert Downey Jr and Jude Law. 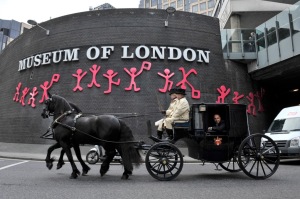 Writer Anthony Horowitz, author of ‘Moriarty’ a new novel set in the world of Sherlock Holmes, driven in a Hansom cab around the Museum of London rotunda. © Museum of London

Sherlock Holmes is the most famous fictional detective of all time. And if the answers to Robert Elms’ regular ‘Who is your favourite fictional Londoner?’ question to his guests on his BBC London radio show is any way to judge such things then Sherlock Holmes holds that title too. For over 125 years, generations of actors, scriptwriters and directors have brought us a never-ending stream of film, TV and theatre adaptations of Conan Doyle’s original 4 novels and 56 short stories. The appeal of this character is remarkable for its endurance and longevity.

Arthur Conan Doyle, Scottish doctor and aspiring writer, first conceived Sherlock Holmes, the world’s first consulting detective, in 1886. One of the most exciting exhibits in the whole show is the famous Southsea Notebook, in which Conan Doyle sketched out his embryonic ideas for a new detective story. In the notebook we can see the first ever lines to be written in a Sherlock Holmes tale, “The terrified woman rushing up to the cabman…” written in Conan Doyle’s own handwriting. For a serious Sherlock Holmes fan, seeing the original title ‘The Tangled Skein’ crossed out and replaced with ‘A Study in Scarlet’ – the title of the very first Holmes novel – is a massive thrill. 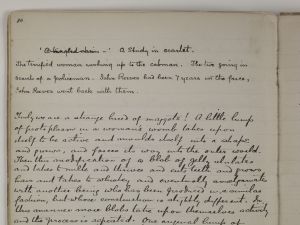 Southsea Notebook Volume 1 1885-88. © Private Library of ConstantiAlongside the notebook is a page of notes, not seen on public display since the 1951 Festival of Britain, where Conan Doyle refers to “Sherrinford Holmes” and “Ormond Sacker”. The two characters who would of course later become Sherlock Holmes and John Watson. 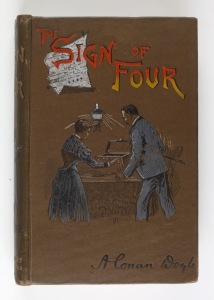 Sidney Paget, who illustrated the stories in the Strand magazine, captured the essence and spirit of Sherlock Holmes. Paget brought Conan Doyle’s stories to life and firmly sealed the image of the character in the minds of Sherlock Holmes fans across the world. The deerstalker hat, as synonymous as the magnifying glass, the violin and the tobacco pipe to our image of Sherlock Holmes, was entirely Paget’s addition and was never mentioned by Conan Doyle. 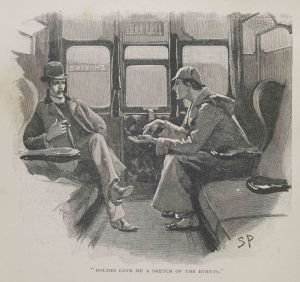 Along with the many examples of Paget’s Sherlock Holmes illustrations on display here is a lovely exhibit – a silver cigarette case, engraved with the words ‘From Sherlock Holmes 1893’ which Conan Doyle gave to Paget, reflecting Paget’s status as both personal friend and illustrator to the author.

One of the highlights of the show is a rarely seen and newly conserved painting by Sidney Paget of Sir Arthur Conan Doyle, on loan from the Musem of Sherlock Holmes in Lucens, Switzerland. Conan Doyle was aged 38 at the time of painting, although he looks rather older, and at the height of his fame. The painting was completed shortly after Conan Doyle had killed off Sherlock Holmes at the Reichenbach Falls in ‘The Final Problem’ and the author was already resisting the call from fans to bring back his hero detective. 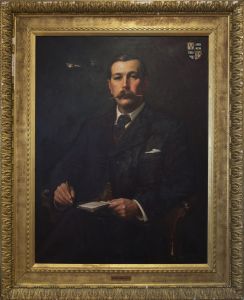 The setting of the Sherlock Holmes stories is so fundamental that London appears to be like another character in Conan Doyle’s work. His Holmesian stories have undoubtedly shaped how we view and imagine our capital city. To reflect that fact the exhibition is as much about the London that Holmes inhabited as it is about the great man himself. In The London of Sherlock Holmes section of the exhibition there are dozens of paintings, prints, photographs and drawings from the time on display, many drawn from the Museum of London’s own rich collection of images of the capital. A number of the images naturally depict the melancholic foggy London so well known to readers of Victorian novels – the best of these include an evocative misty and watery view of Charing Cross Bridge by Claude Monet and some beautiful lithographs of the Thames by James McNeill Whistler. Others portray the people of London – from members of the highest social ranks to the lowest, poorest citizens and all the types in between that populate the Sherlock Holmes stories. Joseph Pennell’s monochrome works are particularly redolent of the period and show street lights reflecting off rain-soaked city roads and the shopping streets of London bustling

It is astonishing that Conan Doyle was able to set his Sherlock Holmes stories in London as he barely knew the city at all. He was an Edinburgh man born and bred and although he briefly lived in Central London he moved out almost immediately to the London suburb of Norwood  London, when Conan Doyle was writing, was a newly modern metropolis with advanced communications and the best transport network in the world. Apparently Conan Doyle relied on the Post Office Directory, tube maps, railway timetables and London street maps to guide his protagonists around a complex city that he was himself quite unfamiliar with. Holmes, of course, had no need of maps as he held an encyclopaedic knowledge of London in his head!

There is a strong filmic element to the exhibition with a wall of screens showing clips from many of the television and movie adaptations, featuring different actors who have taken on the role of Sherlock Holmes over the years including Peter Cushing, Jeremy Brett and Benedict Cumberbatch. Even the famous Belstaff coat worn by Cumberbatch is on show. 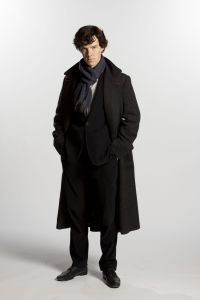 And what about those pink stickmen dancing around the rotunda? They spell out a cipher message for visitors. Not ‘The game is afoot’ as I overheard being confidently asserted by some visitors on the footbridge. No, it is in fact the coded message sent by Sherlock Holmes to lure the villain to a meeting in the denouement of the short story ‘The Adventure of the Dancing Men’. Holmes’ message is: COME HERE AT ONCE. And you should obey the great detective’s command.

It is FREE, fast-track entry for Friends of the museum and FREE for children under 12.

Family Events at the Museum of London

Related exhibitions at Museum of London

He wasn’t an easy gentleman to describe

The Mind Maze features a family of free standing, moveable structures for the foyer of the museum – representing the enigmatic inner workings of Sherlock’s mind. The beginning of each story is marked by a version of Sherlock’s front door; visitors are invited to look at, touch and walk around these curious structures and attempt to unravel them.

Each of the structures act as a puzzle or representation of a particular Sherlock case, with cryptic symbols and motifs found within Sir Arthur Conan Doyle’s world of Sherlock Holmes. Visitors to the exhibition have the opportunity to absorb themselves within the clues and attempt to decipher the stories.

About the Author: Barbican Life